SYNOPSIS: Ghost-Maker is living up to his spectral name as Batman scours Gotham City for any trace of him…but this deadly new vigilante is going to prove a bloody point to The Dark Knight by murdering both Clownhunter and Harley Quinn. That is, unless they kill each other first! 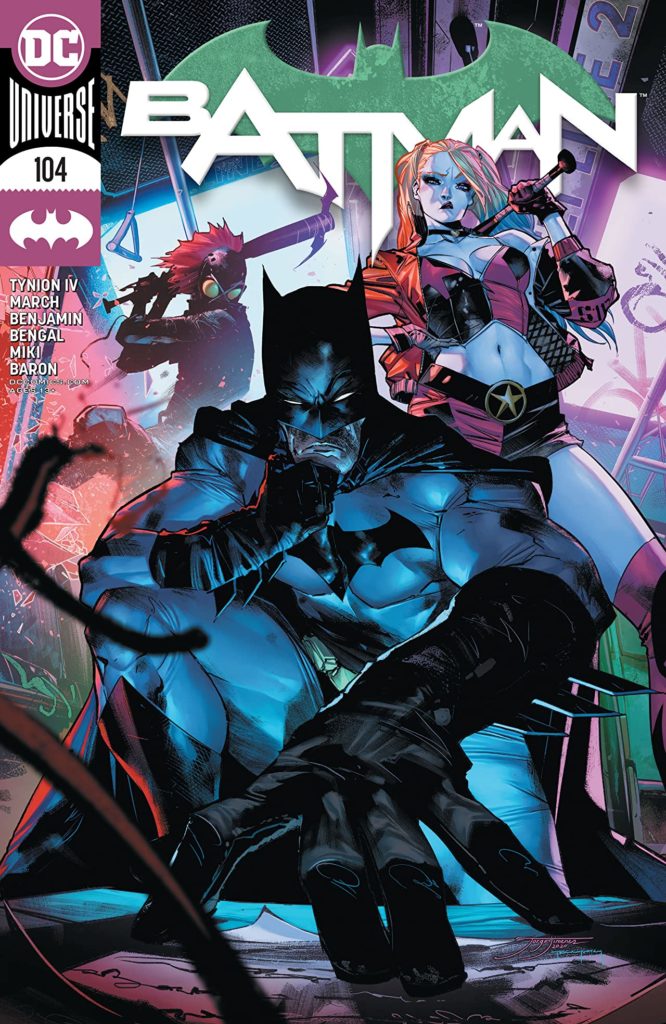 I’m trying to avoid falling into a habit when writing my reviews for BATMAN by James Tynion IV. With the run thus far being very up and down, it’d be easy right? For example, Issue 101: good. Issue 102: meh. Issue 103: good. So 104 should be “meh”, right?

Here’s a quick setup: Ghost-Maker has Batman, Harley Quinn, and Clownhunter tied up in a creepy room. Nightwing patrols Gotham City while speaking with Barbara Gordon. There’s a flashback inside of a flashback. Clownhunter has free rein to do whatever he wants.

That’s a generic overview, but inside each plot point lay something frustrating. For one, there are too many artists involved in this issue. We open with some great art, then go to bland, then okay, then good, then bland again. It’s oof, and jarring. With four people involved, it just feels jumbled together and the end result is inconsistent and forgettable.

As for the story itself, Tynion has set us up with some interesting threads that just fall frustratingly flat here. The scene with Batman, Harley, and Clownhunter SHOULD be good and have us counting down to the next issue. Clownhunter (who I’m just not caring about) SHOULD be empathetic and have us drawn in. Instead, it’s dry and missing all elements of a thriller.

The rest of the issue was “meh”. A flashback inside of a flashback gives us more insight into Bruce’s history with Ghost-Maker, but feels very exposition-heavy and wasn’t too dramatic. A few other members of the Bat-family pop up but I already forget why.

I’m approaching each issue with an open mind. James Tynion IV is a talented writer, but his BATMAN work isn’t doing it for me, keeping me from recommending you spend $8 a month on this book. With interesting setups, signs point to the lack of execution. Hopefully, this wraps up in the next issue, and the two months of “Future State” will help wipe the slate clean.

I’m not trying to be mean because I respect everyone working in the comic industry. It’s just BATMAN should be a must-own/read, and it’s simply not. – Ryan Lower