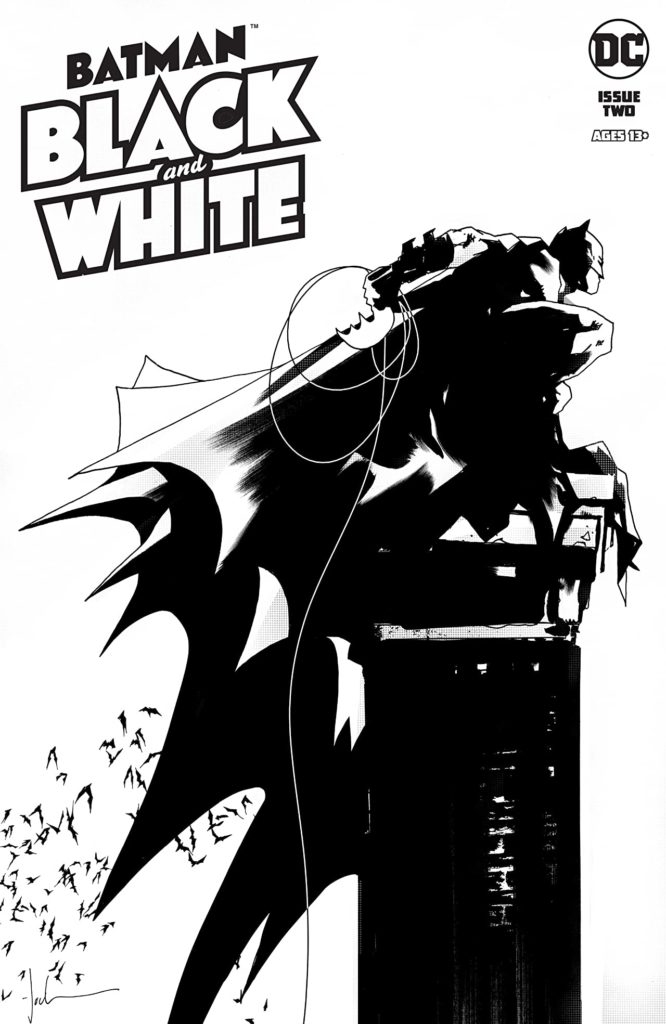 Tom King is pulling an extra shift this month in the Bat Cave as he reteams with his frequent collaborator, Mitch Gerads to bring us the tale of “The Unjust Judge”. Unsurprisingly, this tale is told utilizing a 9-panel grid pattern, a favorite of the pair, and as such, it is utilized well and to great effect. King brings feelings of despair and hopelessness, no surprise there, but also salvation. Whose? Well, I’ll let you decide for yourself, but seeing the Dark Knight so vulnerable was very powerful.

The second story, “All Cats Are Grey”, completely shifts the tone for the book. Sophie Campbell pulls double duty, serving as writer and artist, and brings a great sense of play as Batman and Catwoman engage in a game of cat and bat. Campbell makes deft use of the format, eschewing dialogue and letting her art and the coloring speak for her. I love the page of the wary white cat, serving as a metaphor for Batman, turning away from Catwoman, but then glancing back, just black eyes, ears, and nose against the stark snow. It’s a fantastic visual. Campbell also makes allusions to Batman Returns with the snow setting, Batman’s yellow oval, Catwoman’s black suit, and that ending mimicking a very iconic scene. I had a lot of fun with this one!

The yellow oval love continues with Gabriel Hardman’s art as he co-writes “The Spill” with Corinna Bechko. The husband and wife pair have combined physical peril with a unique perspective on the Batman/Joker “relationship”. I appreciated their fresh take on the dynamic and Hardman’s draftsmanship is detailed and dramatic. It’s no surprise that he has storyboarded films like Ford v Ferrari, Logan, and The Dark Knight Rises.  While he does use some “widescreen” style panels in his layouts, he doesn’t limit himself to that framework and offers a refreshing mix of visuals, my favorite being when the Dark Knight gracefully bursts out of the water. After reading this, I resolved to finally get around to reading their Green Lantern: Earth One that’s been languishing on my bookshelf behind everything else I need to read!

Dustin Weaver goes for the Team Yellow Oval hat trick with his story, “Dual”. Weaver’s art is chock full of little details and there is a definite inspiration taken from 1989’s Batman. It’s mesmerizing to look at his interpretation of Gotham City, particularly with the dueling Batwings. His art is stunning and his story is just as compelling as we see The Batman’s dark doppelganger wreak havoc on the populace for unknown reasons, stumping the World’s Greatest Detective. The stunning revelation at the end left me with a plethora of questions and a feeling of disappointment as I’d love to get more answers and see this story come to a proper conclusion.

David Aja brings the issue home with his story, “The Devil Is in The Detail”. Aja’s entry is the most unconventional of the lot, taking on the form of a newspaper strip, “The Batman”, published from October 24, 1949 – December 9, 1949. That would put the conclusion of this story right around the sale of Batman #57 for you history buffs! It’s a very noir tale that feels like it belongs more in the 1939-era of Batman than the one in which it “saw print”. The Batman finds himself investigating a macabre series of beheadings that has ties with the GCPD and ritual killings. Aja’s hardboiled narration is on point and his art style in this recollects the works of Lee Weeks and David Mazzucchelli. If I had to pick a favorite story in this issue, this would have to be it.

Diverse storytelling once again makes Batman: Black & White a worthwhile endeavor. There’s not a single bad story in the bunch. This issue’s art may be more conventional than the prior installment, but it’s no less stunning.  The only downside for me was the cliffhanger “Dual” ended on since I don’t think we’ll get a proper conclusion. Outside of that, I loved everything about the issue and am looking forward to what’s in store next month! – Javier E. Trujillo