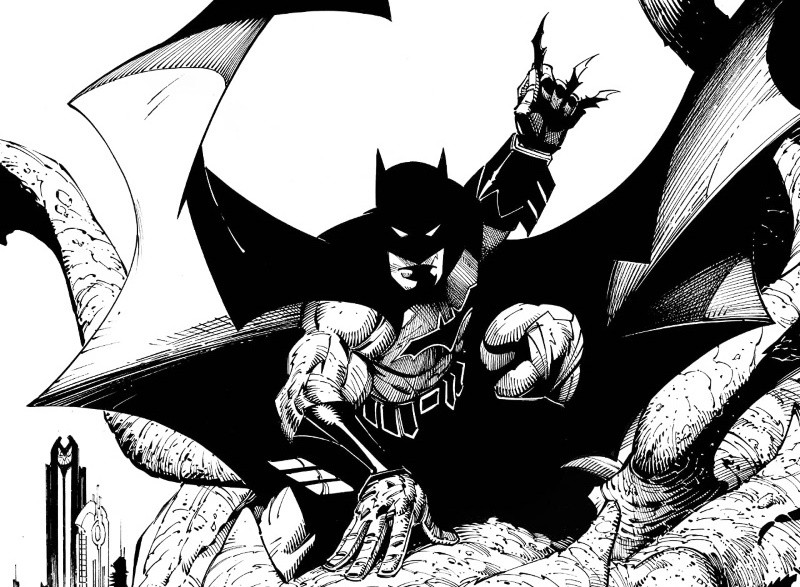 SYNOPSIS: The iconic anthology series returns with a brand-new slate of comics’ most exciting and innovative storytellers to explore the Batman mythos in stark black-and-white!

Launching in the summer of 1996, Batman: Black & White started off as a four-issue miniseries and was later resurrected as a backup story in Batman: Gotham Knights, before becoming a series of statues, figures, another miniseries, and then a mini PVC set.

Now it has returned to its roots with voices both familiar and new to the Dark Knight!

The first story out of the gate is written by current Batman scribe James Tynion IV. Partnered with Tradd Moore, they tell the tale of The Demon’s Fist, who in this instance is an unnamed individual in the League of Assassins. Tynion gets us inside his head as he goes about completing his mission for Ra’s al Ghul. You really feel the zealotry that Ra’s inspires in his followers. For Moore’s part, there is a liquid complexity to his art. It’s detailed, but there is a flow to his line, making his figures feel like they can strike in any direction. Moore’s use of perspective is fantastic and provides a strong start to the issue!

Next up is “Weight”. Written and illustrated by J.H. Williams III, this was my most anticipated story of this collection going in. I am a massive fan of his storytelling and innovative layouts! If you’ve seen his work on Batman and Detective Comics, you know what I’m talking about. It’s safe to say he didn’t disappoint me here! The second you see that woman’s smile hovering over the city, her pearls spilling down into the streets below, you know you’re in for a heartbreaking tale.

While there is heartbreak at the story’s root, that feeling leads to fear and anxiety, but not in the way you might expect from a Batman story. Utilizing his unique talents, Williams opens with a single page, spreads to four double-page layouts, before closing on a single page. During those double-page spreads, we are taken on a tour, a Greatest Hits if you will, of the Dark Knight’s illustrious 80+ year career. We see the Caped Crusader battle hideous threats, overcome nigh-insurmountable odds, but it is this current challenge that may be his most daunting and the kicker is, he’s powerless. As Ledger’s Joker says, “Nothing to do with all your strength”. Instead, Batman pays tribute to those who can stand against this crisis and stands at the ready for those foes he can fight against. It’s a story reflective of the times in which it’s told and I thank Williams for the hope he offers.

“First Flight” brings together a unique pairing-Paul Dini and Andy Kubert! While Kubert was providing pencils for Grant Morrison’s writing over on Batman, Dini was working his own magic scribing Detective Comics at the same time! The duo provides an entertaining sequel to an element of “Batman & Son”. How can you not love Ninja Man-Bats?!  Kubert, in my opinion, hasn’t done enough Batman, even though he’s done some iconic work on the character, and it looks like he had a lot of fun here, showcasing some of the more classic elements of the Bat Cave!

Emma Rios pulls double duty on “Sisyphus”, the most esoteric of these entries. It’s a story worthy of re-reading if only to better grasp the concept she is getting across. Rios takes you on a journey, one that is destined to be repeated over and over again. It is haunting, tragic, and beautiful, both in prose and art. It’s a nice juxtaposition to “First Flight”, which was far more straightforward in its narrative, allowing the Black & White format to flourish with its diversity in storytelling.

The unexpected surprise for me was “Metamorphosis”, the concluding story of this issue. G. Willow Wilson and Greg Smallwood present the most noirish tale in this anthology, which is saying something in a book that solely consists of black and white visuals. Not only is there an interesting twist, revealing character, but Smallwood’s art is superb, feeling like a blend of Steve Epting, David Mazzucchelli, with maybe some Alex Toth thrown in. I love how his Batman merges with the shadows, a dangerous silhouette for those who have done wrong. There’s something evocative of David Fincher’s Se7en to me and while this is a simple tale, I’d love to see it adapted as a scene in a future Batman movie someday.

The Batman: Black & White series has always been something special. It allows creators to play with the concept of Batman in various ways and unveil new facets to one of fiction’s most enduring characters. You only need only look at J.H. Williams III’s contribution to get an inkling of all the ways the Dark Knight has been interpreted throughout the decades. For those looking for a solid Batman fix or for those seeking something maybe more non-traditional and outside-the-box, you can do no wrong with this comic. It’s a celebration of the Caped Crusader that just may have you see him in a new light! – Javier E. Trujillo

Launching this week is vol. 5 of the revered comic series BATMAN: BLACK AND WHITE, a compilation of original short stories from popular talent in the comic book world. Included in this issue are five stories spread out over 40+ pages.

Written by current BATMAN scribe James Tynion IV and illustrated by Tradd Moore, this story follows a fight between the Dark Knight and Ra’s al Ghul and his league. At times, the art can get a little confusing but it’s still unique and action-heavy (I mean that in a positive way). Tynion’s story culminates in a cool meaning at the end, kicking off this issue in an entertaining way.

Written and illustrated by J.H. Williams III, this tale is all reflective of Batman’s past. Sprinkled in are different eras in his fights with famous villains and moments from his 80+ years. I really enjoyed the many glimpses of these Batman highlights. Also, some of these images are simply breathtaking, and a unique layout to make each page pop.

Looking at the story credits, this one had me excited the most. Paul Dini and Andy Kubert team up here to expand on a certain element Kubert has touched on before in BATMAN. This story is full of action, perfectly illustrated by the artist and enhanced by the sublime dialogue from Dini. The end is a charming capper, that makes sense and made me smile.

Unfortunately, this was the only speed bump of the issue for me. Emma Rios handles double duty here as well, and at first, pulled me in. The issue speaks poetically, and the art gets confusing, which had me scratching my head throughout. Maybe it’s one that takes multiple readings to fully comprehend? Just one was enough for me.

While there have been three good stories thus far, this one wins the issue for me. Writer G. Willow Wilson takes us into the noir world with a linear story that isn’t all that it seems. Enhanced are Greg Smallwood’s illustrations and shadows. This is great noir storytelling and a Batman that is a dash from the past, leaving me wanting more.

It’s a happy return to the BATMAN: BLACK AND WHITE world. Most stories were good, with one even being great. And with the talent for the next issue already teased, we’re likely in for a treat the next five issues. – Ryan Lower