SYNOPSIS: The mythology of Batman continues to expand in this issue of Batman Black and White as we explore alternate takes and possible futures for the Caped Crusader from the minds of comics’ most innovative and creative thinkers! 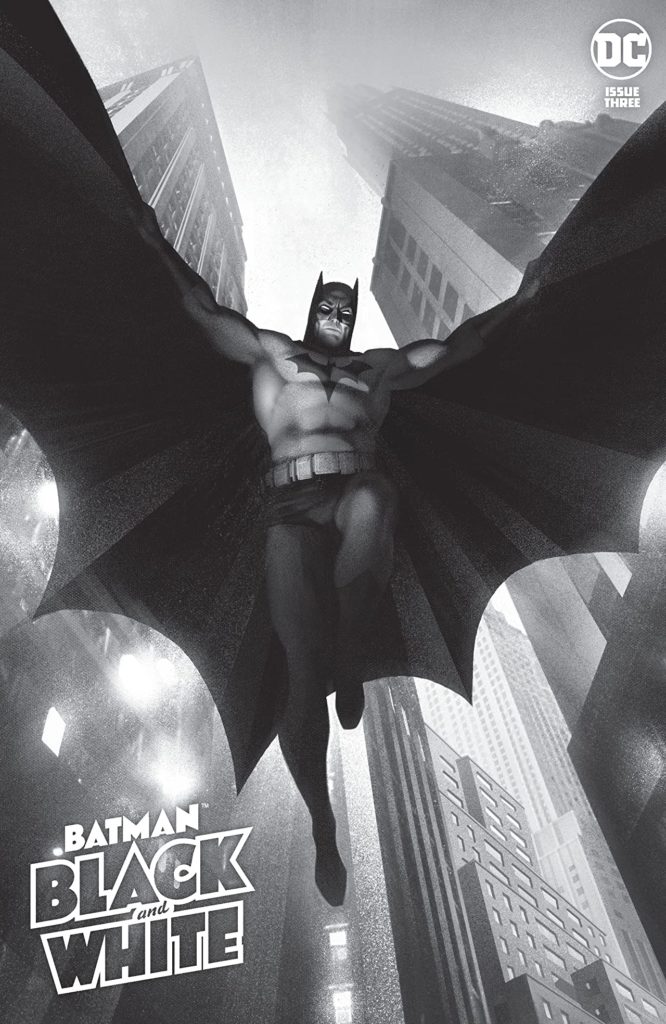 You could say John Ridley and Olivier Coipel headline this issue with their short story, “The Cavalry”. If you’ve wondered if there was a tale behind Coipel’s variant cover for The Next Batman #1, well this is it. Batman (Tim “Jace” Fox) has been captured by The Igloo Bois, a racist, anti-government group made up of Penguin’s former henchman in this world of DC’s Future State. It’s hard to not think of A Death in The Family with how Ridley chooses to open the scene. Coipel’s use of the nine-panel grid structure is effective at showcasing the trauma Batman is enduring. The titular character in this story seems to be a costumed Tiff Fox, but her nom-de-guerre is a mystery for now. She’s got a Damian Wayne League of Assassins vibe going on with her outfit, though. I love Jace’s tactical observations as he breaks down the gang to Tiff and his insistence on no guns. We don’t have a lot to go on with him at this point, but he definitely feels like The Batman here. Ridley and Coipel have proven with their second collaboration that they make a great team and I hope that continues somewhere down the road with the Fox family along for the ride.

Bilquis Evely brings her dream-like talents to “A Kingdom of Thorns”. We see Batman as a true knight in an ethereal world where he must face the dangers of a god-like being named Ivy who controls the land. Her take on Ivy is a benevolent force of nature, turned cruel by people exploiting her gifts unknowingly. Although he is in a different place and setting, Batman’s character shines through in his indomitable will to complete his task and return what was taken…even at the cost of his life. Evely’s art is very detailed in her linework and perfectly compliments the fairytale-like setting.

Bengal is the second creator doing writing and art chores this issue, with his story, “I Am The Bat”. I’m familiar with his work on Spider-Gwen for that marvelous another big publisher, and he brings that sense of high energy here. There is a tremendous sense of speed and movement as getaway cars tear through the city with Batman in hot pursuit via grapnel gun. He takes advantage of the black and white coloring well, making it unclear at first if this Batman’s suit is in the shadows or actually all black. Much like who this Batman is, all (well, almost all) becomes revealed by the conclusion. It’s a fun tale, highlighting the influence a father has on their children.

“An Unquiet Knight” has two names that should be familiar to Bat-Fans: Tim Seeley and Kelley Jones. Confession time, my fellow BOFers. Back in the ‘90s when Jones was doing the covers on the Knightfall saga and then later took over Batman, I wasn’t a fan. In fact, I foolishly stopped buying the main title when he was the artist. The Red Rain trilogy changed that for me and now I love and appreciate his work.

So, it’s fair to say this was my most anticipated entry in this issue and Jones and Seeley didn’t disappoint. I would buy a whole Batman: Black & White volume with Jones’ work. His macabre stylings pair with the stark coloring magnificently. As for Seely, he really gets you into the soul of Batman with this tale, highlighting what is most important to Bruce Wayne. And what would a supernatural tale be without the likes of Etrigan and Zatanna? For such a grounded character, I do love it when the Dark Knight crosses over with the spooky and the supernatural and Jones once again gives us a terrifying Batman. I don’t want to say any more about the story, but it’s beautifully haunting and tragic.

The last story, “Legacy”, is the outlier for me. Fantastically visualized by Nick Dragotta, who completes that hat trick of writer/artists this issue, his story is perhaps the most fantastical, yet most esoteric. In some future wasteland, Batman is a giant mech, blowing away other large, bio-mechatronic creatures. I find his visuals captivating and unique, but a Gundam-like Batman with a giant machine gun is in stark contrast to the Jace Fox version we see earlier who eschews firearms. That’s the point of this title though-to give us all these permutations and legends of Batman that otherwise wouldn’t normally see print. In that, “Legacy” is a success, but it’s not for everyone. It may not even be for me, but I can definitely see the talent in Dragotta’s pencils and it makes me curious to seek out some of his other work.

With tales spanning the past and future of the Dark Knight, Batman: Black & White #3 is heavy on the legacy aspect and the impact Batman has on future generations. There are so many eclectic art styles in this issue that readers are sure to find one that resonates with their tastes. The same goes for the writing. One or two stories may be too offbeat, but overall this continues to be an entertaining book. – Javier E. Trujillo