SYNOPSIS: Phantasm has come to Gotham City! Andrea Beaumont, the one-time love of Bruce Wayne, is looking for her lost child, and she’s pretty sure The Joker is involved. So, who better to have as an ally than Batman? And what better way to get to Batman than through Catwoman? It’s a knotted history for this costumed quartet, spanning past, present, and future. What The Joker did to Selina Kyle at the beginning of her career will have deadly consequences at the end of their lives. Tom King’s ultimate tale of the Dark Knight kicks into high gear as the story roars down the avenues only hinted at in the pages of Batman. 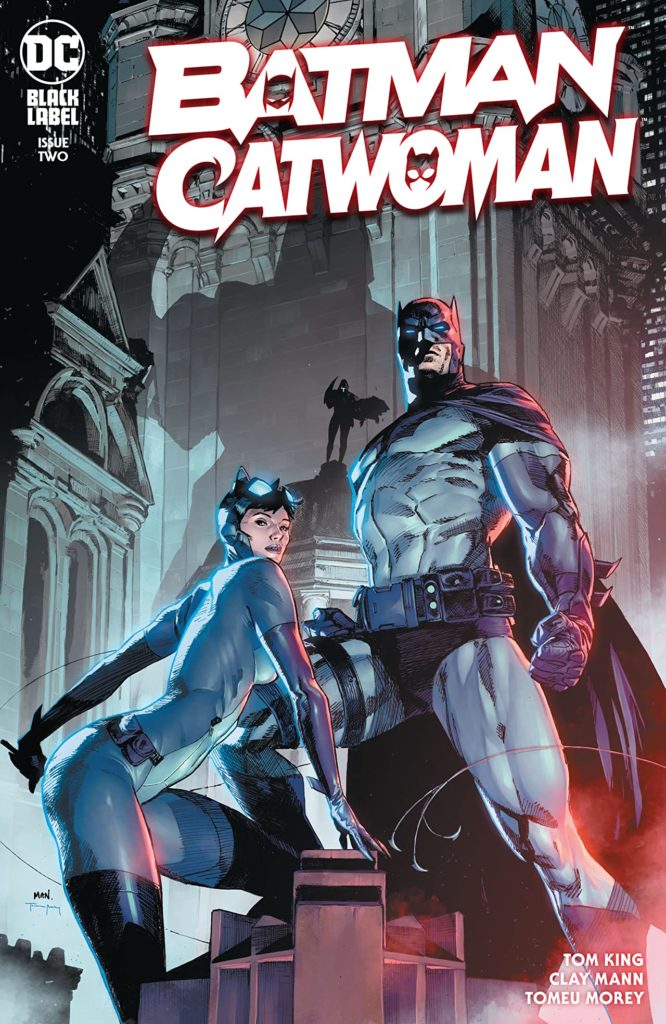 “Hey, you remember that time? Before your wedding? In the church?”

The epic story of the Bat and the Cat’s romance continues across the ages, with King rooting it in the continuity he established, even though it’s now moved to Black Label. The window box and holiday song motifs continue, with “Silent Night” being replaced by “Up on The Housetop”.

Obviously, the time-jumps are back, too, with King starting us off in the future, going back to the past, then back to the future again-all on the first page of the story! He doesn’t let up with the technique either, but thankfully Clay Mann’s art is there to clue you in to the era.

The horror vibe is strong, with the Phantasm being a lethal, stalking presence throughout the book, but the Joker has some chilling visuals, too, particularly during one of his encounters with Selina.

I felt like the Batman presence was light and we get nothing of Andrea in this issue, just her alter-ego. King drops some more teases, but those wanting some Bruce/Andrea relationship scenes are going to feel disappointed. And while we do see Bruce and Selina together, in and out of costume, the focus of the story rests on the Joker/Selina dynamic.

Here are two people inexorably tied to each other because of their relationship (love?) with the Dark Knight. They’re bound together not just because they first plagued the Caped Crusader in Batman #1, but a criminal lifestyle that keeps them in orbit of the World’s Greatest Detective. A happy life with Selina could mean an end to Batman, which would mean an end to The Joker.  Does this make Catwoman and the Clown Prince “frenemies” or adversaries with the occasional mutual interest? King dances around it in the various timelines, but seems to settle on “all of the above”. Theirs just might be the most complicated relationship in the book.

Tomeu Morey dazzles on the colors. Look at the splash page of the Phantasm, her scythe drenched in bright red blood as she emerges from the shadows, an electric blue glow in her eyes. Also, take a glance at The Joker, perched high atop a garish holiday throne. His outfit pops out amongst all the colorfully wrapped gifts below him. Joker’s “Heeeeeeeeere’s Johnny!” moment is also another highlight. Morey adds extra life to the gorgeous art of Clay Mann.

The pacing is good between the various flashbacks and flashforwards, but with ten issues to go, King is taking his time with revelations. Given that this is Black Label, I feel this issue’s violent climax could go in any direction as it isn’t bound to any continuity. King has pulled fake outs before (I waited for months for Alfred’s death at the hands of Bane to have been faked) so we’ll have to see what sticks next month.

Those looking for more Batman and Phantasm involvement may feel let down, but there is some stunning art and gripping storytelling in place as we spend some time on the Selina/Joker relationship. There are a few nods to Batman: The Animated Series, not to mention a certain catchphrase that will make aficionados very happy. So, grab a glass of water (but be careful if you want ice) and dive back into the past, present, and future of the Bat and the Cat! – Javier E. Trujillo