SYNOPSIS: The Joker has hidden a bomb in Gotham-but there might be a bigger explosion if Batman proves his suspicions true, and Catwoman actually knows where it is! It’s a dangerous secret that threatens to destroy the couple’s relationship in its early days, and it’s going to reverberate throughout their time together. In the present day, it will affect how Selina handles Andrea Beaumont, a.k.a. Phantasm, who has a vendetta to carry out against the Clown Prince of Crime, fueled by the righteous fury of a mother who lost her son.  And this whole chain of events is what ultimately leads to Catwoman killing The Joker in the future-a secret she can’t keep from her daughter, Batwoman, much longer. Particularly now that old man Penguin is involved. 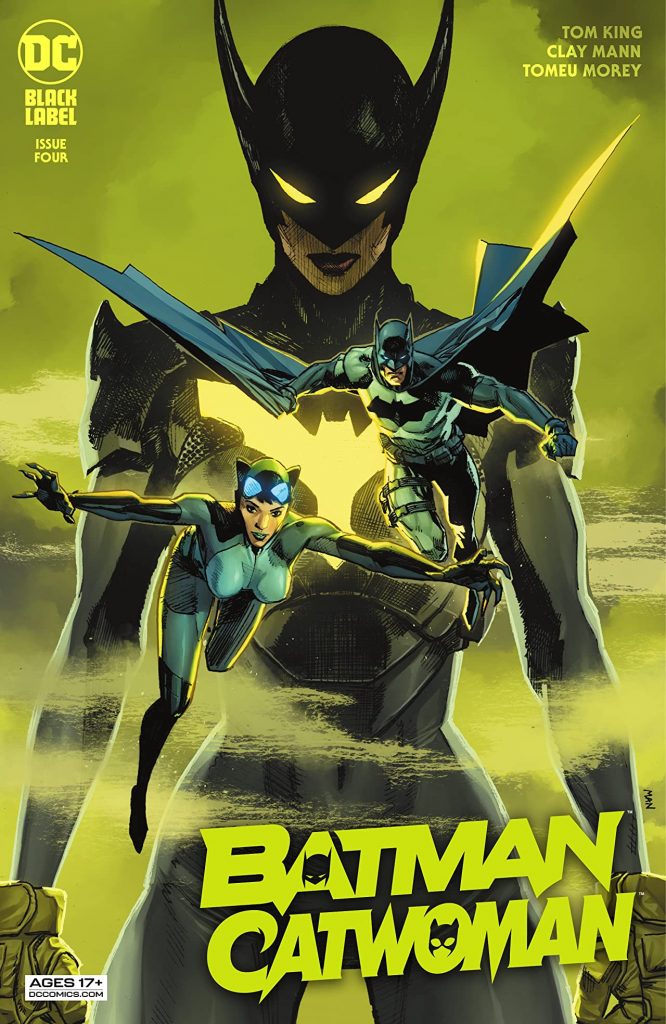 “What…Bruce…what do you want from me?”

While Spring is rearing its head for us, it’s still the winter holiday season in the Gotham of the past. Selina — in her black Catwoman garb — opens up the window box for this issue to the tune of “Hark! The Herald Angels Sing;” perhaps an allusion to her newfound glory as the queen of Gotham in the future? King segues the now-customary Bat/Cat intro into the threat Joker made during last issue’s climax-he’s going to gas a big Christmas party at the Gotham Ice Rink. Mann’s cinematic camera work highlights the danger as the story transitions to the present day of Gotham.

Morey’s coloring is magnificent as the glow of the bomb’s numbers carries over into the background of the present-day base of the Phantasm, the seemingly defunct Gotham World’s Fair. Mann lets it rip with the art, presenting a towering Phantasm who strides menacingly through a model of Gotham. It is Silver Age vibes at its best, reflecting an era where Batman would fight amongst oversized props, an aesthetic also reflected in the Phantasm’s big-screen debut. Furthermore, fans of Batman: Mask of The Phantasm will surely recognize the dialogue Phantasm is proclaiming as it is straight from one of the movie’s flashbacks. It’s one of several breadcrumbs to the film that establishes a continuity to the events that transpired within.

Jumping to the future, Batwoman is going around to the Rogues Gallery, trying to find out what sort of connection her mother had to Joker. Again, Mann’s work is a joy to behold. His Batwoman’s cowl evokes the first appearance of her father in Detective Comics. And in a move sure to please BOF Senior Contributor Peter Verra, I see a Danny Devito Batman Returns influence in his Penguin. The sorrow in Clayface’s eyes as he waxes nostalgic about the good old days is something else, too! In fact, all the older villains look amazing under his pencil. I’ll let you read it for yourself to see who makes a cameo!

It’s not just villains that look phenomenal under Mann’s pencils, animals look awesome, too! There are quite a few in this outing, but none are more purrfectly captured than Selina’s cat when it is ready to pounce! I have a cat, too, and that is the exact same wide-eyed, low posture look she gives when she is about to strike! It was a scene that cracked me up…until its horrifying conclusion.

While The Joker is absent this go-round (save for his chin on a monitor), his presence permeates the book, driving all our major characters forward. This perhaps is most felt in the relationship between Bruce and Selina. Given the knowledge Joker shares with her last issue, she is at a moral crossroads and is forced to pick a side. This comes to a head as she and Bruce get ready for a party. Bruce, as he is preparing Selina for what to expect at these types of things, seems genuinely happy. The tragedy comes when he has to change into a different kind of suit and storms off in grim determination to face his foe’s latest threat. This leads to a future confrontation at the story’s end…and a short-term victory for The Joker.

I’ll mention again how fantastic Mann is. His compositions are pure perfection and a major source of enjoyment for me. His two-page spread towards the climax heightens the emotional divide between two characters, leaving one emotionally and physically isolated at the conclusion. I’m going to need an Absolute edition fast-tracked once this title is complete!

King has not let me down yet. We are now a third of the way through the story and while it still feels light on Batman, Catwoman as the driving force is no less compelling. Given that her husband is dead in one of the time periods, she is the real star here as we see how Bruce has impacted her life. We are getting some real insights into how complex her character is and it is most welcomed.

Hands down, this is the Bat title I am most looking forward to reading month in and month out. King makes it feel epic and intimate at the same time. Featuring complex characterizations, dynamic art, and vibrant coloring make this book an absolute must and something I eagerly await! – Javier E. Trujillo

The post BATMAN/CATWOMAN #4 Review appeared first on BATMAN ON FILM.