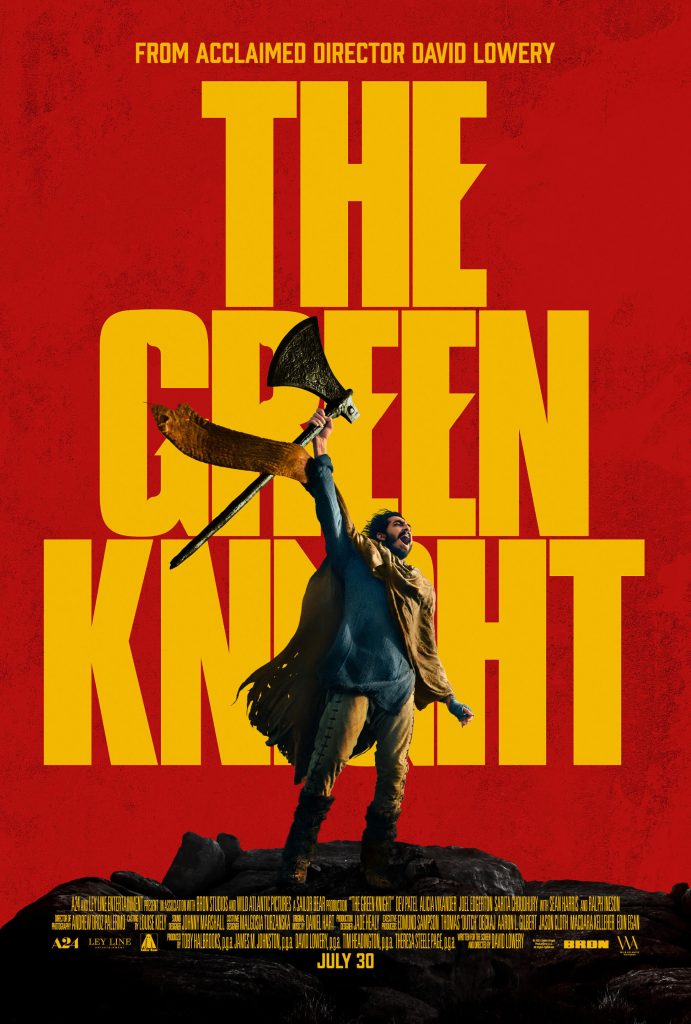 The Green Knight is a visual work of art for director David Lowery and a tour-de-force for actor Dev Patel. But with its dream-like presentation, the pace is slow and a bit frustrating. That said, it’s good to know that going in because the pace actually fits in with the theme of contrasts that dominates the film. The Green Knight alternates extended lyrical scenes with incidents of intense action, reflecting the personality of the protagonist.

Based somewhat loosely on the medieval poem Sir Gawain and the Green Knight, the script includes many aspects of the Arthurian legend but deviates dramatically from the ending. If you’re not familiar with it, it probably won’t matter to you. I would have preferred the poem’s version because it features many of the more familiar characters from the tales of King Arthur, but apparently Lowery wanted to limit the scope of the narrative.

Dev Patel offers a masterful performance as Gawain. Before Gawain sets out on his quest, he’s an immature, fun-seeking lad who takes full advantage of his position as the King’s nephew. He spends his time drinking in the local tavern or with his lover Essel played by Alicia Vikander sporting an inexplicable short, boy’s haircut. Vikander, in a dual role, returns later in the story as the Lady of the Castle to Joel Edgerton’s Lord. Gawain is unable to fulfill Essel’s request to make her his Lady. Commitment isn’t his thing in the beginning; indecision is. Like all the characters in this film, he alternates between sympathetic and unsympathetic.

Gawain’s mother, played by Sarita Choudhury, is sister to King (Arthur) and a sorceress. The King is portrayed by Sean Harris with a world-weary melancholy. He’s never called Arthur, but you easily infer that he is, along with his Queen (Guinivere), played by Kate Dickie. None of the Camelot drama between them is a factor in the film.

At the Christmas Day feast, a non-human tree-like knight (Ralph Ineson) rides his horse into the castle and offers a challenge. Who among the knights will duel with him and cut him? In return, that knight must go to his Green Chapel one year hence and receive the same cut. The King suggests that it is a game and he would accept the challenge if he were able. Gawain, suddenly seized by the desire to prove himself, volunteers. He foolishly cuts off the Green Knight’s head, apparently unaware he’s just determined his own fate.

A year later, as he rides off on his journey, his mother gives him an enchanted belt that will protect him from harm as long as he wears it. If you know anything about knightly quests, you know that the journey must be filled with great difficulties and at least one heroic deed that must be accomplished with honor. Gawain, in his naiveté, trusts the wrong people, is beset by thieves leaving him with only the clothes on his back, misinterprets a spirit animal (a fox) that may or may not be an omen, and at last, he helps a spectral noblewoman, Winifred (Erin Kellyman), in a perilous challenge, thereby fulfilling his heroic duty.

He endures bone-chilling weather and hunger before arriving at a castle and desperately knocks on the door, collapsing when the Lord (Edgerton) and Lady (Vikander) let him in. Again, they may or may not be whom they appear to be. Gawain isn’t very good at recognizing signs and omens. In his time with them, The Lady offers herself to him, but he refuses because it would be a grave sin. What follows can only be described as a messy encounter.

His final confrontation with the Green Knight must be left for you to find out, but it does include a lengthy vision that sets Gawain on the course to at last achieve honor. Successful or not, the final encounter is his fate.

Although it’s really Patel’s film, all of the performances are excellent. Accordingly, David Lowery creates a fantastical and mysterious world for his characters. He filmed entirely in County Tipperary, Ireland, including Cahir Castle. It feels authentically early medieval with its primitive furnishings, mud-filled streets, and bare stone walls. Clothing is not the lavish, courtly kind often shown in such films, but rather simpler finery more appropriate for the time.

As Gawain travels through the land, Lowery gives the audience its own mystical journey. Mist-filled forests, cloud-enshrouded mountains, ghostly fairy lights, gnarled tree limbs, and cascading waterfalls. Anything seems possible in such places. Visually, the film is stunning.

If you are a fan of the Arthurian legends at all, The Green Knight is worthy of your time. If you agree with me, you’ll long for the actual ending of lore. As it stands, the film’s ending is ambiguous. 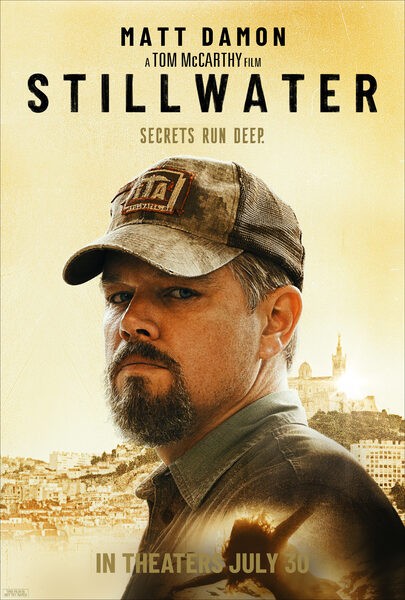 Stillwater, director Tom McCarthy’s new film starring Matt Damon, received a standing ovation at the Cannes Film Festival. I can certainly see why – it is excellent. However, it is being heavily marketed as a thriller. Even Matt Damon has spoken out about this. It is not a thriller. Certainly, it has tense moments, but they arise from the narrative and the character’s motivations. As Damon said, don’t expect a Liam Neeson-style hero charging in with guns blazing. The strength of the film is its authenticity. The characters are real, and whether or not you agree with them, you can identify with them.

Damon plays Bill Baker, an Oklahoma oil rig worker, whose daughter Allison (Abigail Breslin) is in prison in Marseilles, France for a murder she claims she didn’t do. At the film’s beginning, she’s already been incarcerated for 5 years. Her dad has been working tirelessly to find a way to prove her innocence.

His own situation is far from ideal. He’s working clean-up at the scene of a tornado because roughneck jobs and the oil industry, in general, have suffered a downturn. He’s a high-school dropout and a substance abuser in recovery. He wasn’t around much when Allison was growing up. Her mother committed suicide, so her maternal grandmother, Sharon (Deanna Dunagan), mostly raised her. Sharon’s relationship with Bill is tolerant but tense.

Bill is driven by regret, and his sole purpose is to be there for Allison to make up for his neglect when he was, as he says, a “f..k up”. He’s been traveling to Marseilles regularly to visit her and confer with her lawyer. Of course, he stands out among the French. Damon’s characterization never wavers. He is consistent with the Oklahoma accent and mannerisms. It’s always ma’am and sir, and he says grace before every meal, even a Subway sandwich in his hotel room.

This time, Allison gives him a letter written in French that she says has new information about her case — in particular, a suspect. He takes it to the lawyer who rejects the information, so he decides to take on an investigation of his own. Not speaking French, he needs an ally to help out. He finds one in a woman, Virginie (Camille Cottin), a struggling actress. He bonds with her young daughter, Maya (Lilou Siauvand), and sees an opportunity to help them and perhaps find some redemption for neglecting his own daughter.

Faced with the disinterest of the legal system, he decides to stay, gets a construction job, rents a room from Virginie, and begins his search. He’s looking for an individual of interest named Akim (Idir Azougli) who’s been scene at a party by one of Allison’s friends. The police know about him but haven’t been able to find him. Allison tells her dad that Akim did it and she could prove it if Bill can find him.

Bill’s search takes him to the Arab slums of Marseilles where the ugly face of French racism becomes painfully apparent. All the while, he and Virginie are becoming closer, and his role as a substitute father to Maya becomes all-important to him. His investigations put him in direct conflict with the police and ultimately, with both Allison and Virginie. It’s easy to see that his search could produce some unexpected outcomes, both good and bad. Will things backfire for him? I’ll leave that to you to find out.

The outcome may not be what you expect. Through his journey, both personal and actual, Bill learns some uncomfortable truths even though he experiences some temporary happiness with Virginie and Maya. Both Bill and Allison are looking for a second chance, but just as in real life, those are rare and often not what you expect.

Stillwater is a satisfying, character-driven drama. Ultimately, it’s about regret, redemption, and also ambiguity. It rings true because most answers in anyone’s life are not clear-cut. Ambiguity often seems like the norm. – Joanne Hyde