SYNOPSIS: In this second Future State: Batman chapter, wearing a mask in Gotham City is now a crime-and when it’s compounded with murder, it can be a shoot-on-sight offense! Batman is on the trail of a murderous couple but quickly finds that all is not as it seems…and finds himself in the firing line of the Magistrate and their Peacekeepers! The gritty, street-level adventures of the new Dark Knight continue! 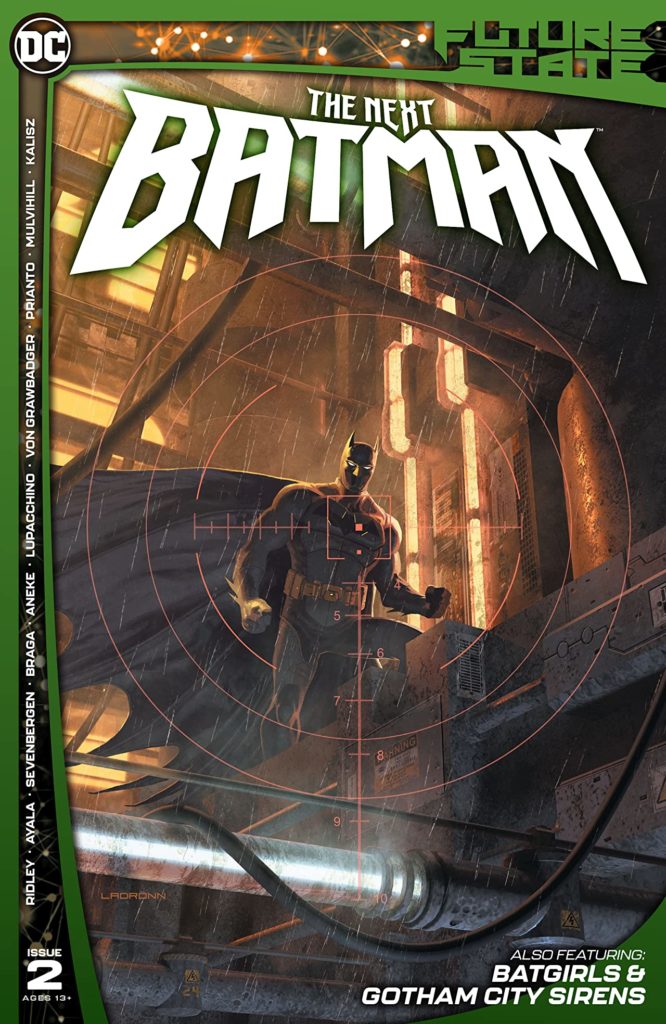 FUTURE STATE is moving right along, and with it comes the next chapter in, well, THE NEXT BATMAN storyline.

While not specifically revealed the last issue, we do get a glimpse of the man behind the cowl; Tim (Jace) Fox, the brother to Luke Fox. We still don’t know the why or how he became the next Dark Knight, but now we know he is.

Gotham remains Gotham, in a way. Full of murder and crime, but the powerful police effort, the Magistrate, continue going hard after masked citizens. They’ve even deployed their own foot soldiers, who interact with Batman throughout this issue. Meanwhile, this Caped Crusader is busy hunting down murderers and slowly peeling back the layers to the big picture.

This issue had a little bit more of a story and hook going on than the last. We’re seeing this Batman in action; trying to solve a murder, tracking down the suspects, avoiding the police. John Ridley keeps the pacing up and we move right along.

While the story has more, and we’re getting invested, I’m still not sold on this Batman. There’s not much personality behind Fox and instead just seeing him suited up. Maybe that’s all we really need since we bought the book for Batman. For that, Ridley is delivering, but I’m not getting much reason to continue this story with the series that was announced to kick off in February.

The art takes a step back from the last issue, with Laura Braga taking over for Nick Derington. Her art definitely isn’t bad, but it seems just a little more generic than what we were introduced to in the previous issue. Personal preference? Maybe. But I was floored by Derington’s work and didn’t have much reaction to Braga’s.

Overall, I’d say THE NEXT BATMAN #2 delivers a little more substance here. We have a direction, a few more characters, and a few more layers introduced to give us a hint of where we’re headed. Can’t say I’m fully invested, but I’ll continue to follow this Batsignal. – Ryan Lower