SYNOPSIS: Kirk Langstrom’s mental state has been deteriorating for years, but in the wake of his violent altercation with the Suicide Squad, he’s found himself on the verge of a complete emotional collapse. Luckily (or unluckily) for Kirk, Dr. Harleen Quinzel is offering pro bono-and entirely unsolicited-psychological counseling. As Harley delves deep into his damaged mind, she uncovers tragic events that set the stage for his transformation into Man-Bat in the first place. Will her psychotic brand of psychology help Kirk make peace with his inner demons or leave his mind even more fractured than it was? 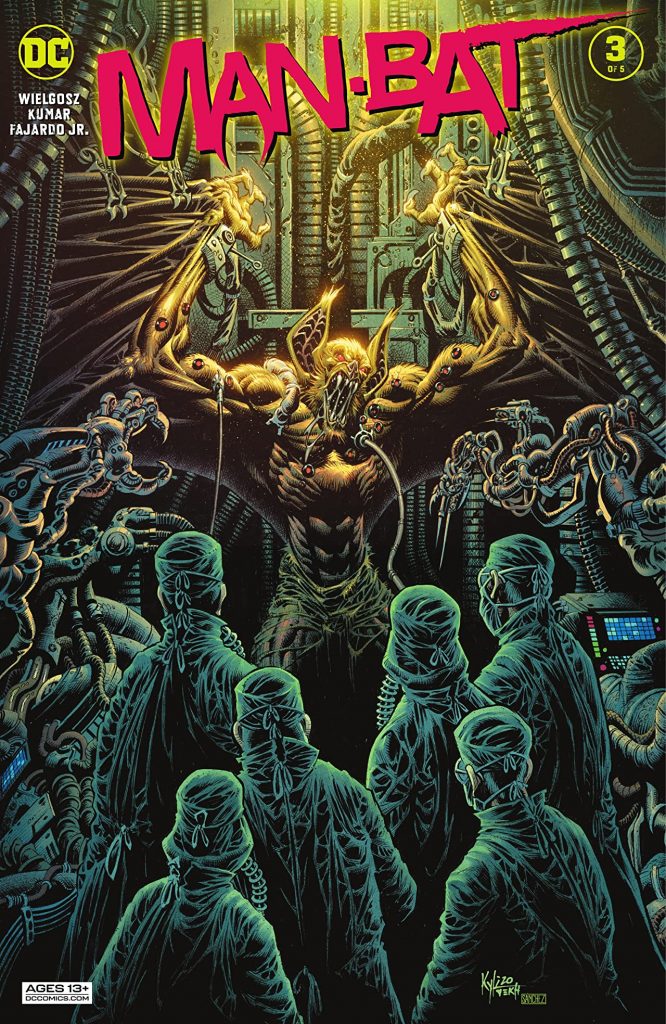 We are right in the middle of this Man-Bat mini-series, and writer Dave Wielgosz has led the reader on quite the journey on leather wings.  Each issue of the story has its tone, making them unique entries.  Issue one is that classic superhero story setting the table; issue two is an all-out action-packed assault thanks to the Suicide Squad. Issue three bleeds from multiple hearts from the first page to the last. Wielgosz gives this tale the emotional depth needed at the perfect point of the run.

Wielgosz delivers the heaviest issue, providing the reader with three moments full of heart and personal conflict.  Harley Quinn steals the book early on. After capturing Langstrom, she opens up and confronts Langstrom giving him a second chance.  Wielgosz’s Harley is right up there with the new direction the character has taken in such titles as White Knight Presents Harley Quinn by Sean Murphy and Katana Collins and Future State Harley Quinn and Harley Quinn vol. 4 by Stephanie Phillips.  I like to call this the Ph.D. Harley.  In this scene, Harley doesn’t sugarcoat things while showing off her compassionate side. A side of Harley that we do not usually see outside of scenes with Ivy.  Harley’s quick therapy session is a good play on taking a chance on someone, but also, it’s a scene that only she can make humorous.  Harley also seems to be highly self-aware of her importance in the DCU, knowing that even Waller’s threats are empty to her.

Wielgosz does a great job moving the story forward.  We now see what Scarecrow’s stake in this story is and how he is going to use Francine Langstrom to not only achieve his goal but get revenge on Man-Bat.  Here is where Wielgosz delivers the second emotional moment of the book.  Scarecrow is up to his old tricks when it comes to getting his way.  Well,  Francine is not a victim; she fights back against Scarecrow and his fear toxin.  You get a sense of her strength and determination as she fights.  It is a very Barbara Gordon moment, giving off vibes of Batgirl vol 5 #47.  It is a short and sweet scene, but it does a beautiful job characterizing both Francine Langstrom and the Scarecrow.

The third and most relatable moment in this book is when Langstrom confronts his sister.  You get a sense that Lisa already knows this will end badly with her brother.  You see them lean on the foundation of their childhood relationship to make things right.  You feel the positivity only for it to crumble right before your eyes.  Lisa knows Kirk better than anyone, maybe even Francine, and Kirk cannot get out of his way.  Moments like this in a comic book show how powerful the medium can be.  In only three issues, this has to be the most relatable version of Man-Bat ever on paper. For every effort Kirk Langstrom has put into helping people, it always seems to backfire.

Sumit Kumar once again is our interior artist on the book.  Kumar had a blast last issue drawing all that crazy action.  This month’s tale was not action-heavy and much more of an emotionally driven story.  Kumar was up to the task; he nailed the three emotional moments.  The Harley couch scene has horror elements as Harley described to Langstrom what his possible fate would be.  Langstrom on the run, being chased by men in hazmat suits, eventually strapped down to an operating table. Kumar uses panel placement to his advantage to set the scene, going back and forth between real-time and what could be.  The scene starts hilariously, then goes horror quickly before ending this empathy-filled conversation between the two characters.  Kumar has one panel where the shadows are absorbing Langstroms face, and he looks so downright disappointed in himself.  It almost as moving as the panel where Harley unties Langstrom giving him his second chance.

In the Francine/Scarecrow scene, you get the much-needed details in Francine’s face as she goes into fight or flight mode.  With some great finishing touches on Scarecrow when his fear toxic kicks in, giving off the appearance of a jack-o-lantern.  Kumar’s Scarecrow has that vintage look to him and nothing like Jorge Jiménez’s design for his run on Batman.

The moments with Langstrom and his sister are the best in the book.  Kumar works so well with Wielgosz on this part of the story.  Both of them sell every panel.  Moments such as when Lisa sees Langstrom on her front porch, you don’t even need to read; the emotion is perfectly displayed.  The moments of happiness will resonate with most, as will the big argument.  We have all been there with our siblings numerous times.   This book captures these emotional beats so well on both ends.

Wielgosz just may have crafted what might be one of the finest Man-Bat storylines ever—touching on all comic book medium layers in only three issues.  Only one question remains,  can this arc finish strong.  We have never been this deep in the mind of Kirk Langstrom. His failures towards those he loves the most we are experiencing as they happen.  We see his regrets and his attempts to correct them, only to blow up in his face. If you thought Langstrom was in a pickle after issue two, then wait until you get to the end of issue three.  The tease at the end of this book is straight out of  WandaVision. That is how you end a book!  Make sure you add this one to your comic shop pull list. It is easily one of DC’s best monthly books right now! – Peter Verra