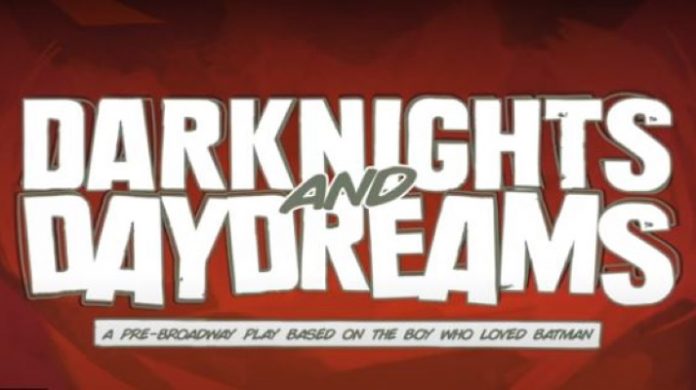 If you’re a longtime reader of this website, you know that Michael Uslan — the Originator and Executive Producer of the BATMAN movie franchise — has been a great friend to BOF over many years.  Mr. Uslan has done numerous interviews with BOF over the years, as well as contribute to the site every once in a while.  It’s been an honor to be able to call him a friend — not to just BOF, but to me as a fellow Batman fan.

So with great pleasure, I’m sharing the news that Mr. Uslan’s wonderful memoir, THE BOY WHO LOVED BATMAN, is being adapted as a Broadway production called DARKNIGHTS AND DAYDREAMS!  Details are found below after the video. – Bill “Jett” Ramey

With Broadway’s long-anticipated re-emergence just around the corner, Bob Nederlander Jr. and Nederlander Worldwide Productions, LLC announced today their plan to bring Darknights and Daydreams (working title), a new play adapted by Michael Uslan from his inspiring memoir, The Boy Who Loved Batman, to Broadway during the 2022 / 2023 season. Michael Uslan, the Originator and Executive Producer of the Batman movie franchise, brings his play to life on stage. By-invitation-only development readings are planned for June 29 and 30 in New York.

Fan-owned entertainment studio Legion M will make its first foray into Broadway, as Associate Producer, with Darknights and Daydreams. Legion M will draw on their unique fan-owned business model and community to invite fans and supporters to participate in behind-the-scenes, exclusive, once-in-a-lifetime opportunities via the Darknights and Daydreams Indiegogo page. Perks will include copies of the trade paperback The Boy Who Loved Batman, from which the play is adapted, unique signed memorabilia, access to virtual and live table readings during the development process, and many more.

Darknights and Daydreams tells the story of a boy who fought for his dreams to come true. Michael, a self-described comic book fanboy from a blue-collar New Jersey family, did not dream of being a superhero, but of saving his superhero. A lifelong Batman fan who amassed a collection of 30,000 comic books by the time he was in high school, Michael viewed the 1960s TV series as a kitschy mockery of the “dark… serious… human” version of Batman; a version that had been personally described to 14-year-old Michael by Batman’s co-creator, Bill Finger, at the 1965 ComiCon. From that moment on, Michael was determined to restore that darkness to The Batman. He held tightly onto this dream when, against all odds, he pitched and convinced Hollywood to make the first Batman film, which then took ten long years to be produced. The wild success of that film proved what Michael knew all along – the world needs superheroes, both on-screen and in real life. That first Batman movie ignited an Oscar-winning, record-shattering global pop culture phenomenon that thrives today, decades later. Michael’s passion unlocked his own superpowers and he shares his “secret origin” in this Broadway show.

“Broadway has always been a magical place where audiences flock to be inspired by stories of dreamers and underdogs who triumph over the odds,” says Michael Uslan. “I saw my first Broadway show when I was 10 years old. I fell in love with the theatre that night and can’t believe that I get to bring my story to Broadway. The play is not about Batman, not about Batman movies, and it’s not about me. No, it’s about finding joy and passion in life. This show is for people who feel lost – whether because of COVID, work, human relationships or the lack thereof. Darknights and Daydreams tells a story of burning with a passion, dreaming big, painful perseverance, getting up off the damn couch, knocking on doors till your knuckles bleed, overcoming obstacles, and then changing the world culture’s perception of comic books and super-heroes.”

“Hearing Michael Uslan tell his story in person is a rare privilege and we cannot wait to share it with Broadway audiences,” says Bob Nederlander, Jr. President and CEO, Nederlander Worldwide Productions, LLC. “His play can inspire us to channel our inner super-hero and empower us to pursue our dreams.”

Added Legion M Co-Founder and CEO Paul Scanlan, “We have been incredibly excited about this project since we first read Michael Uslan’s amazing memoir and we cannot wait to bring this story to audiences in-person around the country. This marks the first time that Legion M has been involved in a Broadway production and we can’t think of a better, more perfect script with which to kick off this exciting new chapter of the company.”