SYNOPSIS: The Joker is dead, Bruce Wayne is behind bars…and Gotham City is just starting to redefine itself without Batman.

As Harley Quinn struggles to adjust to her new life as the mother of Jack Napier’s twins, an elusive mastermind called the Producer seizes the moment to assemble a crew of villains-starting with the Starlet, a serial killer who murders Gotham’s golden age film stars in homage to their silver screen roles.

When a recent, gruesome crime scene suggests a connection to The Joker, the GTO, and FBI agent Hector Quimby turn to Harley as the one person with information that could crack the case. With some help from Bruce, Harley agrees to investigate-but to protect her children and her city from a fatal final act, Harley must flirt with madness and confront her own past. 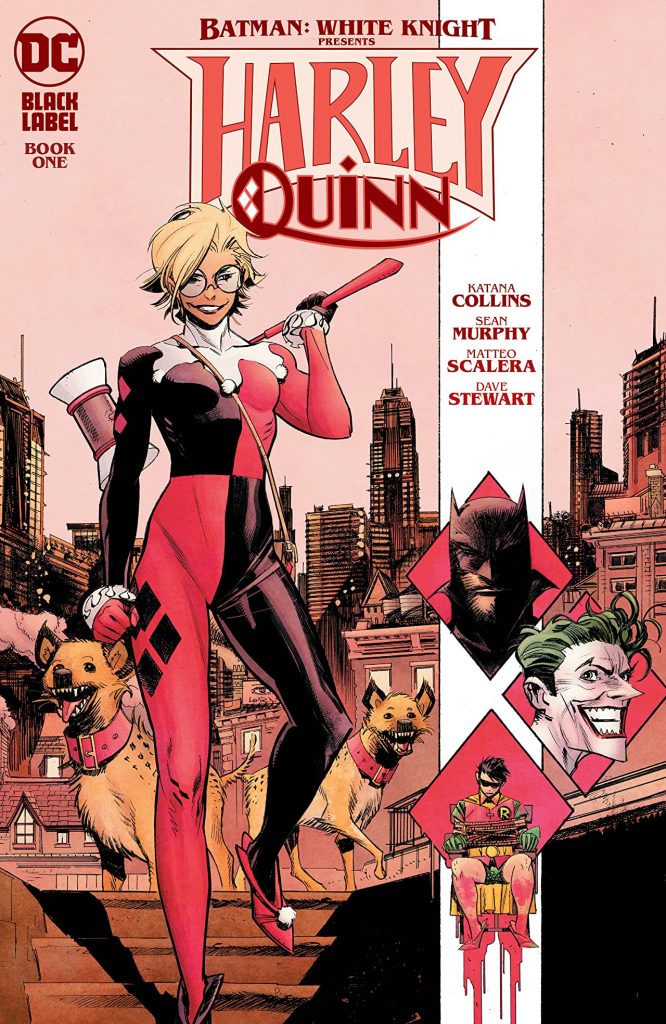 Welcome back to the world of Sean Murphy’s WHITE KNIGHT. While the writer/artist isn’t pulling double-duty this time around, we have the next best talent: his wife, Katana Collins. And the transition is flawless.

Though Murphy isn’t fully absent (he split story duties), this does seem like his next chapter of this Batman universe. Collins quickly catches us up with Harley, a single parent of two kids and two babies (hyenas). A spike in curious murders, and a visit from Duke Thomas, brings the widow out of her reflective state. also provides us an awesome (and touching) flashback sequence that gives us another glimpse of The Bat.

Speaking of reflective, we get an exciting (and touching) flashback sequence that’s highlighted by our Dark knight. In the present, his alter ego is still behind bars and gets a frequent visitor: Harley. Collins updates us with their relationship, which teeters on a close friend/secret romance that will be interesting to follow and see where it ends up. Also, though it’s her title, Bruce has to play into the story in a big way….right?

Matteo Scalera has been handed the keys (or brush?) to the castle. Like with Collins, the transition of talent is seamless. Looking at each panel, this book fits right into everything we’ve seen before but stands out just enough to be its own thing.

The return to the WHITE KNIGHT universe makes me forget I ever left it. Like its predecessors, HARLEY QUINN has hooked me with an interesting story, fantastic art, and a charismatic lead with Harley Quinn.

SYNOPSIS: In the aftermath of “The Joker War,” Selina Kyle has taken up residence in Alleytown. But when she finds that her old stomping grounds have been taken over by drug-running mobsters, she hatches a plan to take the town back! However, unbeknownst to her, she is being tracked by a terrifying new foe: a hitman in priest’s clothing known only as Father Valley, who carries a bag of bibles around as trophies from each of his victims. Will she be able to loosen the mafia’s stranglehold on her, new hometown or become another victim to Father Valley’s sacred oath? 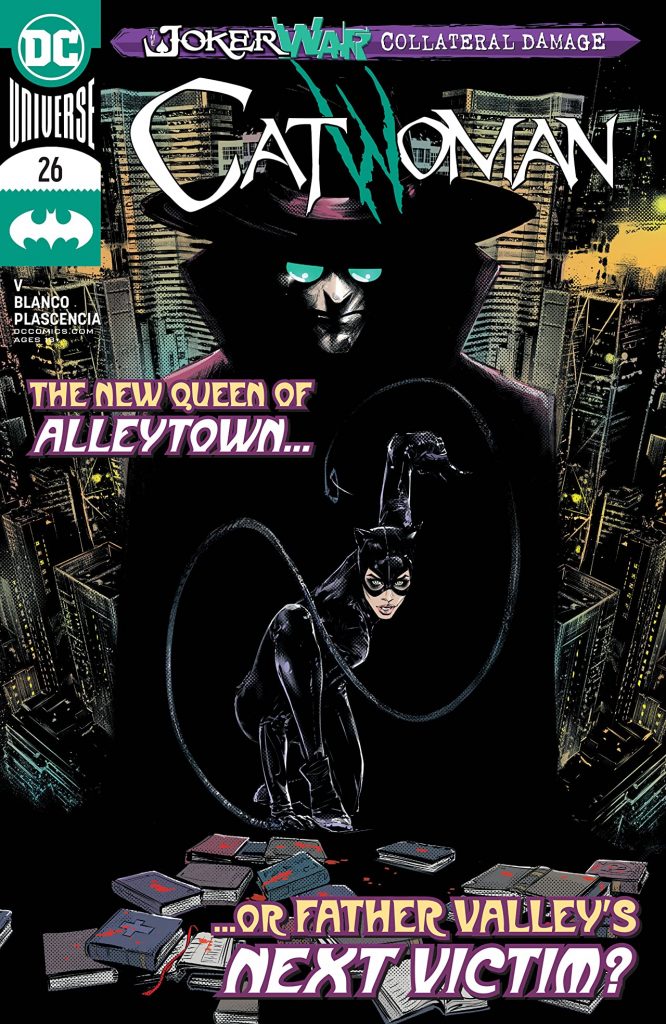 Since she’s been gone from Alleytown, some heavy-hitting criminals have staked their claim on the area and have grown some deep roots.  Selina’s fur is up, and she’s going to have to shake things up in a major way if she wants to reinstate herself as the Queen of Alleytown once more.

But while Selina is executing her plan to reclaim the throne, Oswald Cobblepot is planning Catwoman’s imminent execution.  He’s hired a scripture-quoting assassin who calls himself Father Valley to do the deed.  Rumor has it that Father Valley is quite capable in his profession, and with each town he visits, he leaves a trail of bodies in his wake…

Finally!  Selina has triumphantly returned to Gotham City.  Catwoman #25 was the perfect tease to set us up for writer Ram V’s new story arc – Selina is unpacked, and now it’s time to clean house.  And Ram V is taking Catwoman right back to where she thrives – a straight-up crime story, told out of chronological order so there’s some mystery and intrigue to keep you guessing along the way.  We get mob bosses, drugs, assassins, and claw-scratching fights – everything a good Catwoman story should have.

And he’s setting up a few new characters that could wind up being interesting – Father Valley being the epicenter – so I hope that he continues to round these characters out a bit and give us something solid over the coming months.  I’d love to see Father Valley become so compelling that he becomes a staple in the comics moving forward.  Perhaps that’s wishful thinking, but we’ll see what happens!

Fernando Blanco is back on art for this issue.  While I’ve never been blown away by his work – the characters and scenes always feel a bit flat for my tastes –he gets the job done.  Colors by FCO Plascencia help liven up the proceedings bit.  The book isn’t bad to look at, but I have to say I’m left wanting here.

If you’ve been away from Catwoman and are looking to get back into Selina’s story, this is definitely the issue to climb aboard.  A fresh new story arc, a few new characters – I’m hopeful that we’ll get some decent entertainment out of this one as it unfolds. – John Funderburg

SYNOPSIS: The Red Hood’s plan against the Bat-Family comes to a head as he offers Batman a choice: kill the Joker or Robin dies! 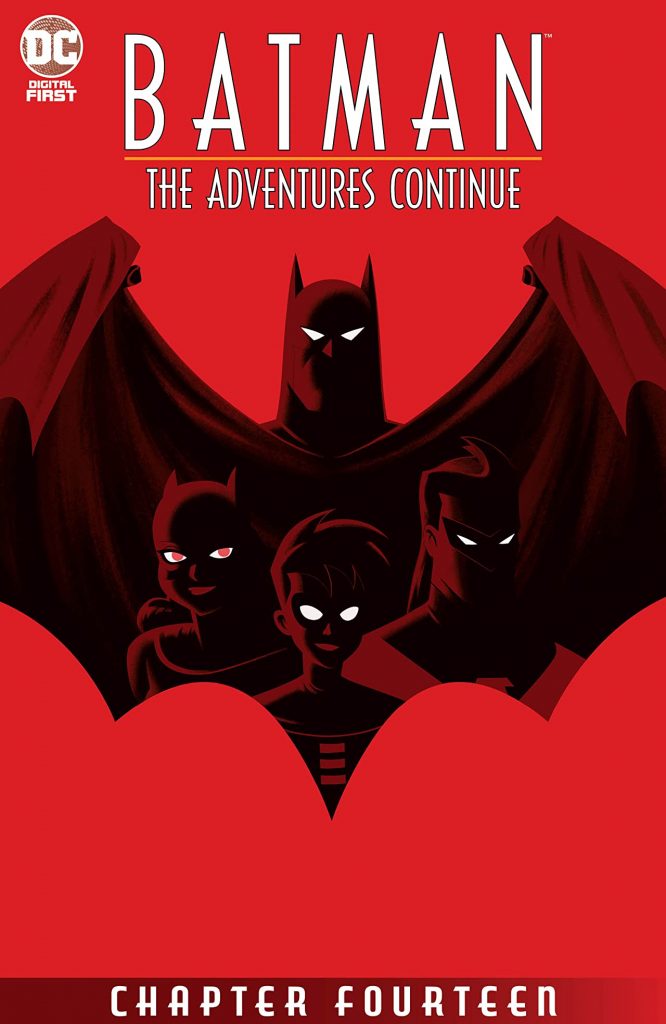 Well, it’s October, the month of Pumpkin Spice lattes and horror movie marathons, so it’s no small surprise that the opening of this issue, with Batman awakening to find the Joker handcuffed to a pipe and Robin in a death trap, had me thinking of the movie Saw.

Don’t fear, though. While blood is definitely spilled, this comic, based on the beloved animated series, doesn’t fall into the depravity of the aforementioned horror franchise. Instead, we are treated to a warped do-over, with Red Hood giving the Batman an opportunity to correct what Jason feels was a mistake. He thinks he’s got it all planned out…

However, Jason is no master planner. Even with lives at stake, both Batman and Joker won’t play ball. You have to feel bad for the guy — not only does he feel betrayed and left for dead, but now he’s getting trolled by his would-be-murderer and his father figure. While Dini and Burnett have woven a story with numerous callbacks and set-ups that pay off later, Red Hood is nowhere near their level, with his world literally falling down around him.

As with the prior thirteen chapters, Templeton and Kubina are the perfect team; effortlessly marrying image and color. I love the various expressions they bestow upon Joker-irritation, murderous glee, and shock. As always, the Clown Prince is the most diverse when it comes to showing off what he’s thinking, compared to Batman, who is as stoically heroic as always. This series couldn’t have had a better team to bring it to life, making each panel feel like a still from an unreleased episode.

Burnett and Dini accomplished the impossible with this series-fitting in Jason Todd as the Red Hood/Robin and having it all make sense. It was a daunting task given how much the animated Tim had in common with Jason, but the writing made it feel original, yet true to the spirit of the character. It’s also very timely, given its proximity to the release of the comic series Three Jokers and the animated choose-your-own-adventure movie Batman: Death in The Family. Red Hood is definitely getting his time in the spotlight, proving there is a lot of life left in Jason Todd.

While the last panel may close with a “The End” caption, there’s definitely somewhere for the story to go, should this series prove successful enough. It’s easy to write this story off as something for kids, but there was some rich character work done and I’d be very interested in seeing that continue in another limited series. For now, this was an authentic return to the world that began in Batman: The Animated Series, one that can hold its cowl high knowing it did justice to all that’s come before while adding new shades to the legend that is The Dark Knight. – Javier E. Trujillo

SYNOPSIS: In the wake of “The Joker War,” Nightwing is back-but is he back for good? And does he remember Bea? With the help of Batman, Batgirl, his Teen Titans friends, and even Alfred, Nightwing must decide for himself which path to take. Then, when KGBeast discovers Nightwing is still alive, his street credibility is on the line if he doesn’t go to finish the job he started when he tried to kill Nightwing…and missed! Nightwing better watch his back is he wants to be back for good! 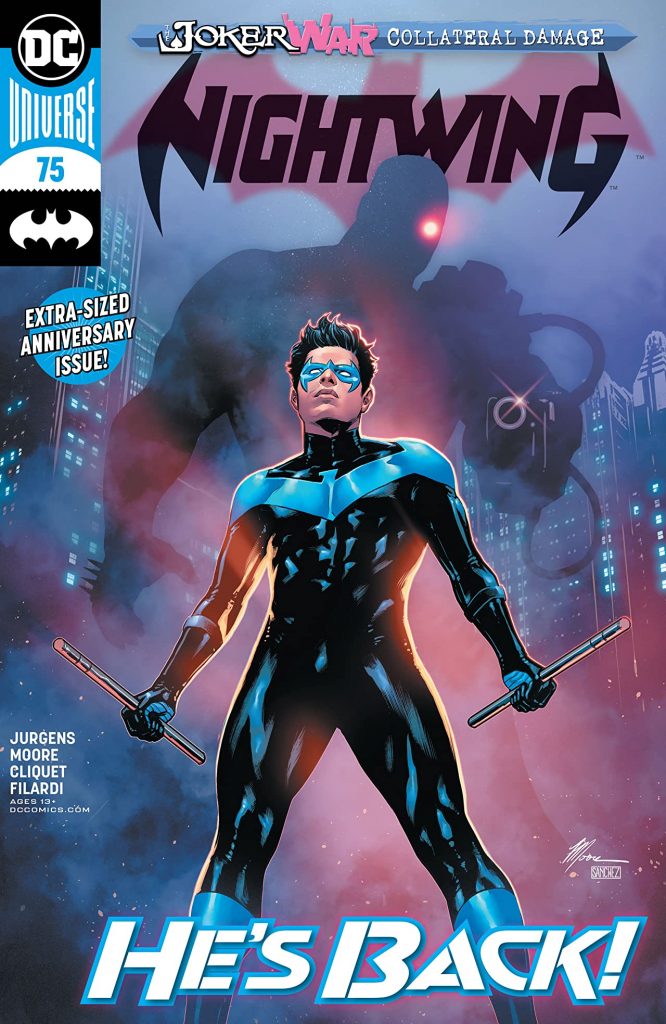 Nightwing is back but Dick Grayson is still conflicted.

We begin NIGHTWING #75 with two friends from Grayson’s Teen Titans days showing up to congratulate him for getting his memory back.

Grayson later dons his current red & silver Nightwing costume (bleh!) to mop up some goons separately with Batgirl and Batman (who both refreshingly make a crack about that Nightwing suit!) and handles some unfinished business with Team Nightwing. We even see Batman smile!

All the while KG Beast, who’s still remarkably alive after BATMAN #57, decides to return and take another shot at Grayson…

I appreciate that Grayson’s recovery is not as clear cut as it played out in NIGHTWING #74. When his memories returned and the Bat-Family welcomed him back it felt a little too … convenient and reboot-like. As someone who liked the Ric Grayson storyline for turning things upside down, I wanted it to have some long-lasting consequence.

During the conversations with the Titans, Batgirl and Batman the prevailing opinion is that all is back to normal and Grayson can just go back to the way things were. At first, Grayson is good-humored about it but gradually resents that idea, makes a confession about his time as Ric, and dares to think that he could have something Batman never could: a somewhat normal life.

On a trivial note, I’m glad there was no “My name is…” intro. That popped up a lot during the Ric storyline and while it served a purpose to remind readers of the name change it felt a little too CW show format for me.

NIGHTWING #75 builds on the conflict Grayson has had between coming to people’s aid as a hero or being happy with someone he loves. Check out that, and more, at your local comic book shop! – James Armstrong