SYNOPSIS: Thanks to some magical help from Zatanna, Batman can now see Deadman. Joining forces, the Dark Knight and the death-defying specter hatch a plan to apprehend the treacherous Talon. But the mysterious assassin gets the upper hand and captures Hamilton Hill Jr.! Can Batman and Deadman track the regeneration formula components and find the sinister Court of Owls’ secret passageways, or will Gotham finally fall under the Court’s full control?! 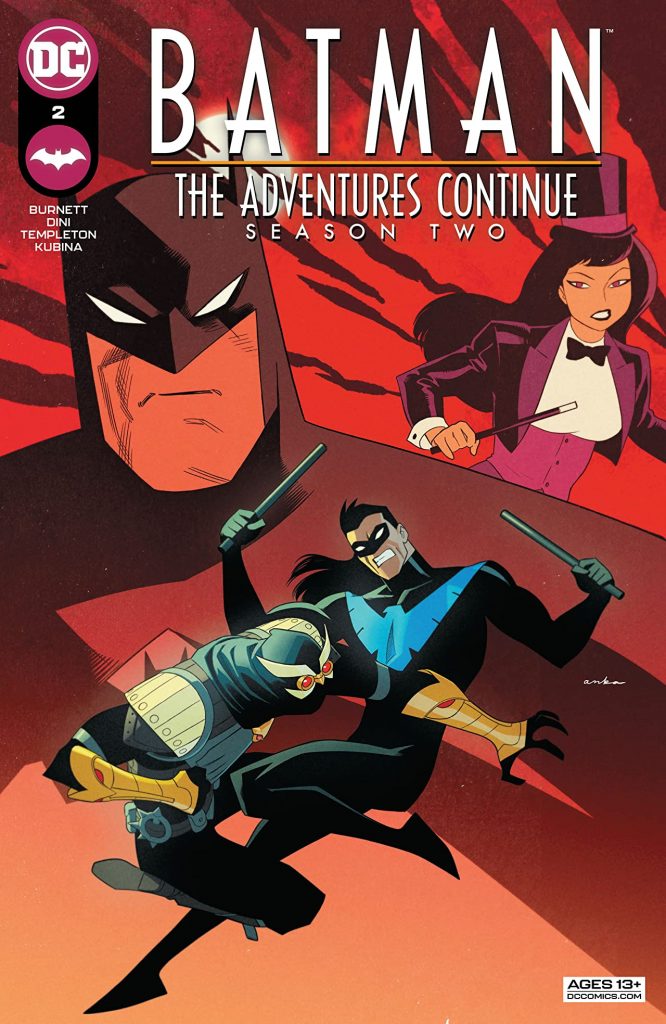 The story picks up in classic fashion-Batman investigating evidence in his crime lab, leaving a very bored Boston Brand to flit about. The arrival of Nightwing and Robin prompts Deadman to have some fun, inhabiting Alfred so he can properly greet “Dickie-Boy”. After greetings are exchanged, Deadman wants to show off for the young Robin and has Alfred do a handstand! This disrespect sets Batman off but gets rid of the crick Alfred had been feeling in his neck. For such a quick scene, Burnett & Dini get in some nice character moments and I’d imagine Templeton had fun drawing Alfred doing a forward flip!

Meanwhile, Talon reports in to the head of the Court of Owls, bringing some much-needed equipment so they can resurrect more of their brethren. As the apparent leader of the Court begins the reanimation process, Templeton makes a nice transition from the cadaver’s hand to the glove Batman is examining back at the Bat Cave.

I point out the transition because it was about here that I noticed the page layouts. It’s been the habit on their “digital-first” issues to be combined with another chapter when it gets printed, causing two digital “pages” to be printed as one full page. I noticed that here and couldn’t unsee it for the rest of the issue. It’s not a bad thing and the layouts certainly aren’t terrible by any stretch of the imagination. It’s just an odd little quirk given that plans seem to have changed for this season with a full issue being available in print the same day as on digital.

Mayor Hill’s funeral winds up being a catalyst for finding out all sorts of dirty secrets in the Hill family across the generations. I’ve been reading some late ‘70s /early ‘80s Batman recently and Hamilton Hill is a corrupt politician, out to discredit The Batman and Gordon. I had forgotten about this comic plot as primarily my exposure to the character was from Batman: The Animated Series where he is not depicted in such a light. The influence from that era of Bat comics is prevalent throughout the show, so it’s nice to see a Mayor Hill now aligned more closely to his comic counterpart, while still keeping those episodes where we didn’t know how secretly shady he was intact.

Given how epic the “Court of Owls” saga is in the comics, I felt slightly shortchanged that its animated counterpart was only a two-issue story. The storytellers definitely weave in some interesting twists and turns into the legend, making it all feel fresh and the addition of Deadman is a fun wrinkle, especially given his vulnerability to the Talons. It just didn’t have the same punch that the inaugural issue carried. One more chapter would have lent it a more grand feel, but I assume that’s not really the point of these episode-like stories. Azrael’s debut was also very self-contained in comparison to “Knightfall”, so a two-issue arc is par for the course.

Despite my expectations, this was a solid follow-up to part one. Templeton can do no wrong when it comes to the art and Burnett & Dini are well-versed in not only comics lore, but that of their own show, so they know how to weave things in to make it feel appropriate to the universe they’ve been building for decades. With an all-new Batman animated show on the horizon, it’s nice to see this iteration going strong in another medium! – Javier E. Trujillo