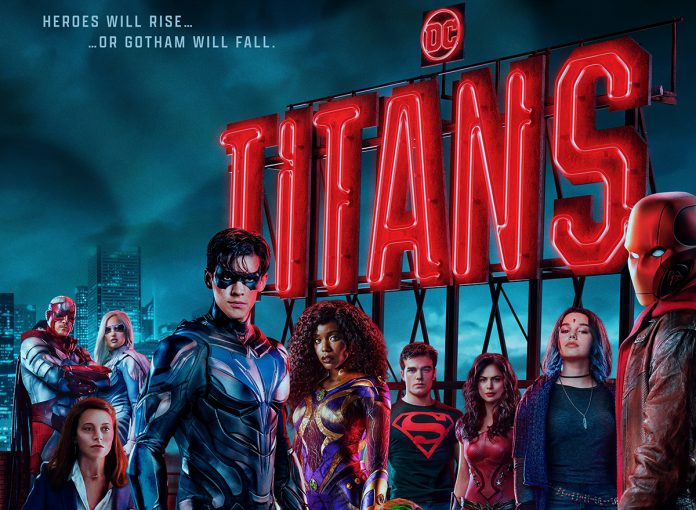 Titans has always been a show about Batman and his Robins.

The very first lines of the show are “Fuck Batman” spoken by Robin as he takes down a bunch of criminals who think they’re about to encounter The Dark Knight.  So, the stage was set from the very beginning on the type of story this series was going to tell.

The first two seasons focused mainly on Dick Grayson’s father-son relationship with Bruce Wayne, but when they introduced Jason Todd in Season 1 I think we all knew that eventually, we would be getting some kind of adaptation of A Death In the Family/Under the Red Hood.  It would be hard to tell a story about Jason without including his famous – and fan-chosen death by crowbar at the hands of The Joker.

When Episode 1 gave us that brutal scene I think many fans assumed we would get the backstory behind it right away, but if you’re a fan of TITANS you know the writers love the flashback episodes — which now brings us to “Lazarus”.  Those familiar with the story know how Jason was resurrected in the comic book, so the title of the episode should not be a surprise to anyone, but the way they go about it is a little different.

“Lazarus” picks up right where “Blackfire” left off.  Red Hood and Dr. Crane have escaped their encounter with Nightwing and we immediately see that Dick’s suspicions are correct.  It has been Crane pulling the strings all along and Jason is his pawn. But how…and why?

From here we are transported back 3 months and into Jason’s mind.  He is back at Wayne Manor and has been having nightmares about the events in San Francisco.  Bruce hears him and confronts him about his current mental state.  Jason proclaims he is fine but Bruce knows he is not.  In an effort to help Jason. he tells him unless he sees Dr. Leslie Thompkins (Krista Bridges) — a psychiatrist who knows about their “line of work” — he can no longer be Robin.

Bruce’s concern for Jason is a far cry from what we got earlier in the season when he was flippant upon learning he had died.  This Bruce is protective and fatherly and calls Jason “son” numerous times.  It is really the first time we’ve seen this since he was introduced in Season 2.   In what is his best performance to date, Iain Glen plays this to perfection.   Glen’s portrayal of Bruce Wayne has been a cross between Adam West and Christian Bale and the reception from fans has been lukewarm at best.  In “Lazarus”, it is the first time I feel like I am watching an actor put his own spin on the character.

It is clear Jason is still struggling with what Deathstroke did to him in San Francisco, but he isn’t the type to willingly open up.  He goes to see an old friend and tries to delve out a little street justice of his own, but after getting bested by one of Joker’s thugs he starts to question if he really is fit to be Robin and finally goes to see Dr. Thompkins.

The therapy sessions between Leslie and Jason reveal some key plot points to Jason’s downfall.  First, we learn he views Bruce as a father and desperately wants to please him.  More importantly, we learn Leslie knows about and has been exposed to Scarecrow’s fear toxin, which will drive Jason to make a terrible decision.

What ensues are a series of unfortunate events which send Jason down a terrible path and seals his fate.

In arguably the best scene in TITANS history, Bruce takes Jason to the alley his parents were murdered in and tells him he is taking Robin away from him.  It is a beautifully written acted father/son scene that shows Bruce’s realization that he has damaged Jason. Bruce wants to save him from both his pain and Jason’s desire to prove to Bruce that he can be the Robin he wanted him to be.

After being failed by his first father figure, Jason seeks out another and after the information he received from Leslie he turns to Crane.  He asks him to give him a formula for an anti-fear toxin to combat his fear which, it turns out, is what we see Jason take in Episode 1 before he goes to the fairgrounds and meets his demise.  Crane agrees but only after Jason agrees to give up secrets about Batman and the rest of the Bat-Family.

And now we know the how and the why.  In typical Scarecrow fashion, Crane used Jason’s fear of failing Bruce to manipulate him into doing his bidding.  After The Joker kills him, he resurrects Jason with the Lazarus Pit and creates the perfect soldier to combat Batman and the Bat-Family.

The Red Hood is born! Episode 5 has so much to unpack but it is all done in a careful manner.  In my opinion, it is the best episode of the entire series.  Credit goes to Bryan Edward Hill for writing this excellent piece of television and to the actors for doing incredible work, most notably Curran Walters, who continues to be the best cast character on the show.  His performance as Jason Todd is exactly how I have always pictured him to be.

The bar has now been set incredibly high for the rest of the season.  In years past, the show was a slow build but this season has been anything but.  Here’s hoping the rest of Season 3 continues to push the bar even higher! – Eric Holzmann