Skip to content
Avengers: Endgame is an epic movie and one that features a jaw-dropping final battle pitting nearly every superhero ever against Thanos and his army. Now, VFX company Weta Digital have shared a video which offers a behind the scenes look at how they helped bring that sequence to life.

As you might expect, much of what we saw was brought to life with visual effects but what’s particularly impressive is seeing how each of the backgrounds was added piece by piece.

It would have been easy to essentially copy and paste in the same background (after all, it’s not like any of us were looking at that with so much action taking place) but the level of detail here is phenomenal. That’s evident from the fact that the Nano Gauntlet was built from the inside out – wires and all – and that alone makes this video an absolute must-watch.

Avengers: Endgame is now available on DVD and Blu-ray.

Check out some recently revealed VFX stills from
Avengers: Endgame by hitting the “View List” button below! 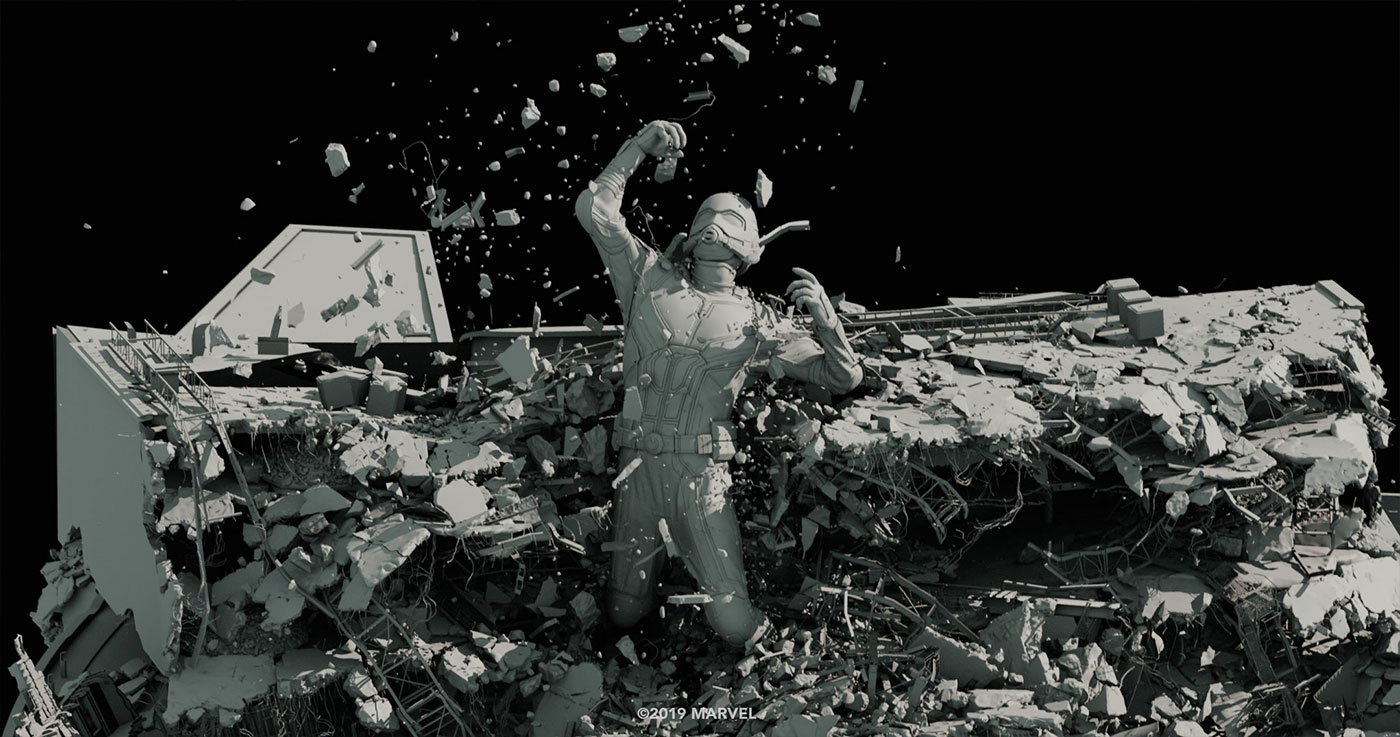 Things looked bleak for Ant-Man, Hulk, Rocket and War Machine at this point in the movie but Scott Lang managed to save the day by transforming into Giant-Man to break out of this rubble. 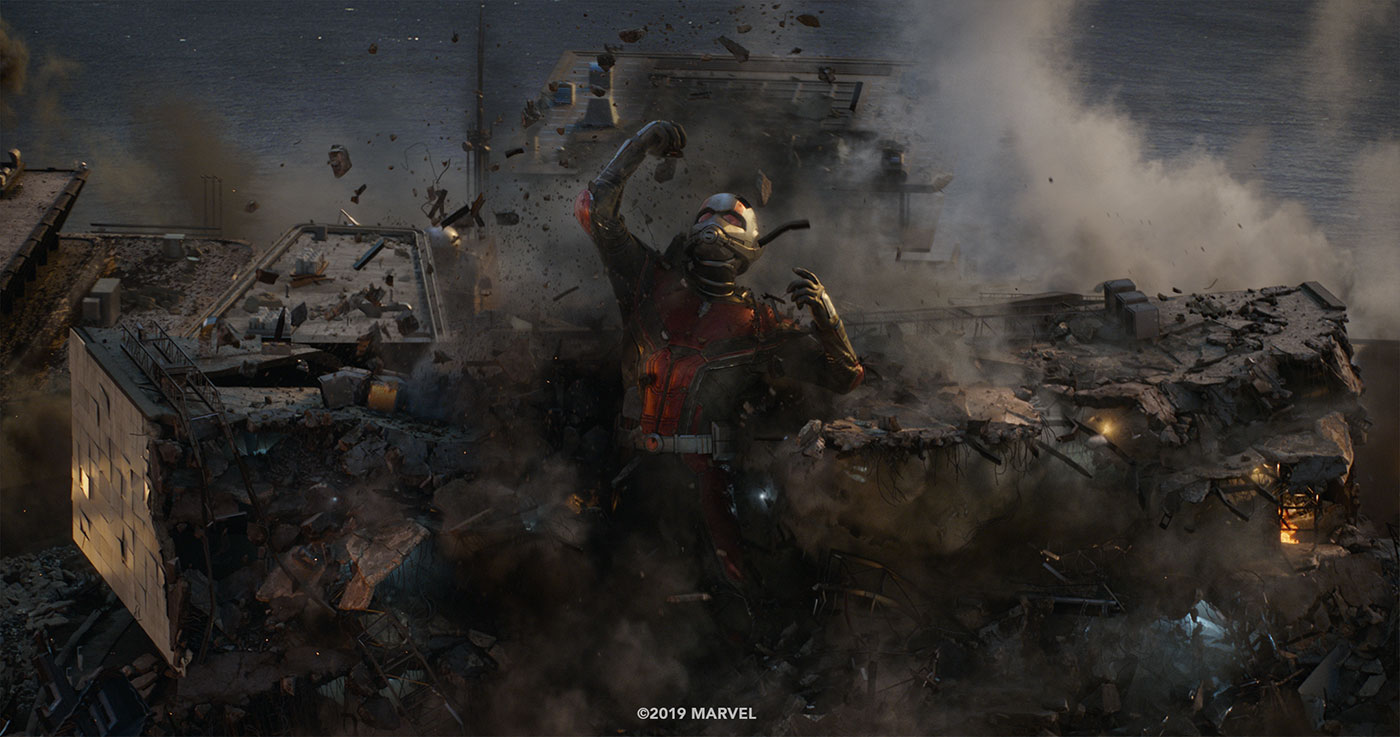 As you can now see, everything in this scene was brought to life with VFX and it’s really quite remarkable to witness the level of detail here and to realise that it was literally built from nothing. 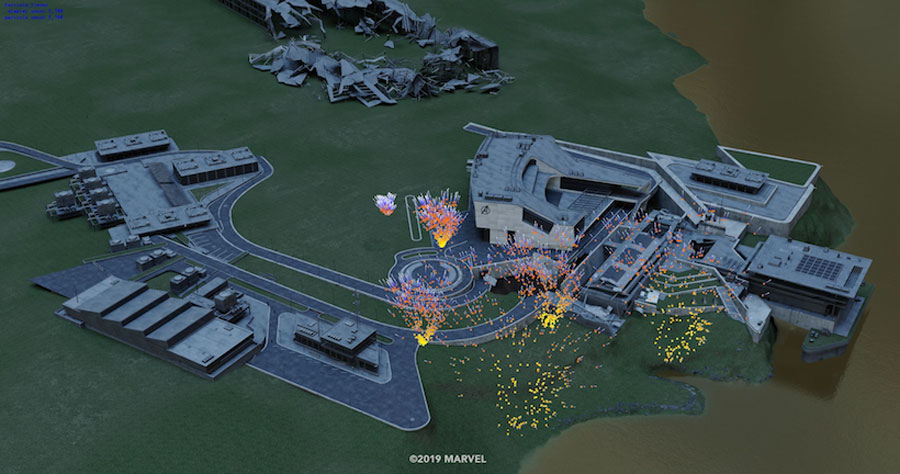 This may look pretty terrible on the surface but this piece of imagery served as the basis for Thanos’ attack on the Avengers Compound after he arrives in the present day with his army. 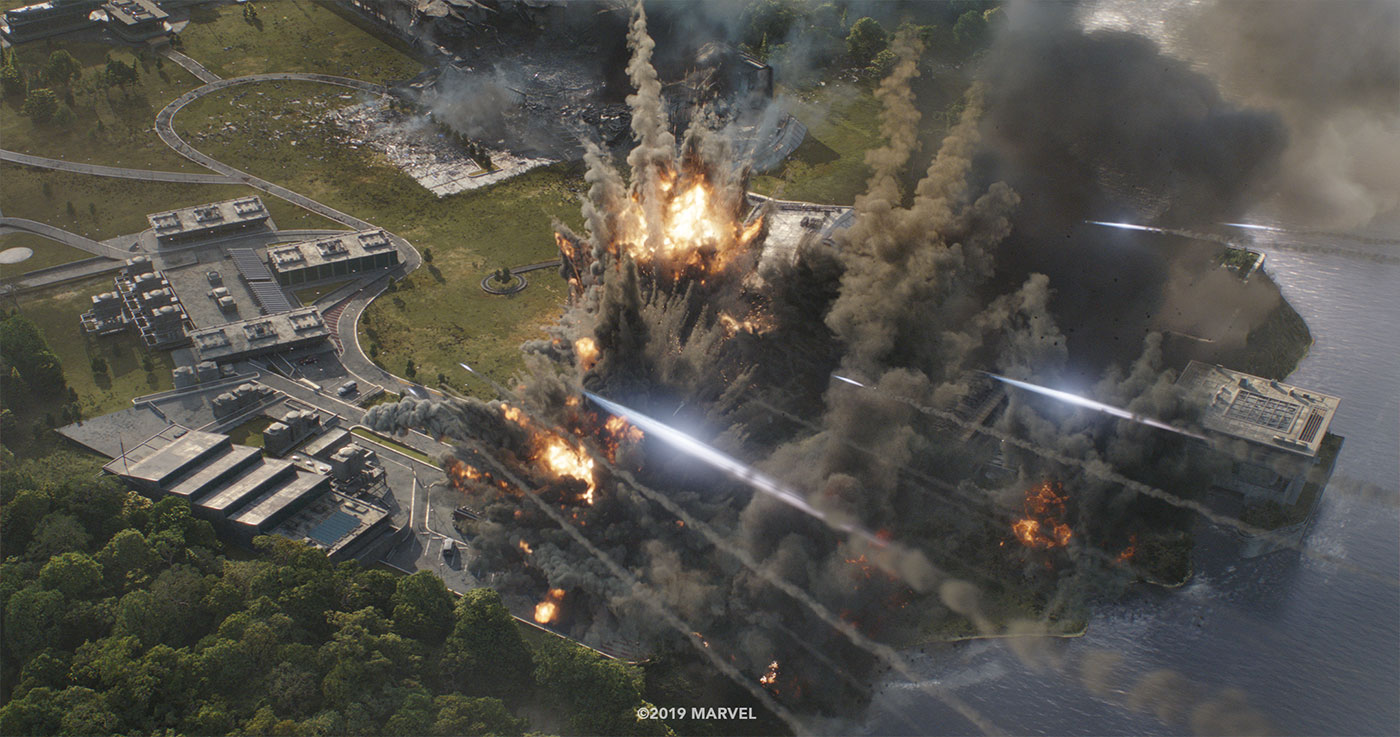 This is obviously the finished version and, well, it’s pretty surprising that none of the team died during this attack. Then again, that would have been an underwhelming way to kill them off. 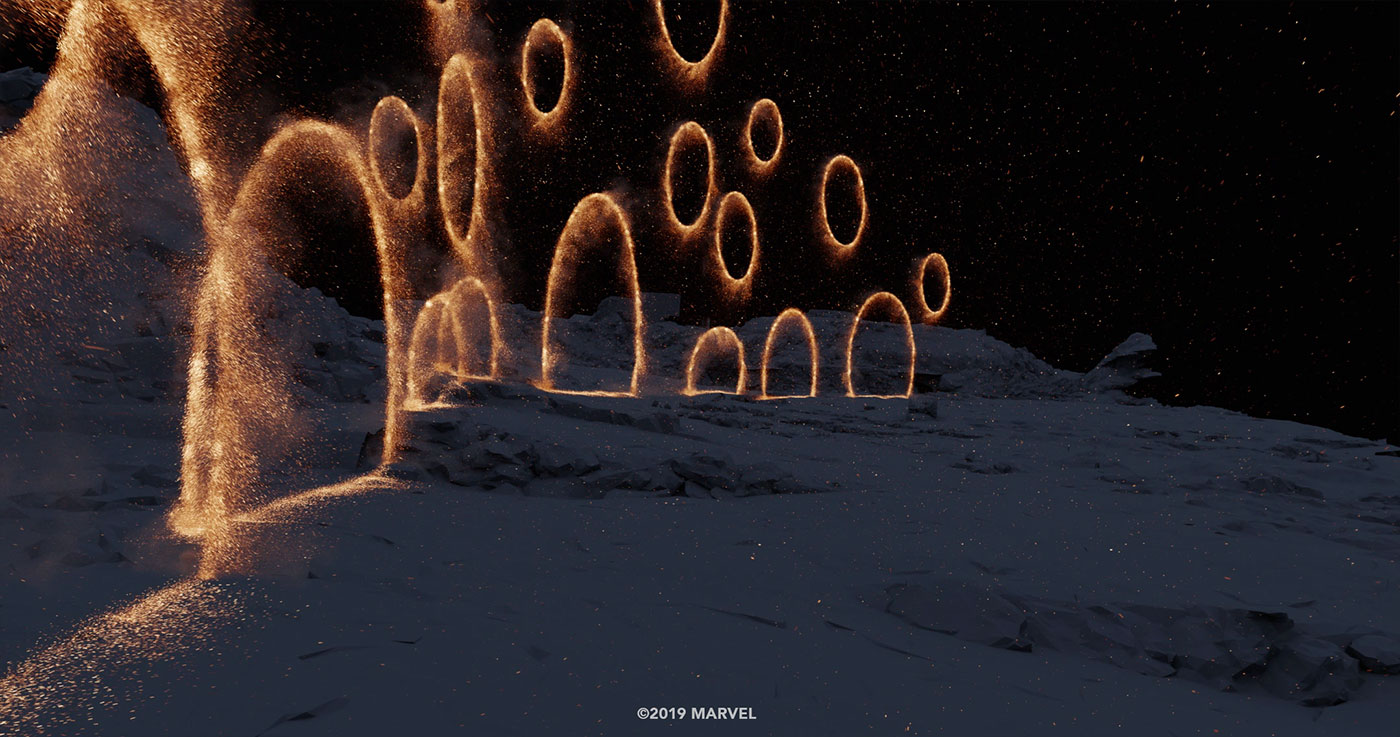 This doesn’t look overly exciting, right? Well, it’s obviously just the beginning of what would be the movie’s biggest sequence as Doctor Strange and his fellow sorcerers open a series of portals. 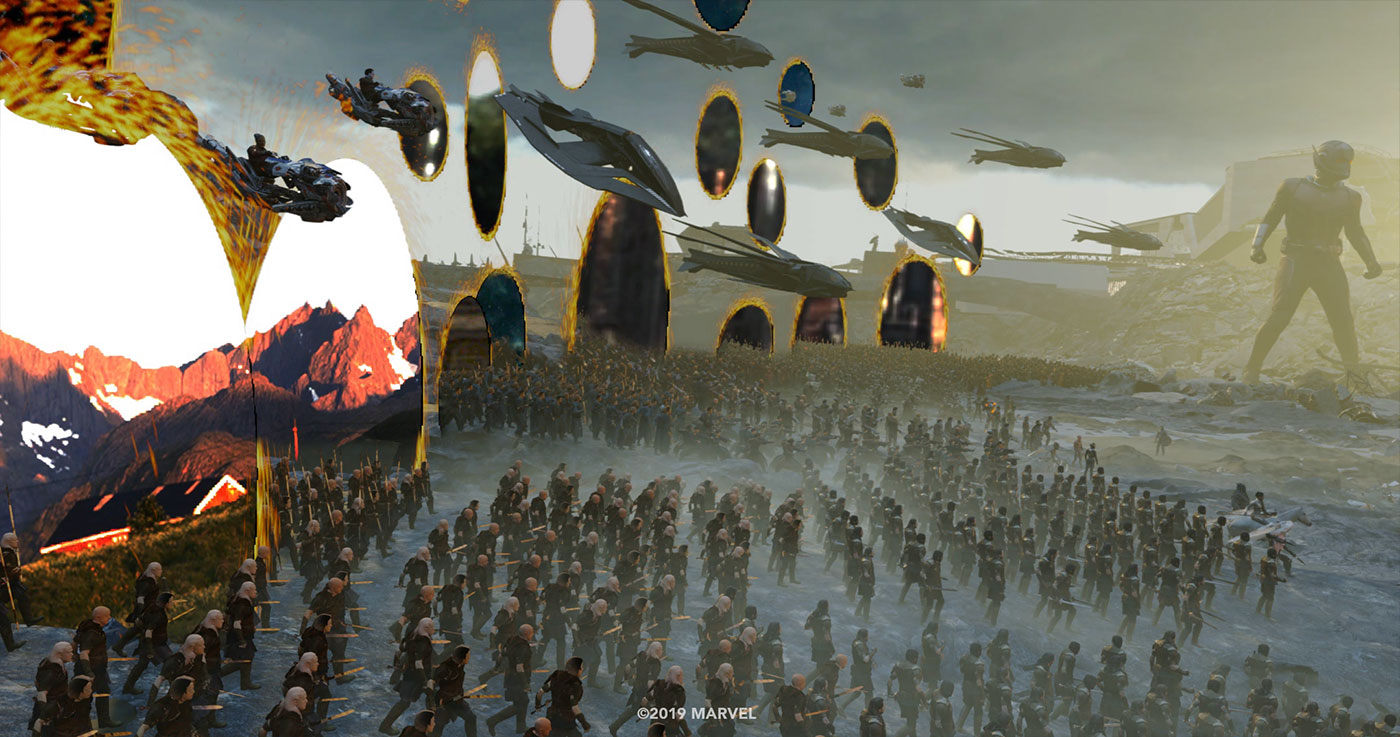 Things are really starting to come together here as we get to see the sorcerers, Asgardians (led by Valkyrie) and more arriving and ready to bring an end to Thanos’s machinations for good. 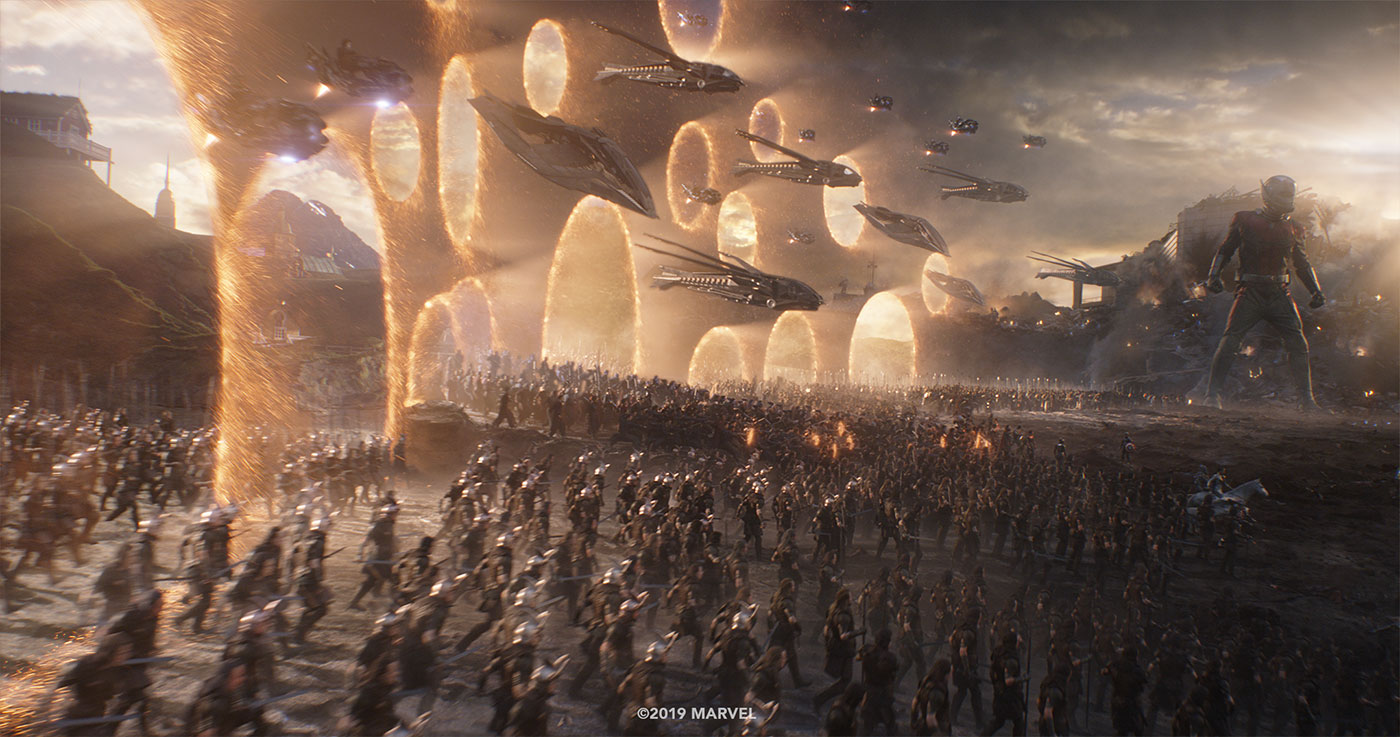 This “Portals” scene was set to an amazing piece of music by composer Alan Silvestri and is another example of a sequence in Avengers: Endgame that was completely built by scratch. Captain America wielding Mjolnir in this movie was obviously a highlight for comic book fans everywhere and this moment, in particular, was extremely memorable as Cap takes down Thanos. Avengers: Endgame needs to arrive on Digital HD and Blu-ray ASAP because this final battle demands multiple viewings. For now, go see it in theaters and help the movie take down Avatar‘s record!


Continue reading below to check out Iron Studios’ Captain America
statue featuring the hero unleashing the power of Mjolnir! 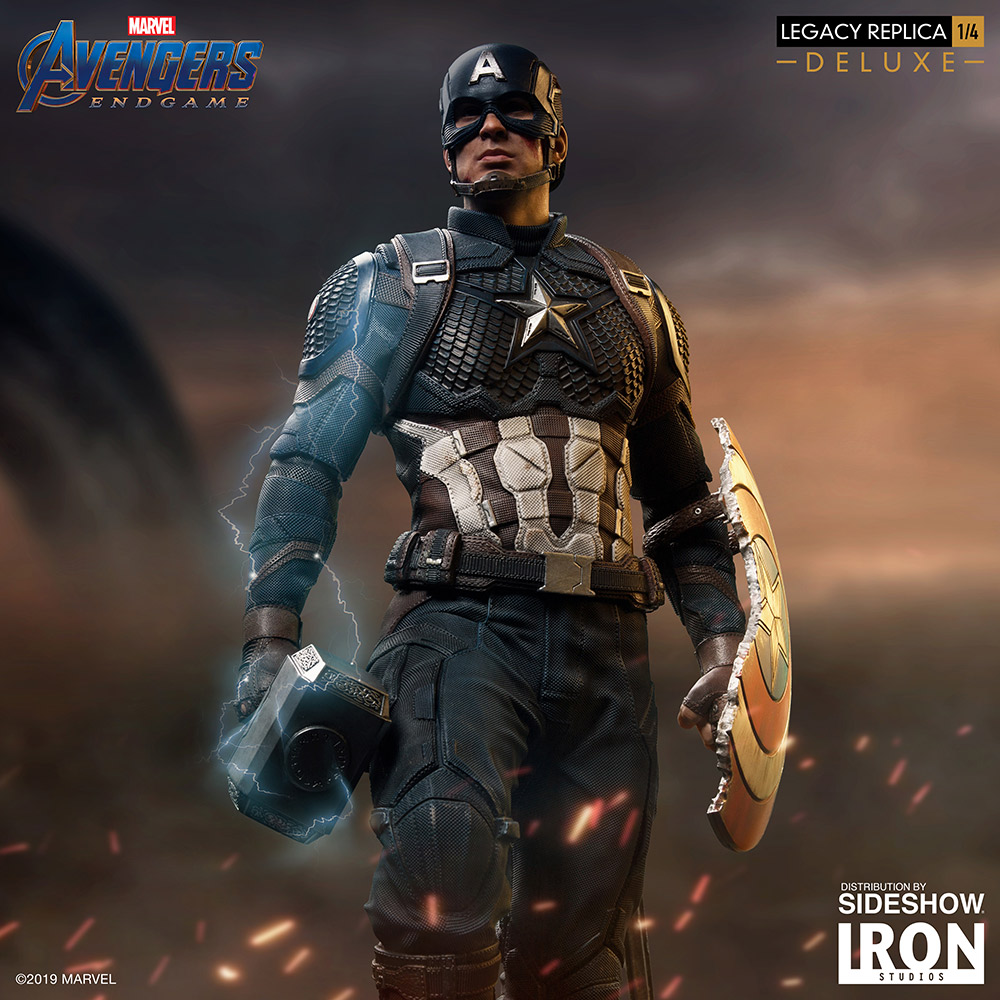 Marvel Studios President Kevin Feige has said that his entire career was leading up to the “On Your Left” sequence in Avengers: Endgame and it’s easy to see why; all those heroes assembling really does feel like the culmination of everything we’ve seen happen in the MCU over the past ten years. 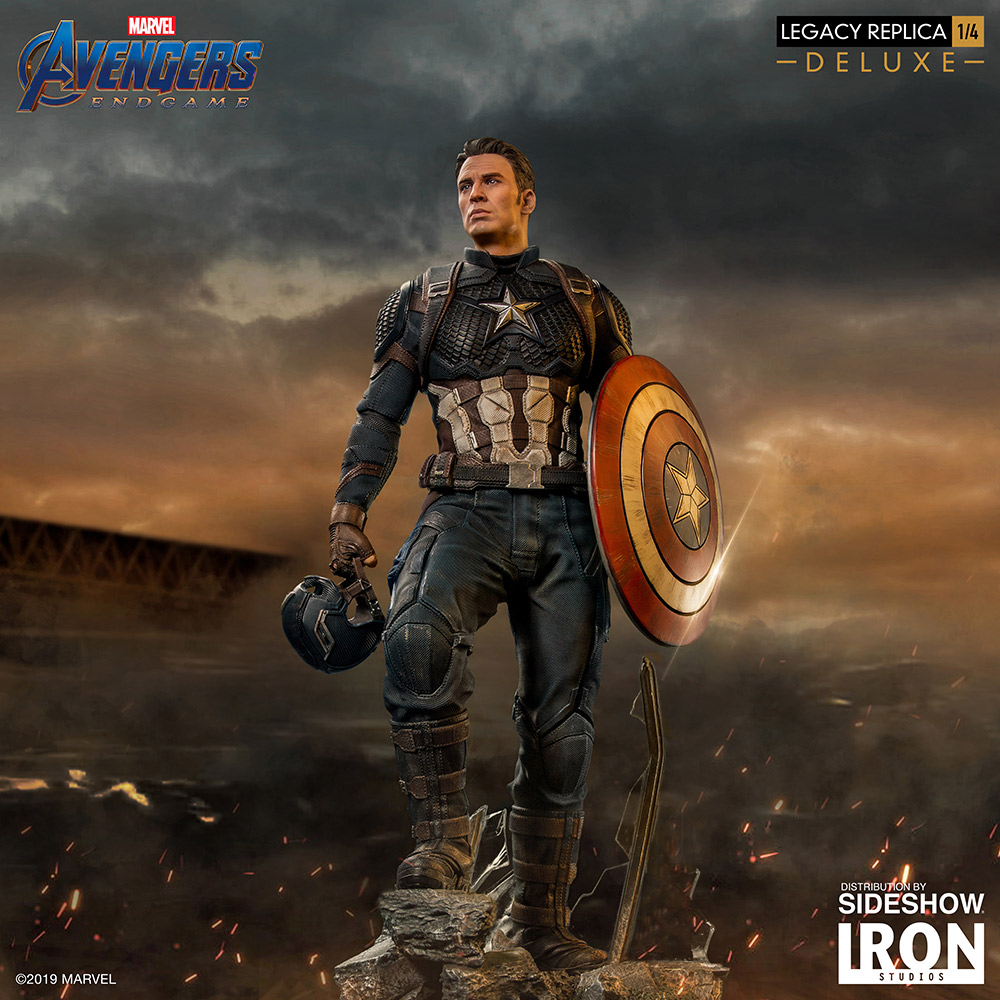 The “Avengers Assemble” moment is one fans have been hoping to see on the big screen for years now and there are plenty of times it could have happened (it was even teased at the end of Avengers: Age of Ultron). However, Marvel Studios was better off waiting as it felt earned in this moment. 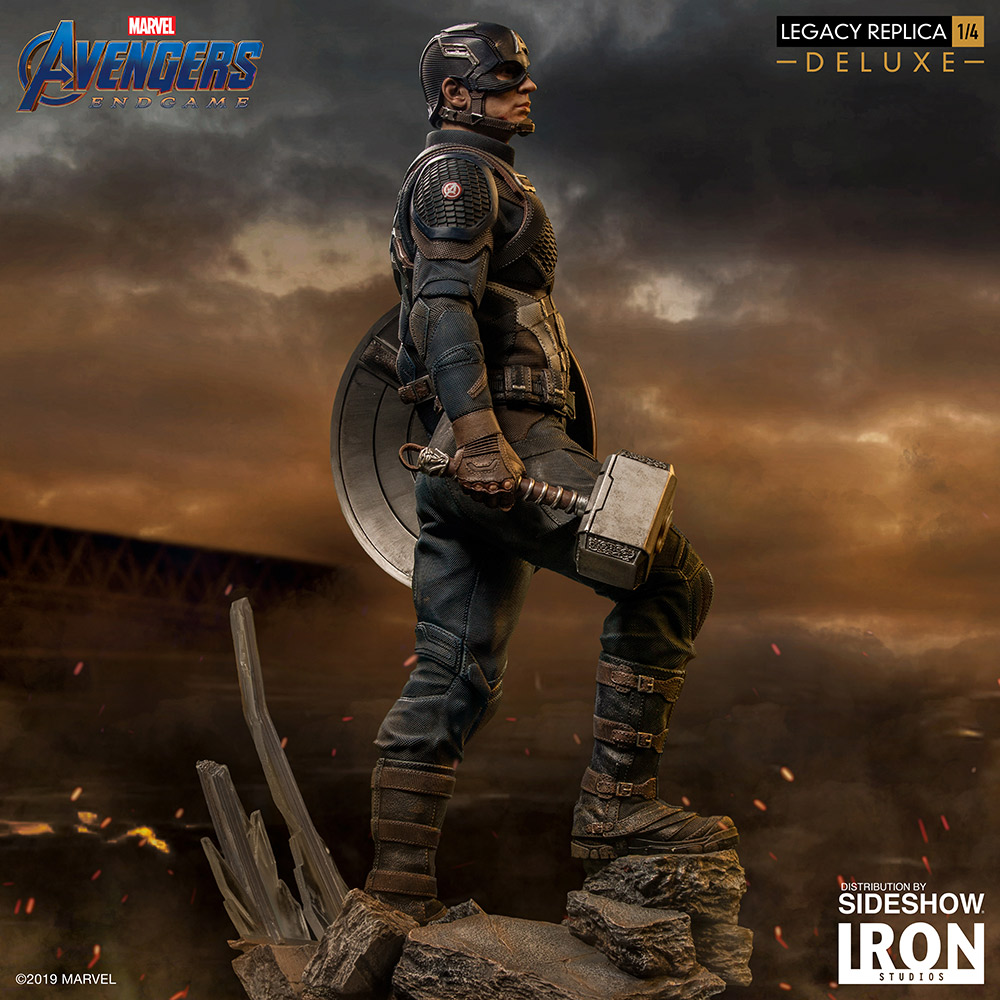 As for Steve Rogers being able to lift Mjolnir, that too was teased back in 2015 but it seemed at the time that Captain America was only worthy enough to shift it a little bit. Well, since then, we’ve learned that he was only pretending to be unable to wield Mjolnir so he could protect Thor’s feelings! 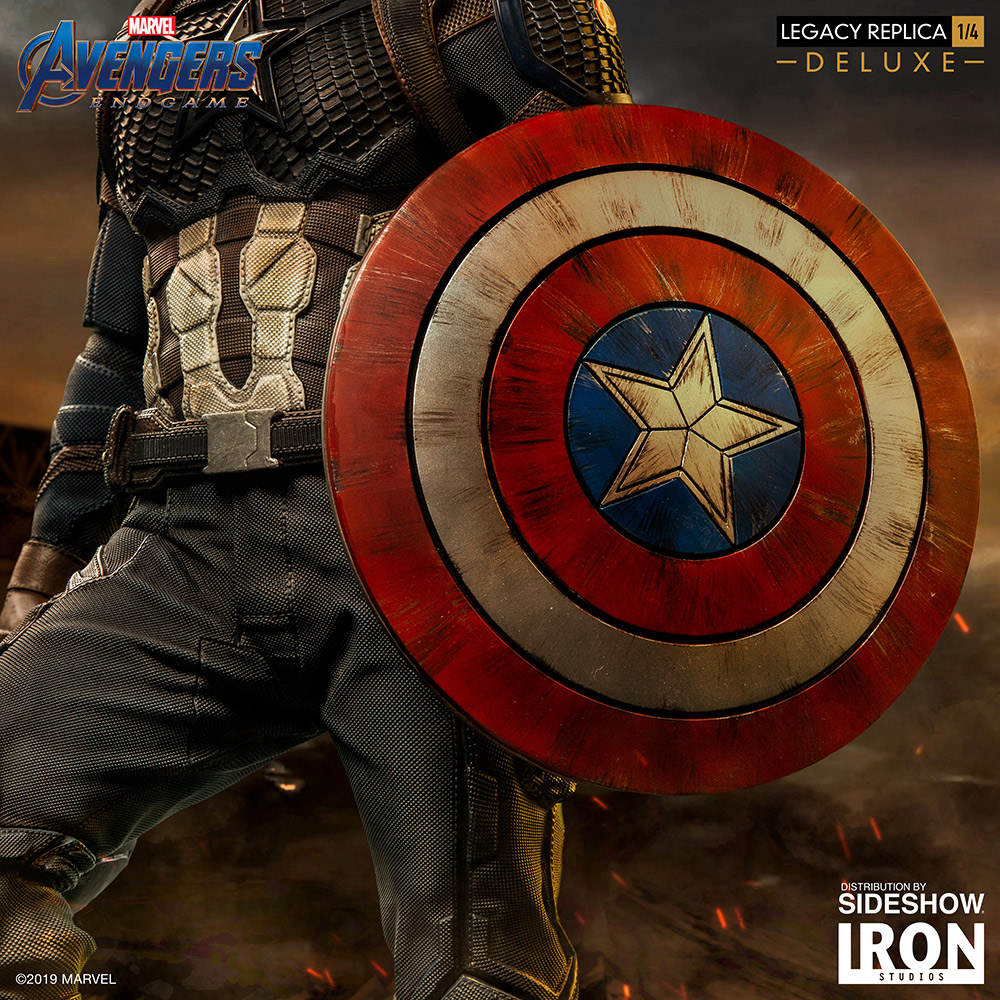 What was really cool about Steve using Mjolnir was the fact he could summon lightning (bear in mind that the hammer’s inscription promises that whoever’s is worthy enough to lift it is also worth of unleashing Thor’s powers). The visual of Cap doing so won’t soon be forgotten. 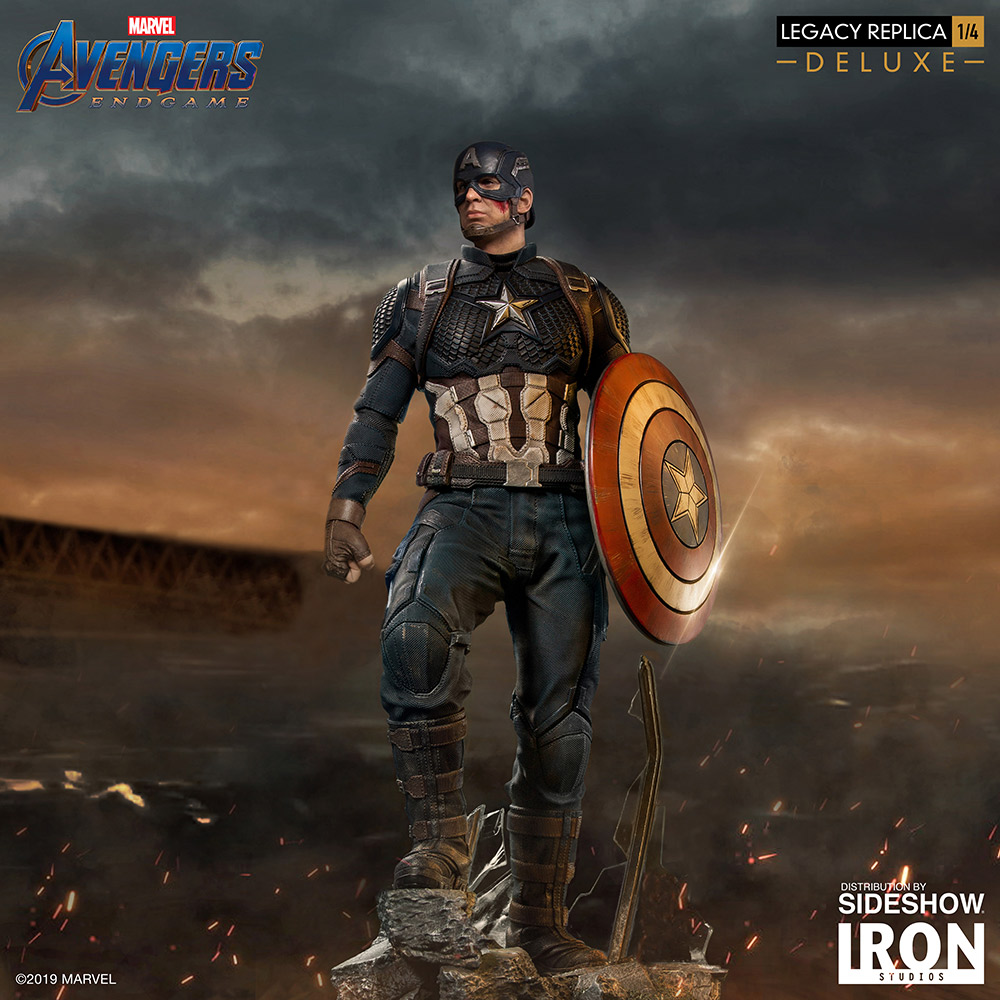 At the end of Avengers: Endgame, Steve travels back in time to return Mjolnir to its rightful place in history. That is, of course, the events of Thor: The Dark World and it’s interesting to wonder what he might have gotten up to in Asgard when he returned both that and the Aether after Rocket managed to retrieve it from Jane Foster. 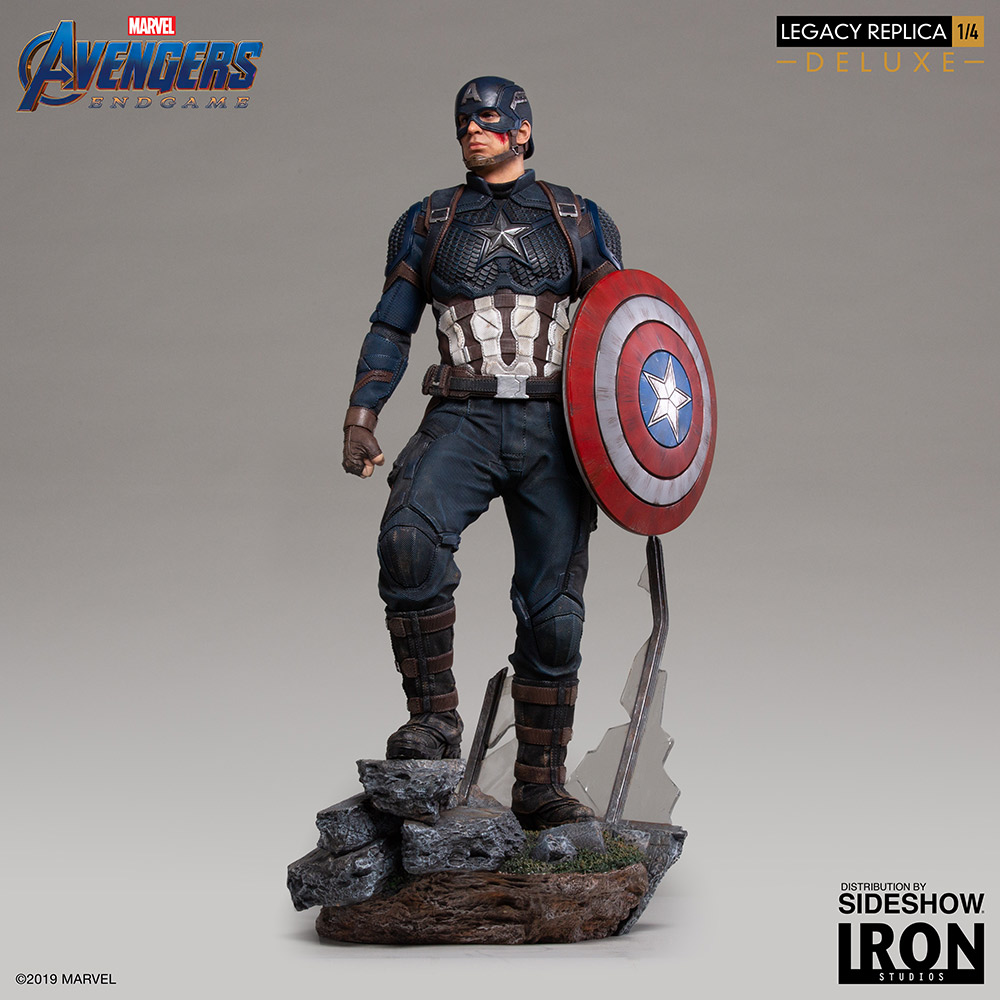 All of the hero’s travels through time remain a mystery to us right now and something tells me that Marvel Studios could choose to explore this somewhere down the line. That would involve Chris Evans reprising the role but I’m sure Disney would offer him a handsome sum to play Captain America on their streaming service! 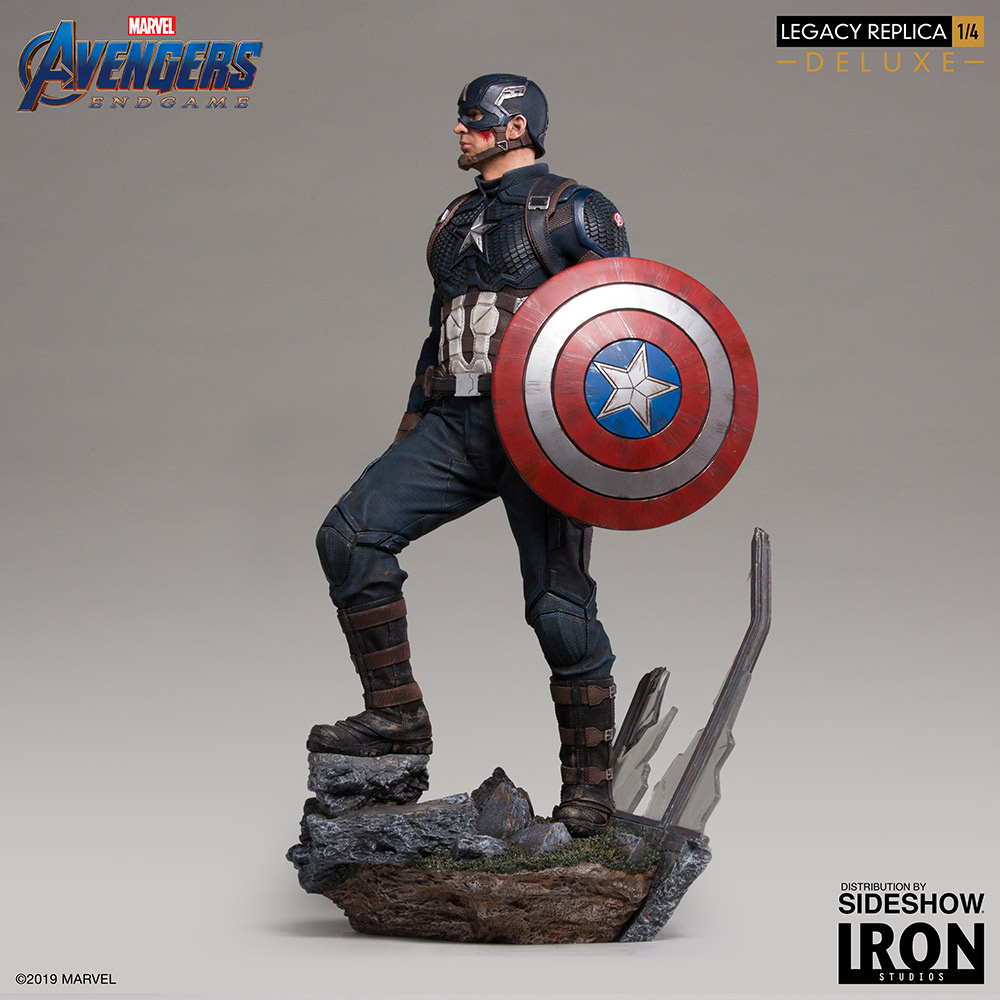 Something which has been semi-confimed, though, is the fact Chris Evans will voice the Star Spangled superhero in the What If? animated series. While that was originally billed as a take on the classic comics, something tells me it could explore the ramifications of The Avengers’ trip through time. 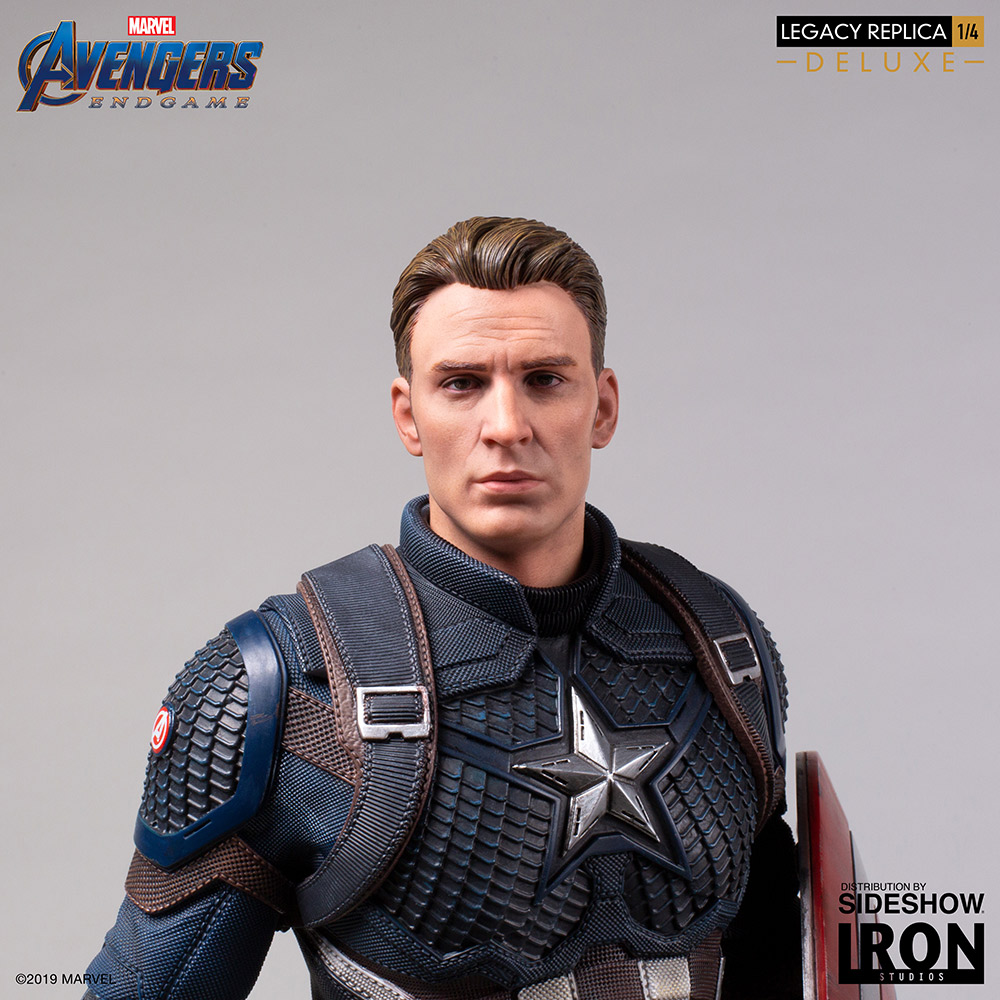 The detailing on Chris Evans’ face here is very impressive but you would expect that to be the case when the statue will set  you back nearly $800! Personally, I was really please to see Captain America’s mask remain on during the final battle (unlike Age of Ultron). 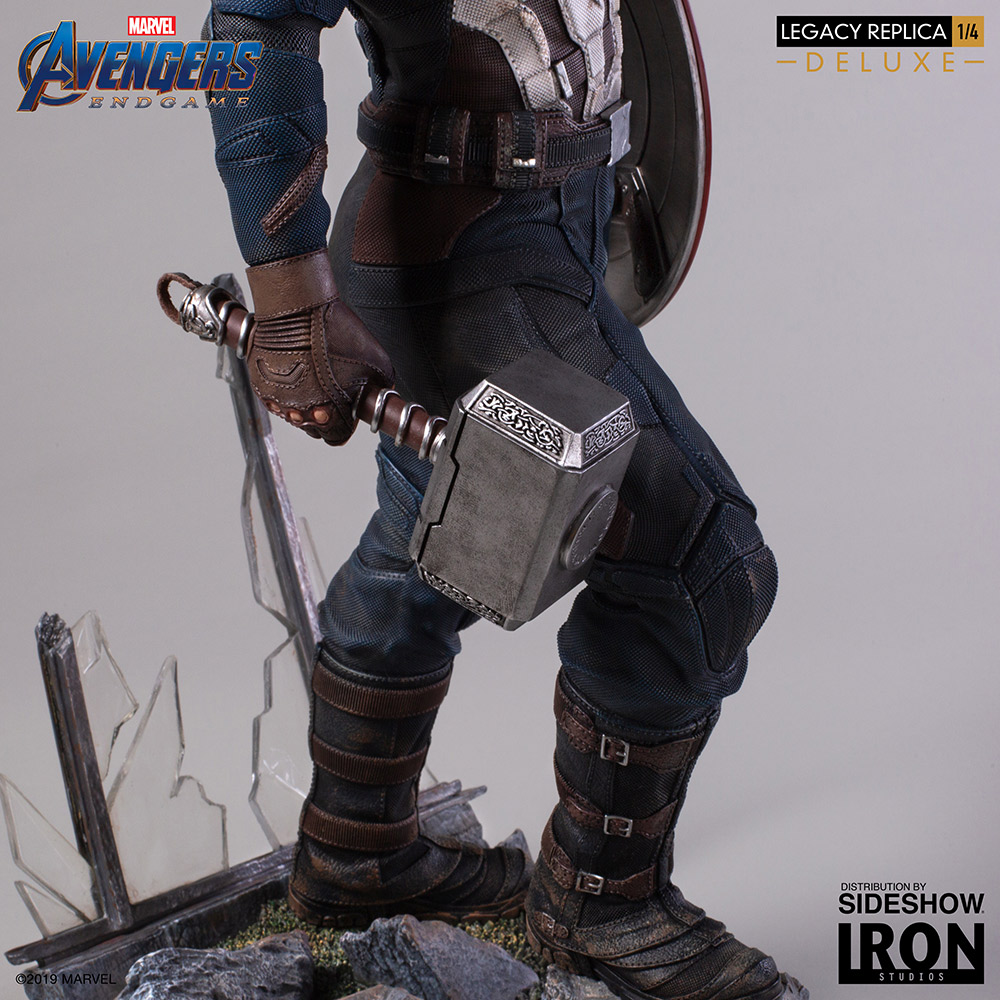 Going back to Captain America’s future, we now know that Sam Wilson (a.k.a. The Falcon) will inherit the mantle and that’s a plot thread that will presumably play out in the Disney+ series he will share with The Winter Soldier. The big question, though, is will we see more of Old Man Steve Rogers? 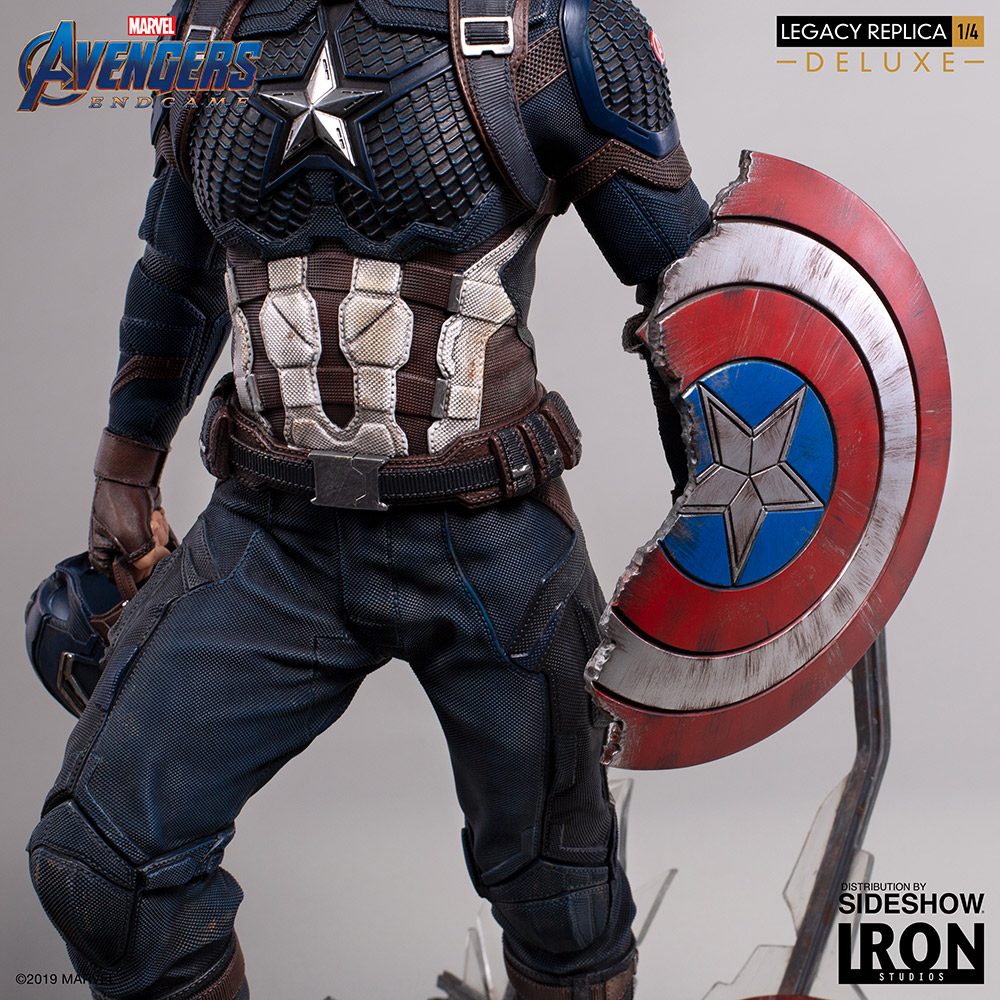 When he presented Sam with a new shield, it was clearly a totally different one and not simply a repaired version of the one that was shattered by Thanos. The prevailing theory is that Steve made that in the timeline he lived his life out with Peggy Carter in because his shield was obviously frozen in ice alongside himself (time-travel is weird). 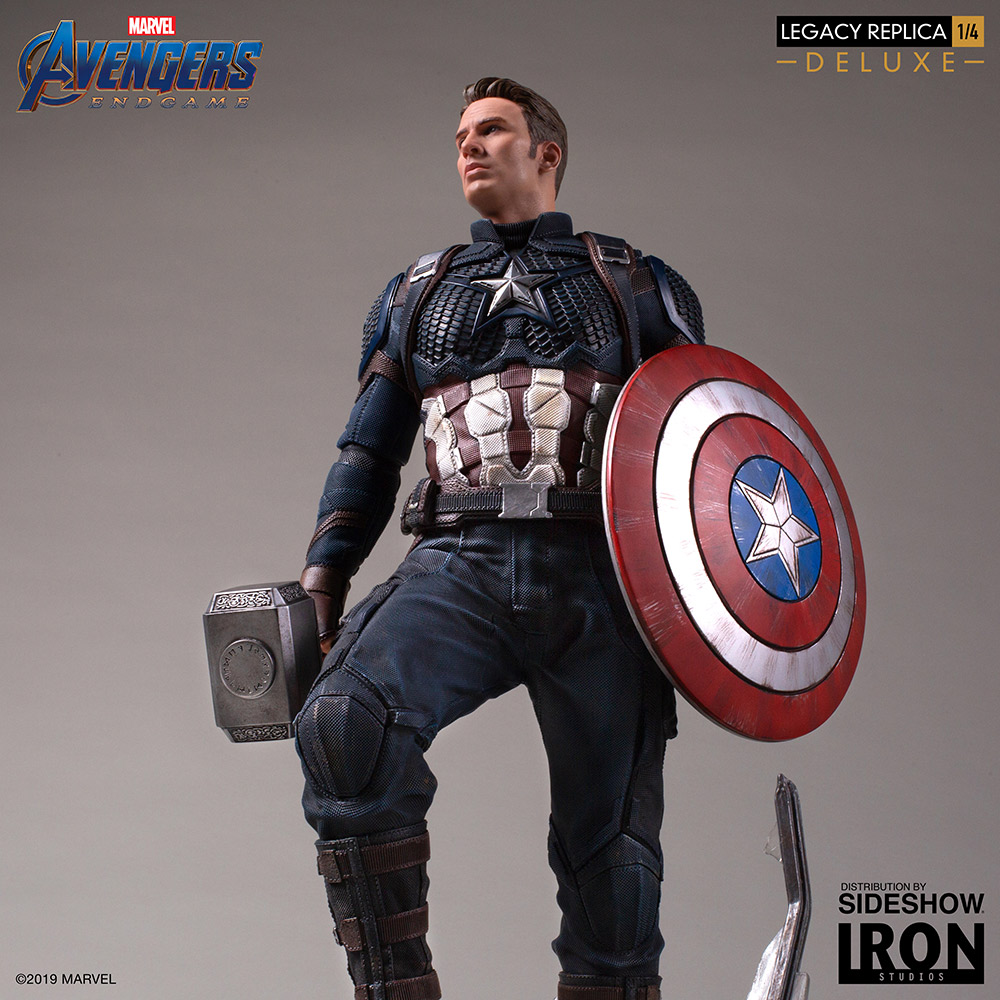 There’s been some disappointment that Bucky isn’t the new Captain America but given the way he’s been handled in the MCU, it’s easy to see why The Falcon was the more logical option. The big costume reveal showing him suited up as Captain America could very well end up breaking the internet when it comes our way! 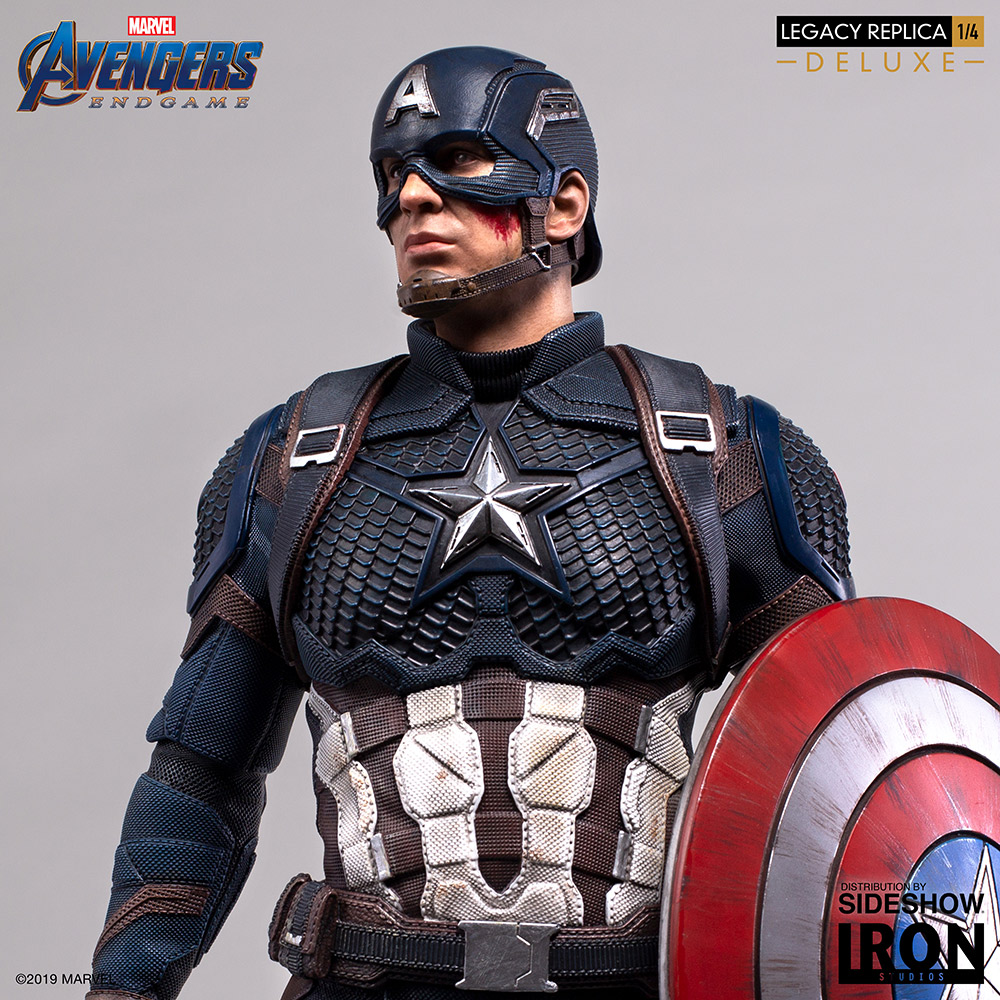 The Falcon wont just be a small screen Captain America, of course, because while that transformation looks set to play out on Disney+, Kevin Feige has confirmed that the actions of these characters in these shows will be reflected on the big screen as well. In other words, the new Cap will appear in the movies too! 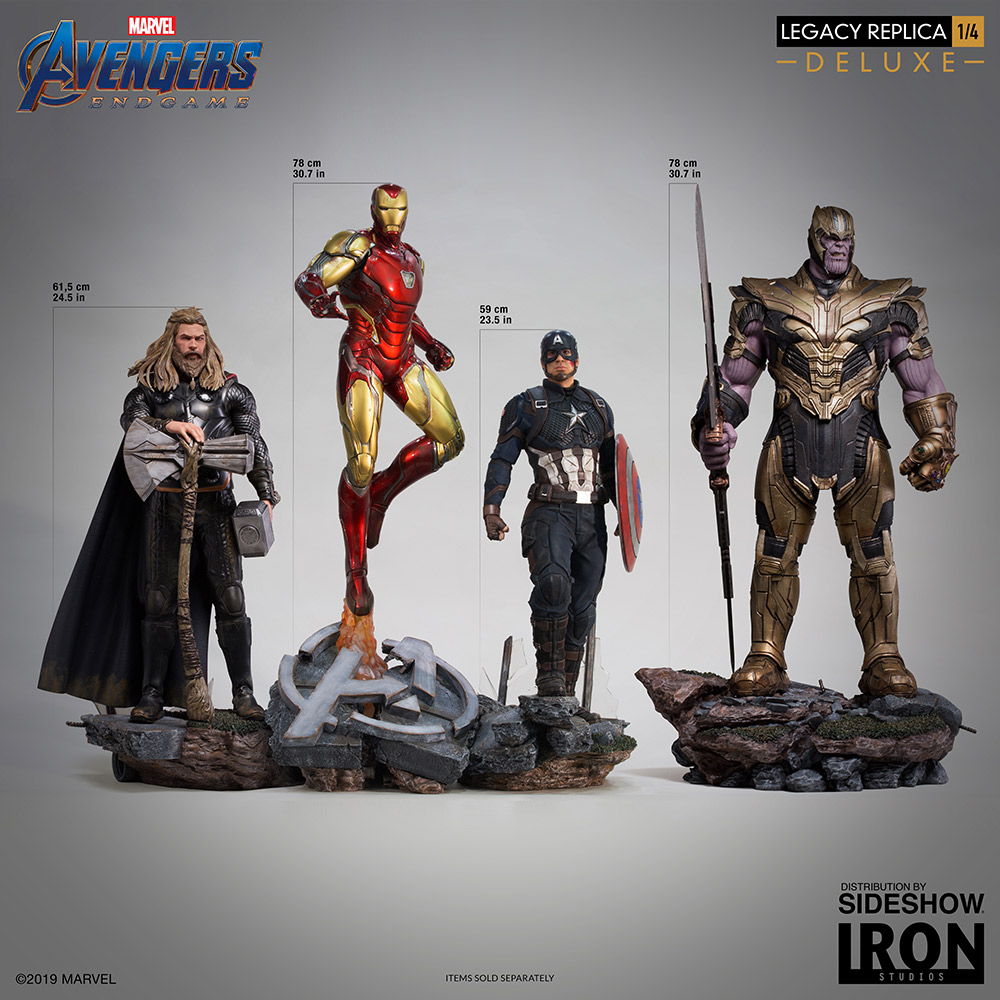 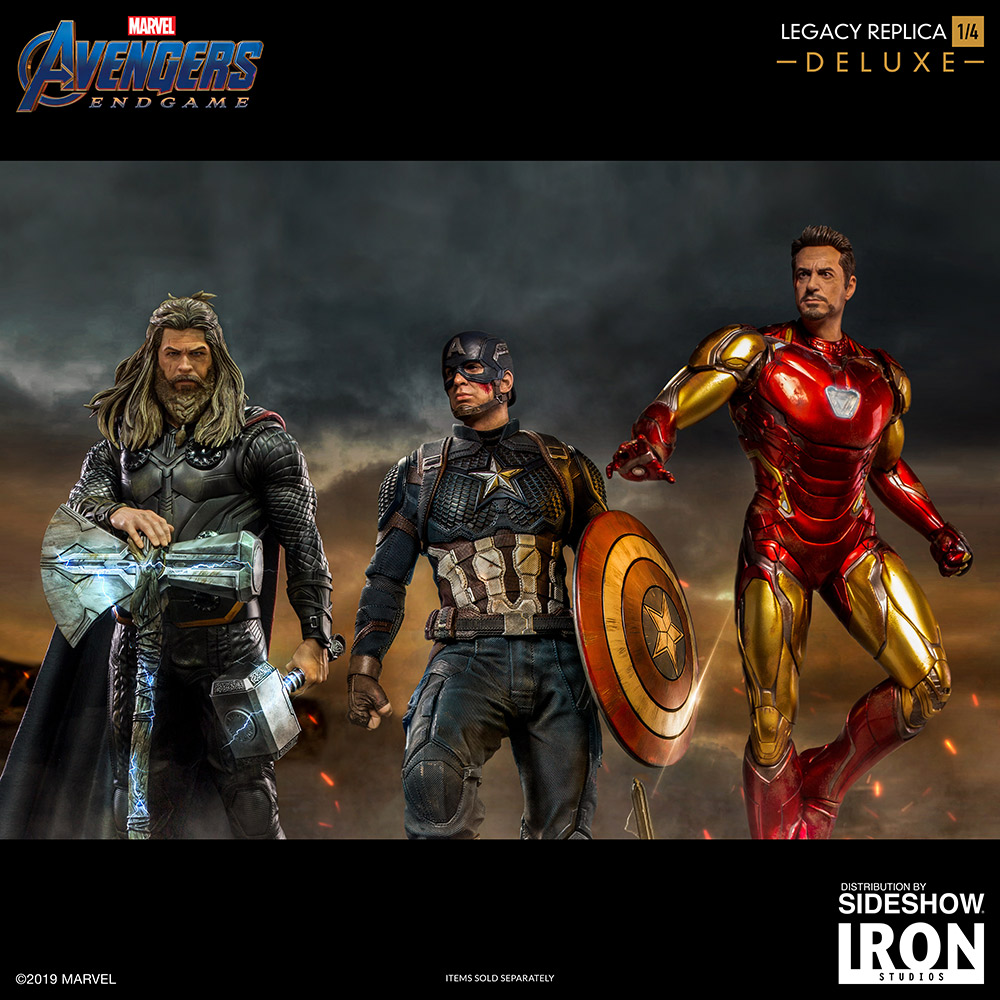 As a set, these three look truly phenomenal. Thor is rocking his badass, Viking-inspired look and Iron Man is wearing his comic book armour (a fitting choice for his final appearance in the MCU). Unfortunately, if Captain America is $800, you can imagine how much it would cost you to own the entire set…and Thanos! 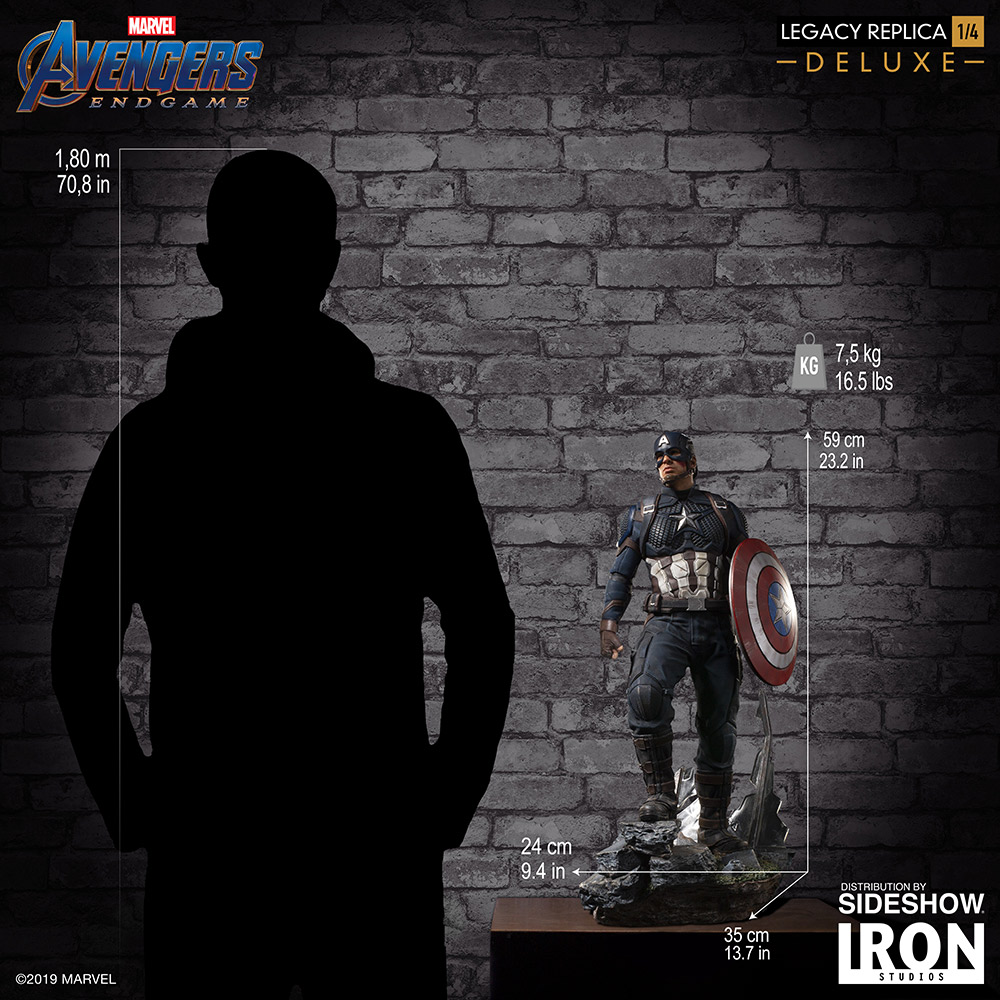 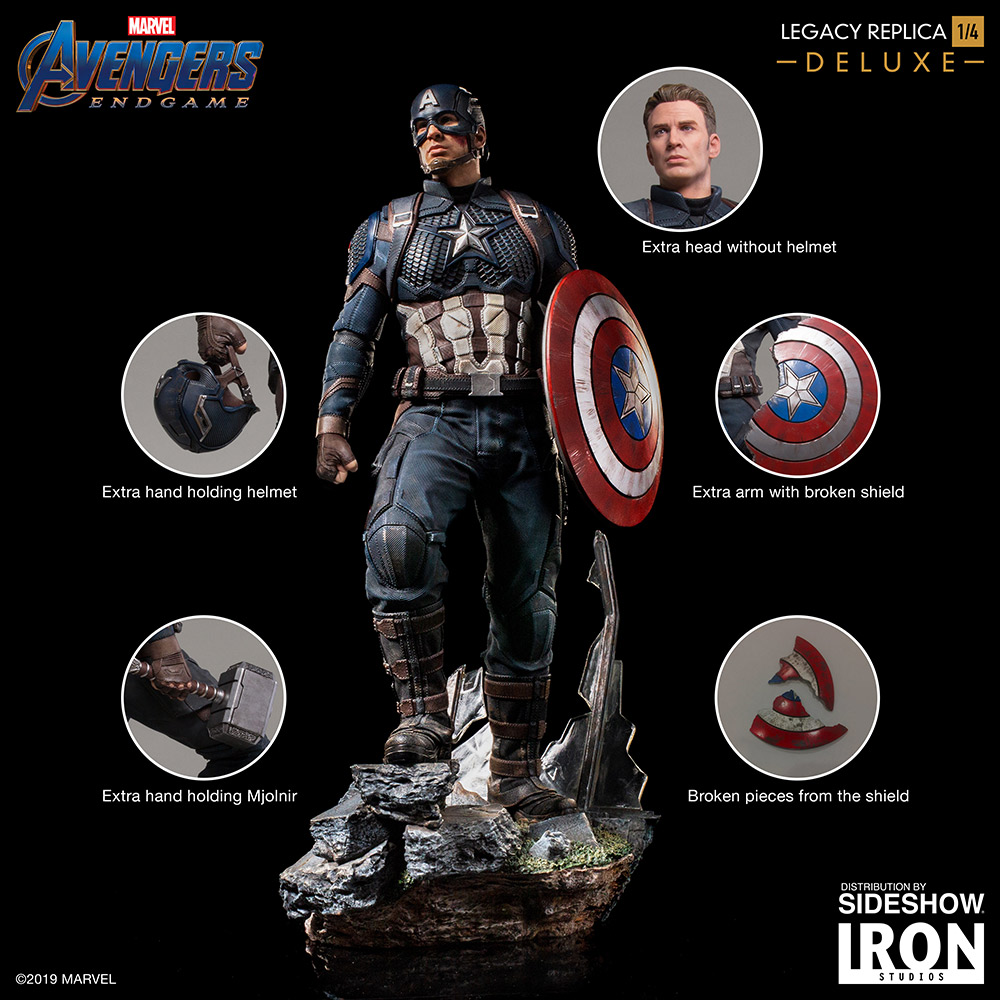 What do you guys think about this Avengers: Endgame statue from Iron Studios? Worth the money or simply too much for your average collector? As always, let us know your thoughts in the comments section down  below!