Skip to content
Heading into 2015’s Fantastic Four movie, it was clear that Fox and Josh Trank had something very different planned for Marvel’s First Family. Initially, it seemed like that might be the right direction to take things in, especially after the cheesy, comedic movies which bombed in 2005 and 2007.

Unfortunately, various behind the scenes issues and extensive reshoots meant that the movie we ended up with was a total mess but we now have concept art revealing what might have been.

As well as vastly different takes on Doctor Doom, we also get to see early versions of the Fantastic Four themselves along with some downright awesome unfilmed ideas which included a new version of Latverial and Castle Doom being created in the Negative Zone/Planet Zero. We even have one of the Mole Man’s Moloids and other terrifying landscapes and creatures you need to see.

To check out this gallery of Fantastic Four concept art, all you need to do is hit the “View List” button! 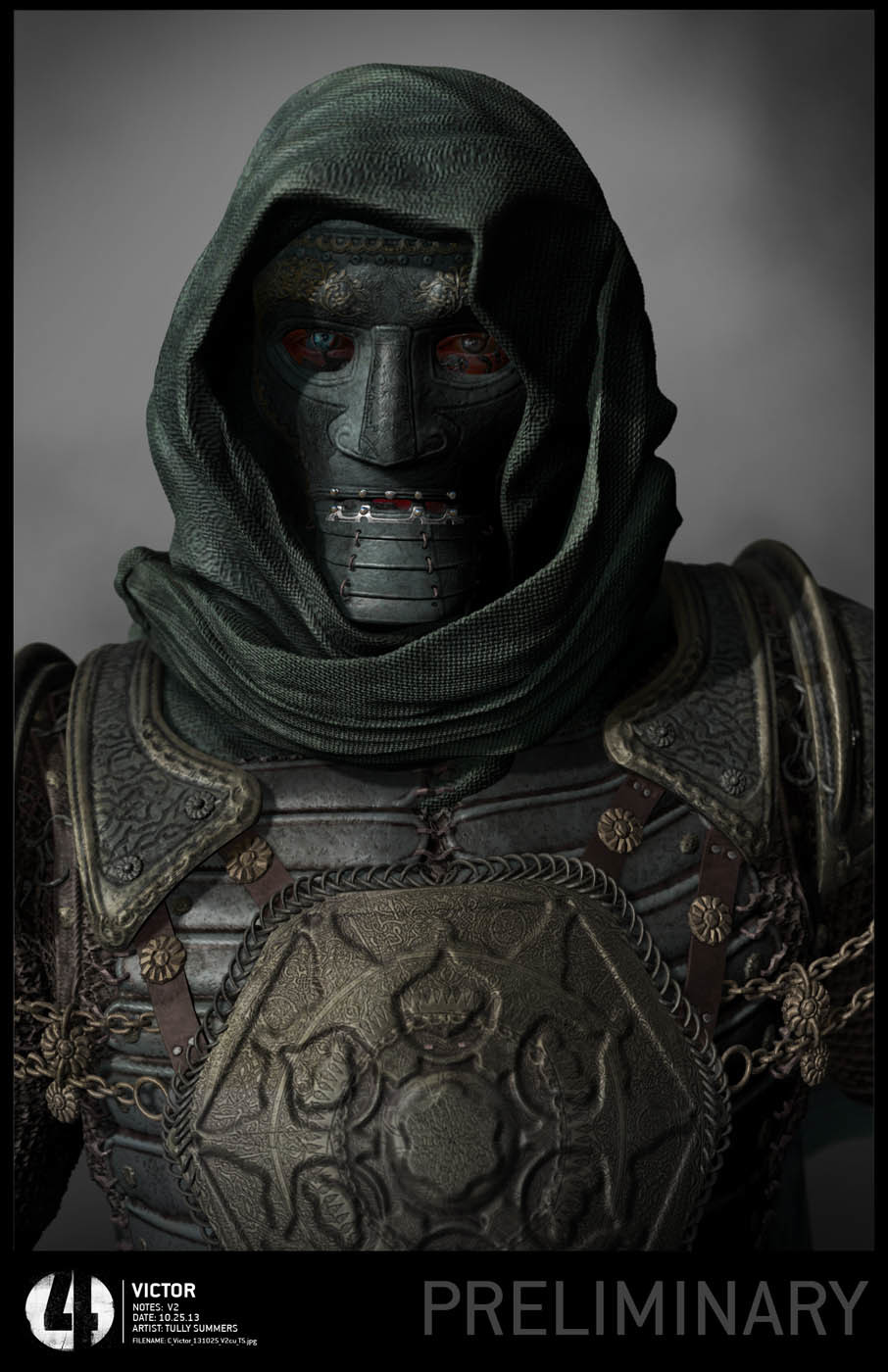 Doctor Doom ended up looking really quite bizarre in the movie itself but this version looks more in line with the comic books, albeit a little more Medieval and “classic Latverian” in nature. 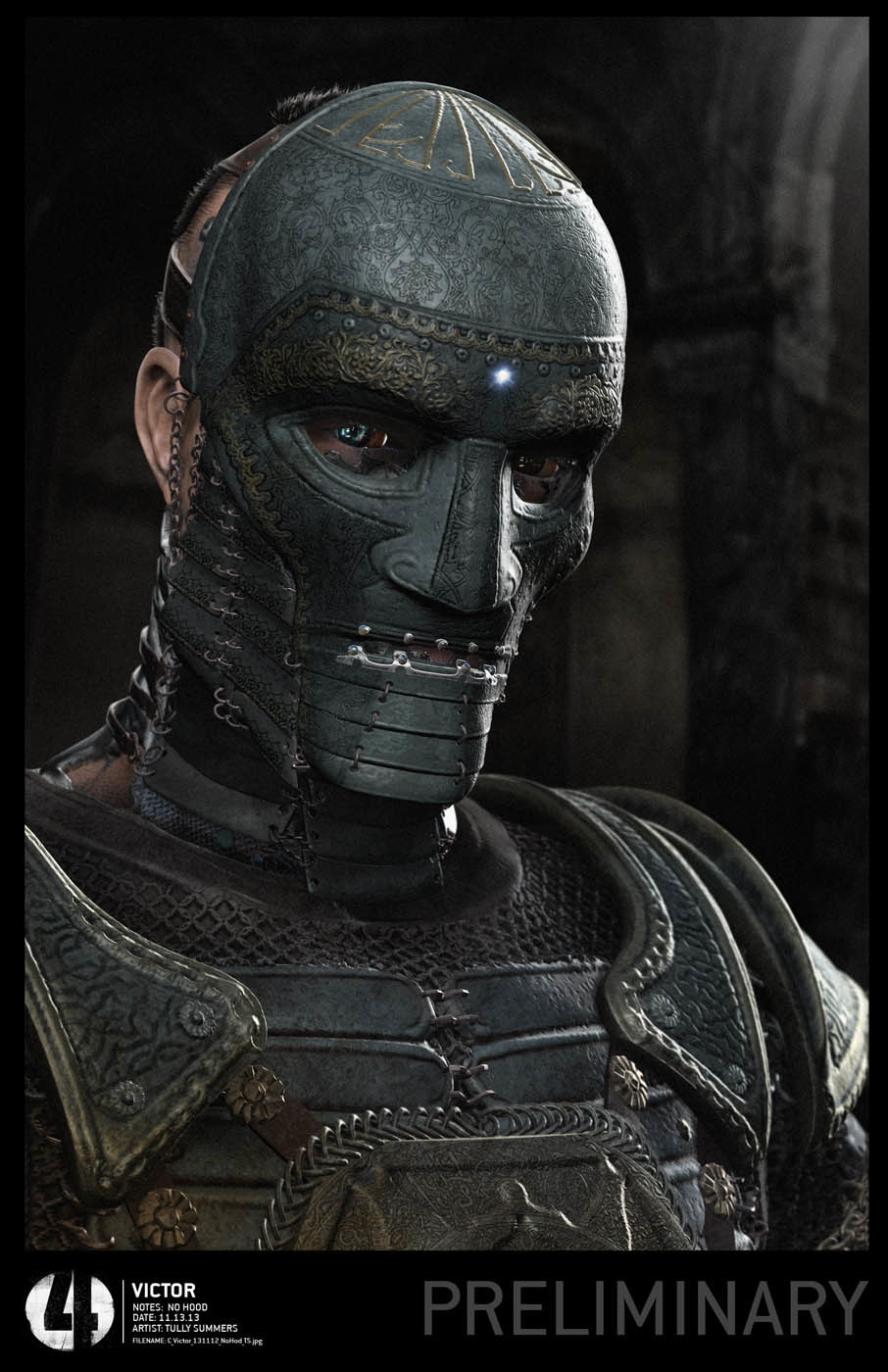 “First it fused his environmental suit to his body, (like the metal of his helmet merging with the matter of his eye),” Summers says of the explosion that created Doom on Planet Zero/the N-Zone, “and then shatters the very integrity of his body, almost creating “floating islands” of himself.” 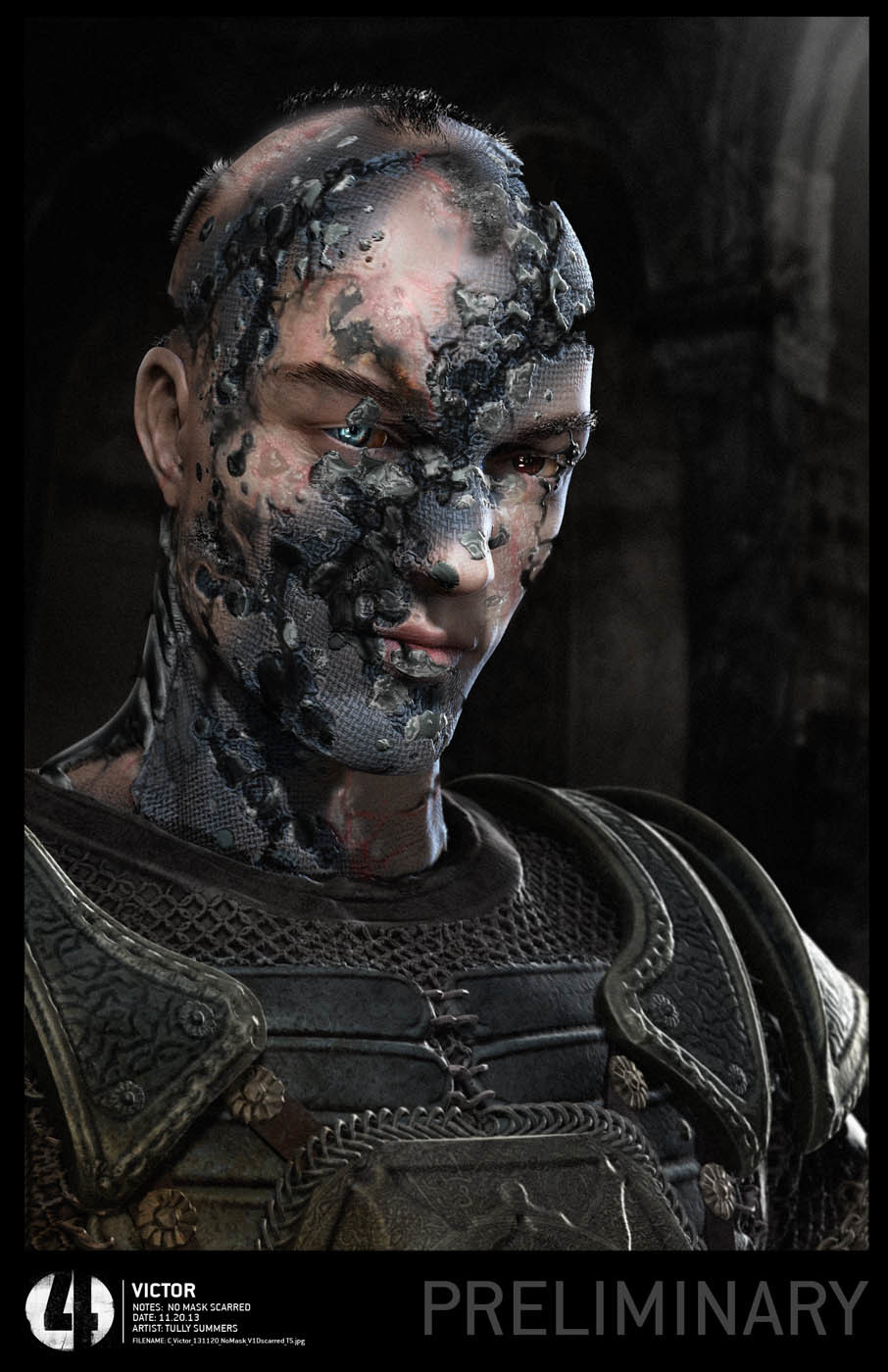 One of the coolest things about the comics is that we’ve never really got to see what’s beneath Doom’s mask but the movie decided to do away with that mystique and this was the end result. 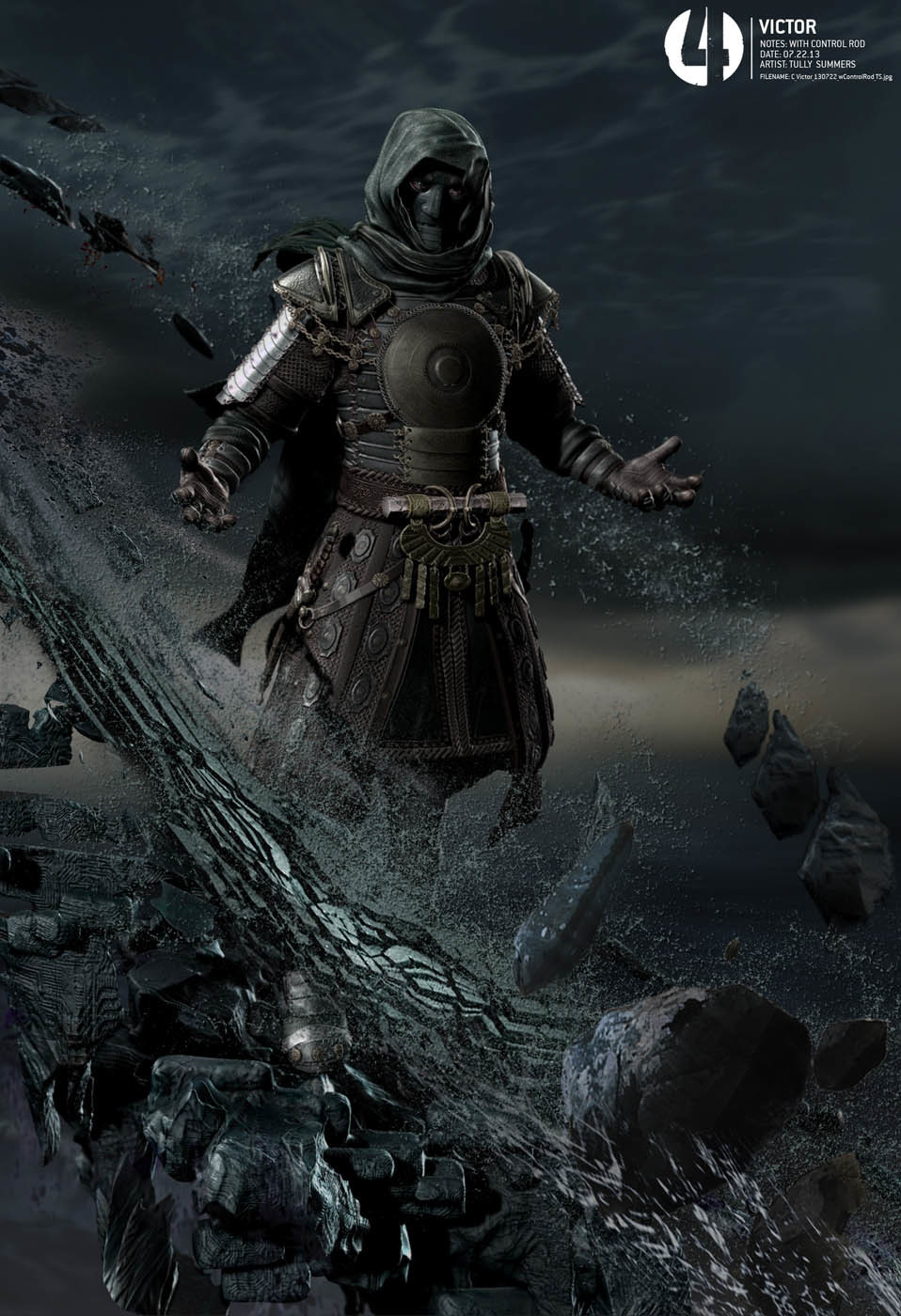 “My early Victor designs were intended to ground the classic Doom iconography in plausible historic influence,” the artist explains. “Though horribly altered from the the planet zero disaster, it leaves Victor with the ability to manipulate the matter of planet zero creating what ever he chooses.” 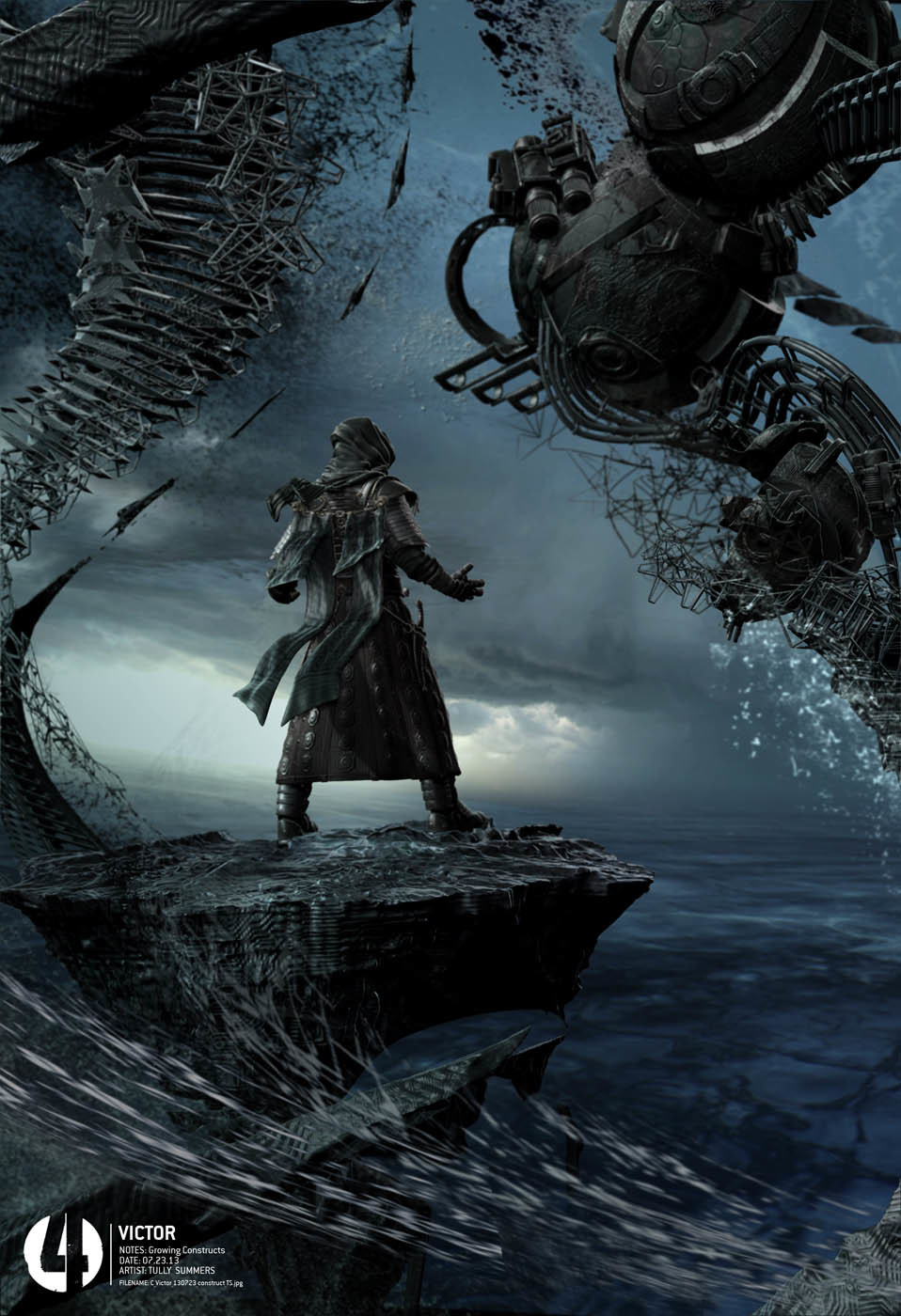 “In this case a suit of armor reflecting the historical heyday of his country Latveria,” Summers adds. “I combined Turkish and Mongolian influences to come up with his Latverian look. Production eventually went with a very different idea.” 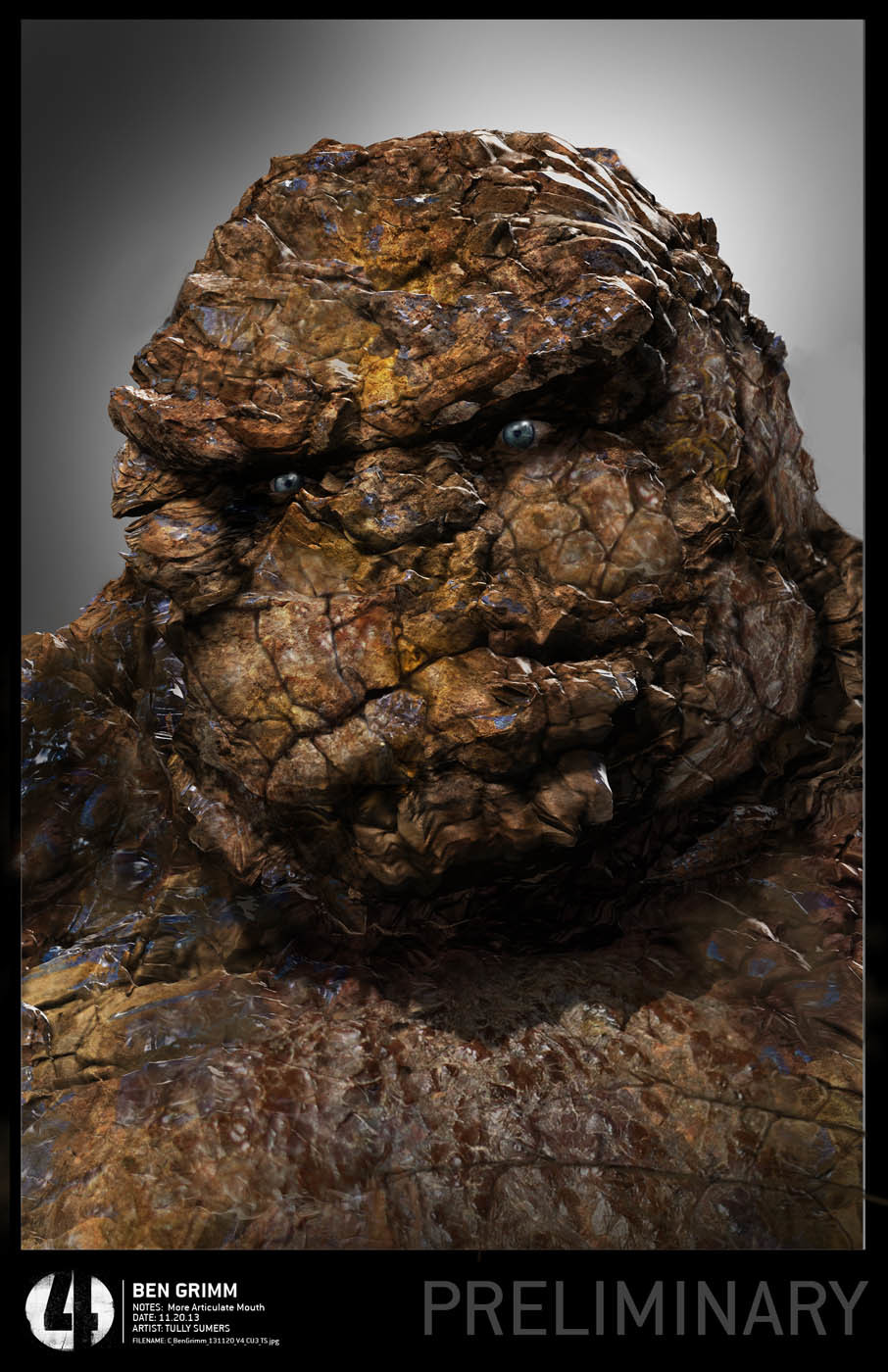 Heading down the CGI route with The Thing was the right move but he still didn’t really look that much like his comic book counterpart. This version, though, takes things down an even weirder route. 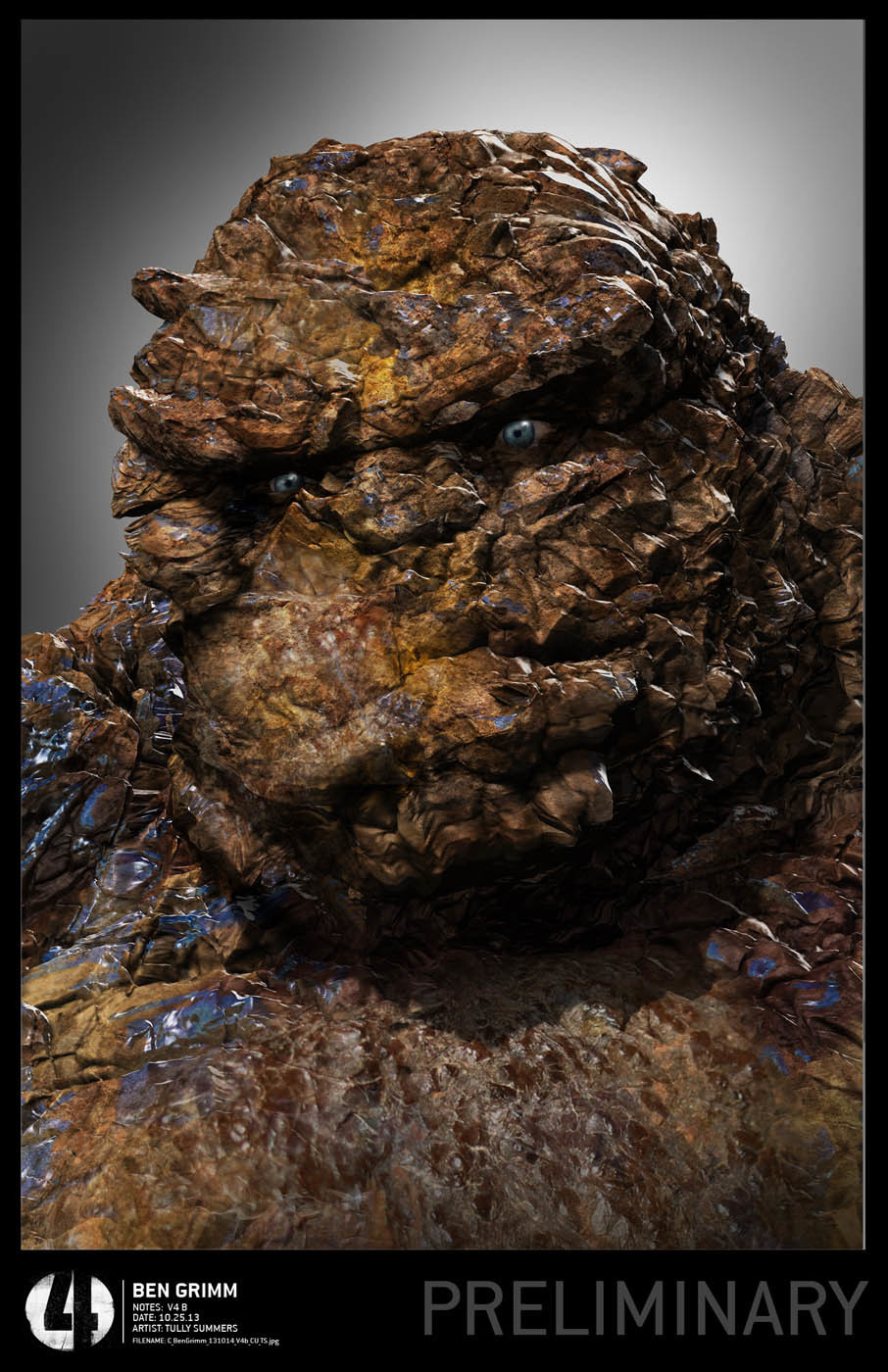 “This was the most extreme version,” adds Summers, revealing just how weird the character could have ended up looking on the big screen. “The intent was to make him barely functional, almost elephant man like.” 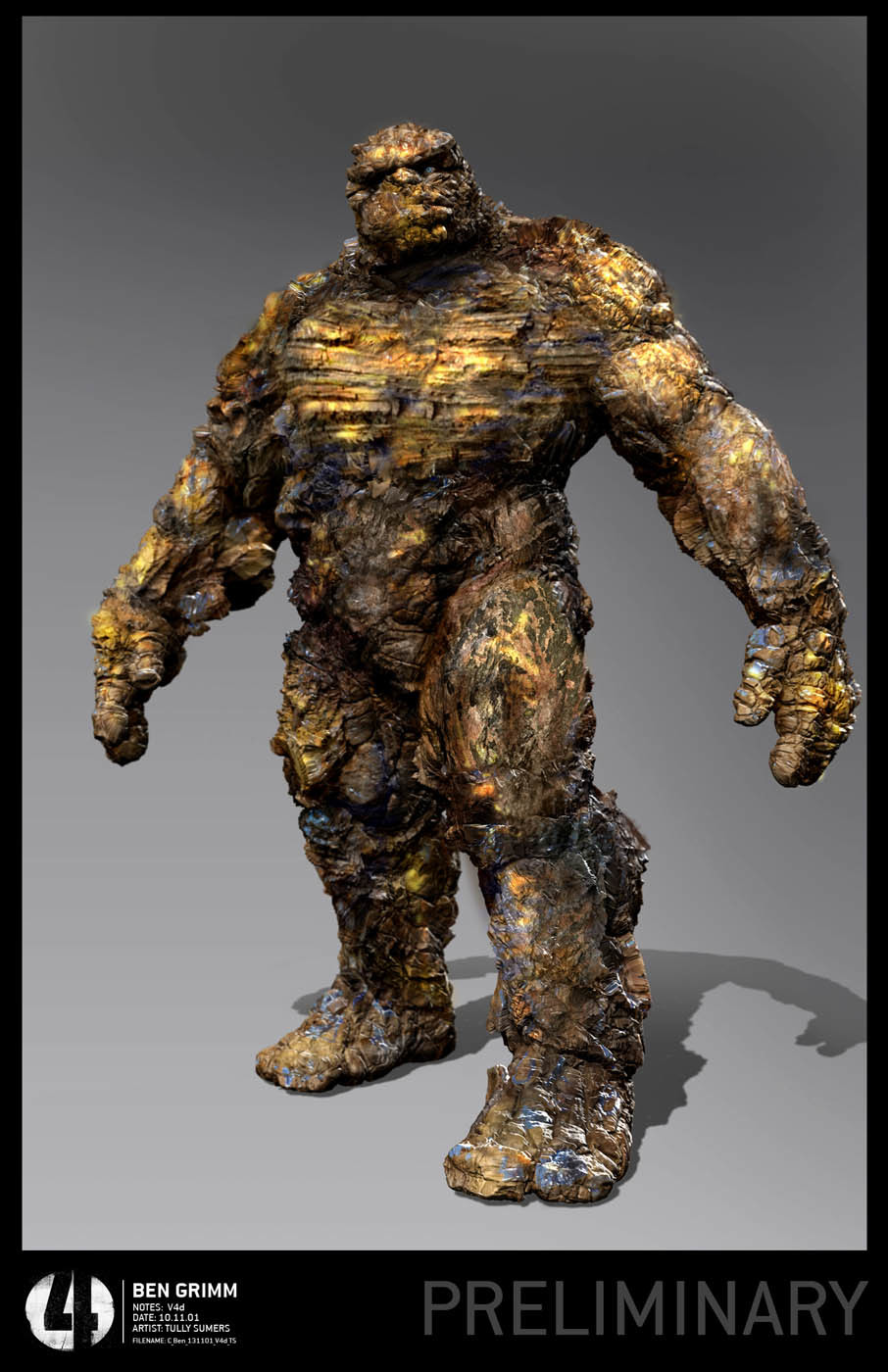 Having The Thing be restricted by his new rock-like body certainly would made for interesting viewing but he wouldn’t have been the fun loving version of the hero from the comics that fans love and might not have been that useful in a fight! 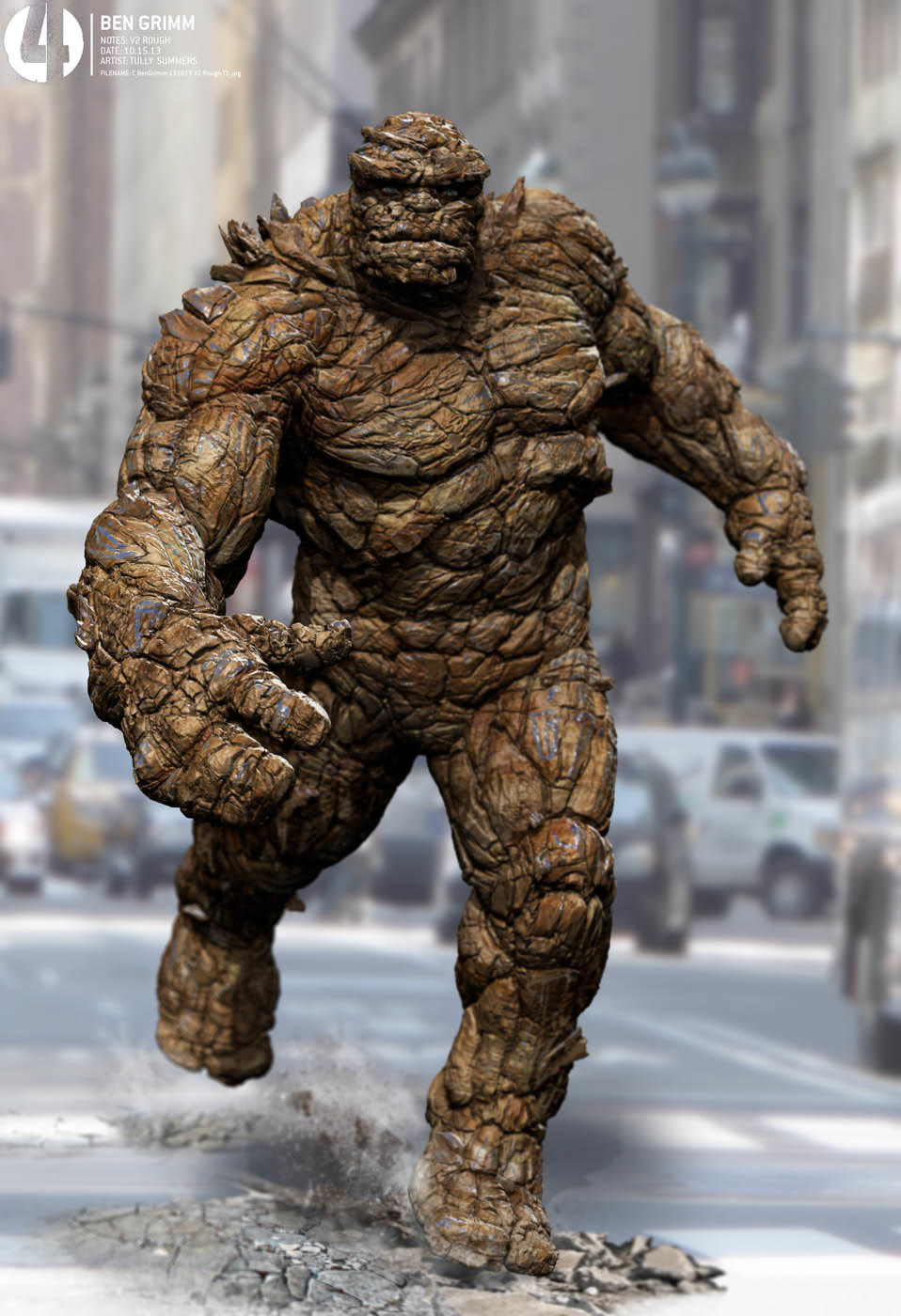 Now this is more like it! It’s much easier to see the comic book influences here and the face, in particular, feels like something that would have made fans happy (he even has his trademark blue eyes). 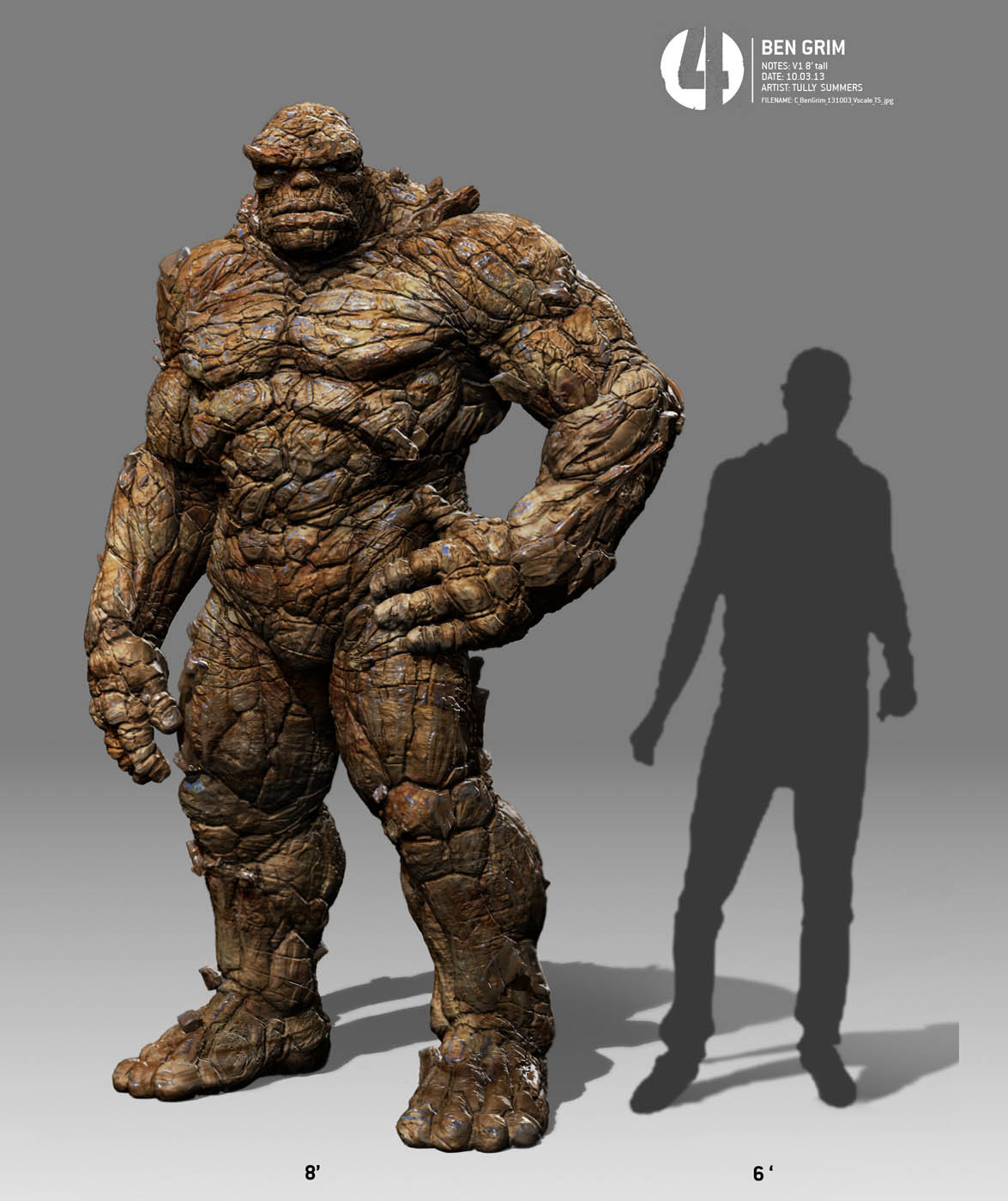 Why wasn’t this used? “This was too clean and did not have enough “affliction” to it,” the artist reveals. “[The] idea was Ben would start out almost incapacitated by his stone, and become more agile as they “carved away” at his body.”

Call us crazy but doesn’t it look like the invention on the left could be a very early version of H.E.R.B.I.E.? That would have been awesome to see and hopefully a concept that’s included in the MCU. 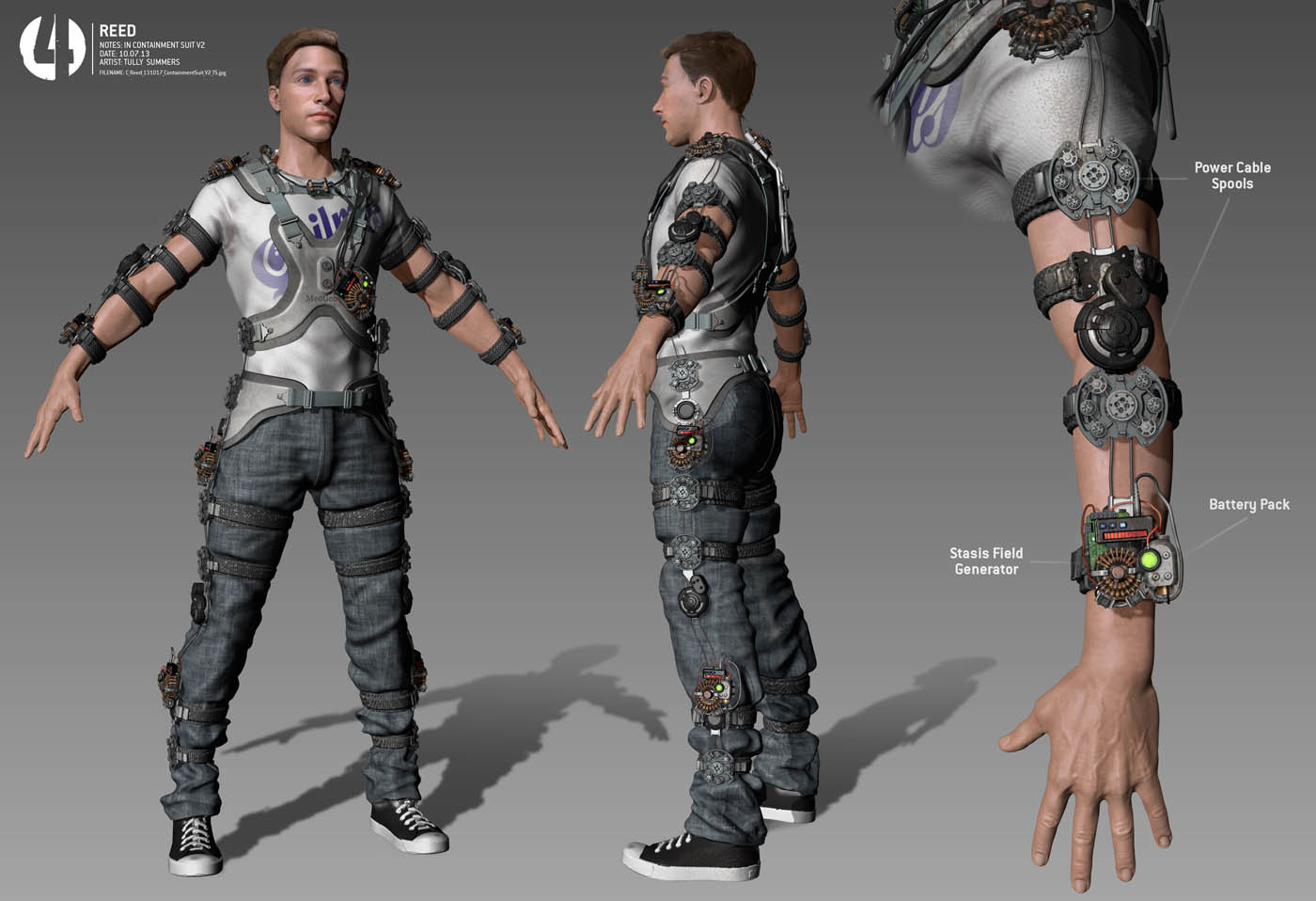 “Tracking with the idea that their powers at first were uncontrollable and almost disabling until the learned to control them, I came up with the idea that Reed would “fall apart” if he did not concentrate on specifically holding body parts in place,” Summers explains. “Here he has re purposed medical braces to contain him using home made stasis field generators.” 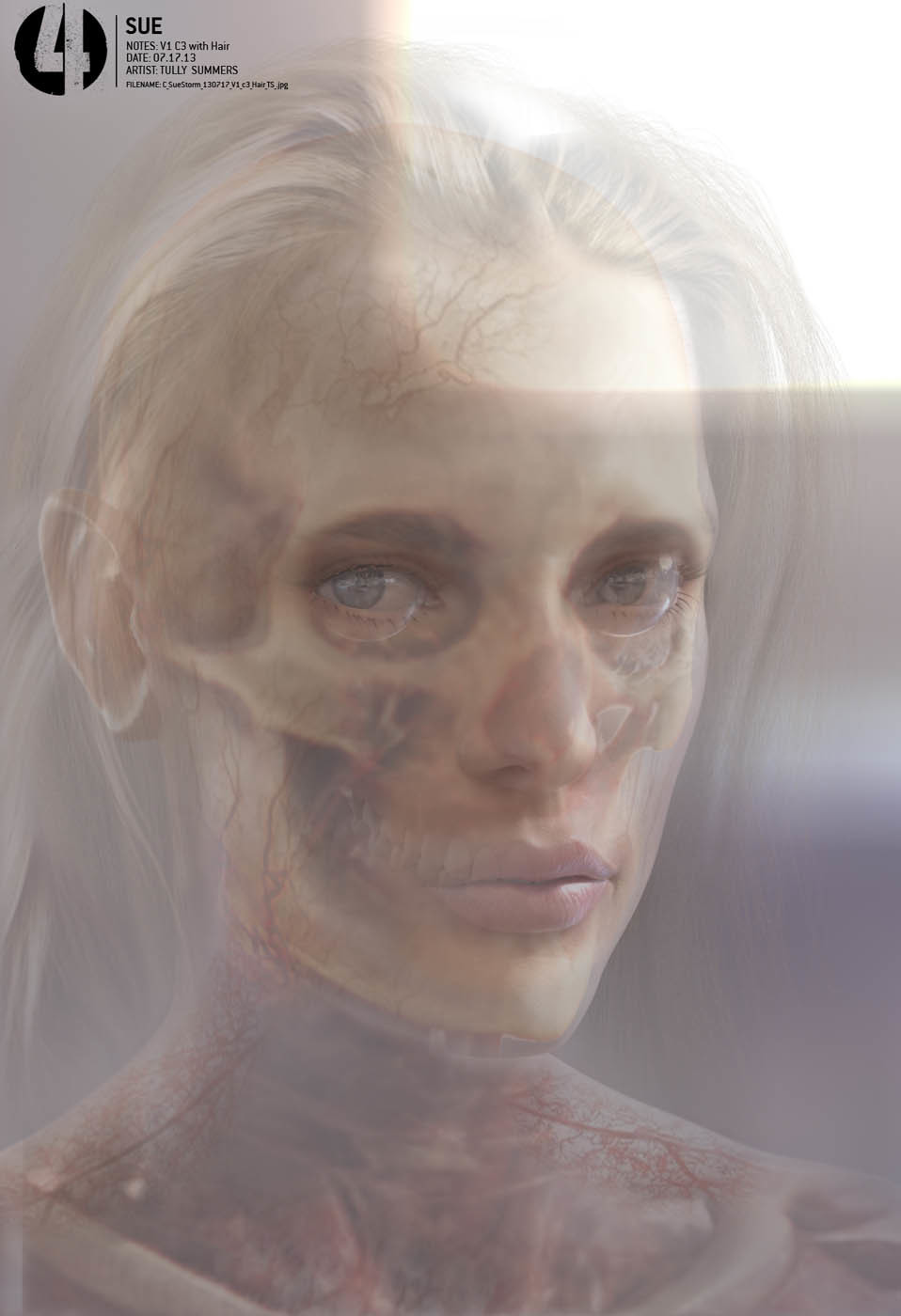 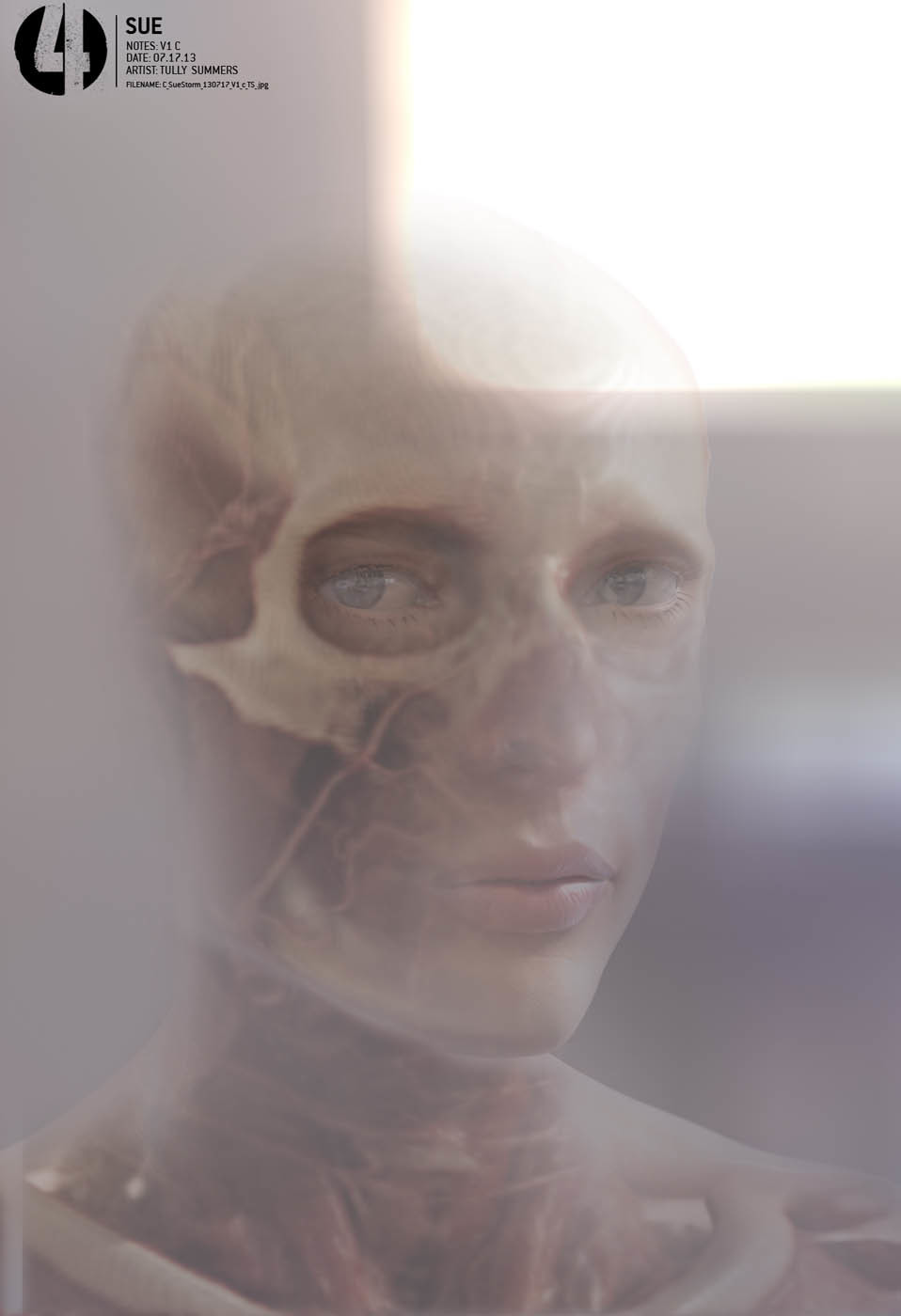 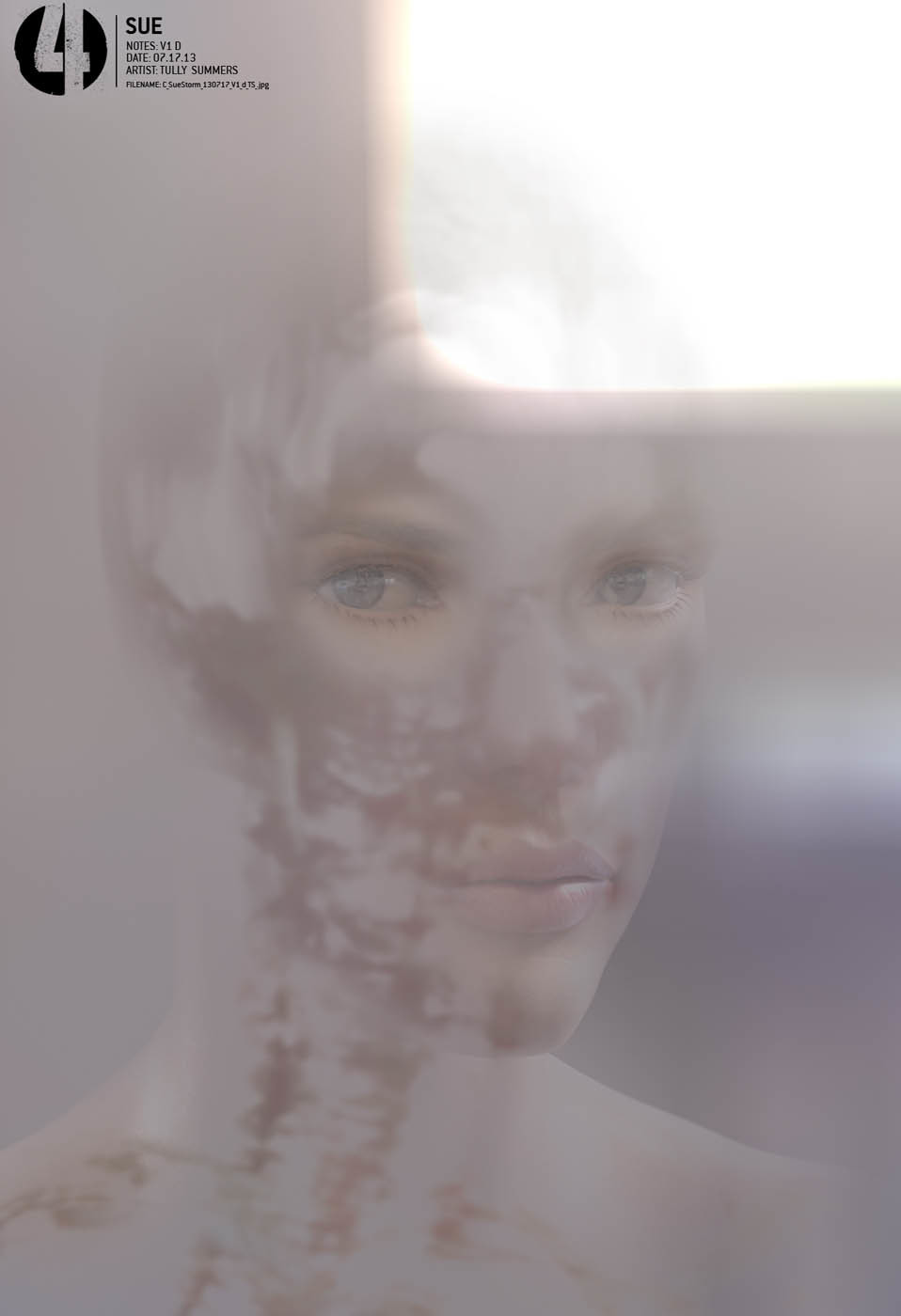 The artist’s thought process here was to explore “anatomical reveals” that moviegoers would see as the Invisible Woman faded away with the use of her newfound invisibility powers. 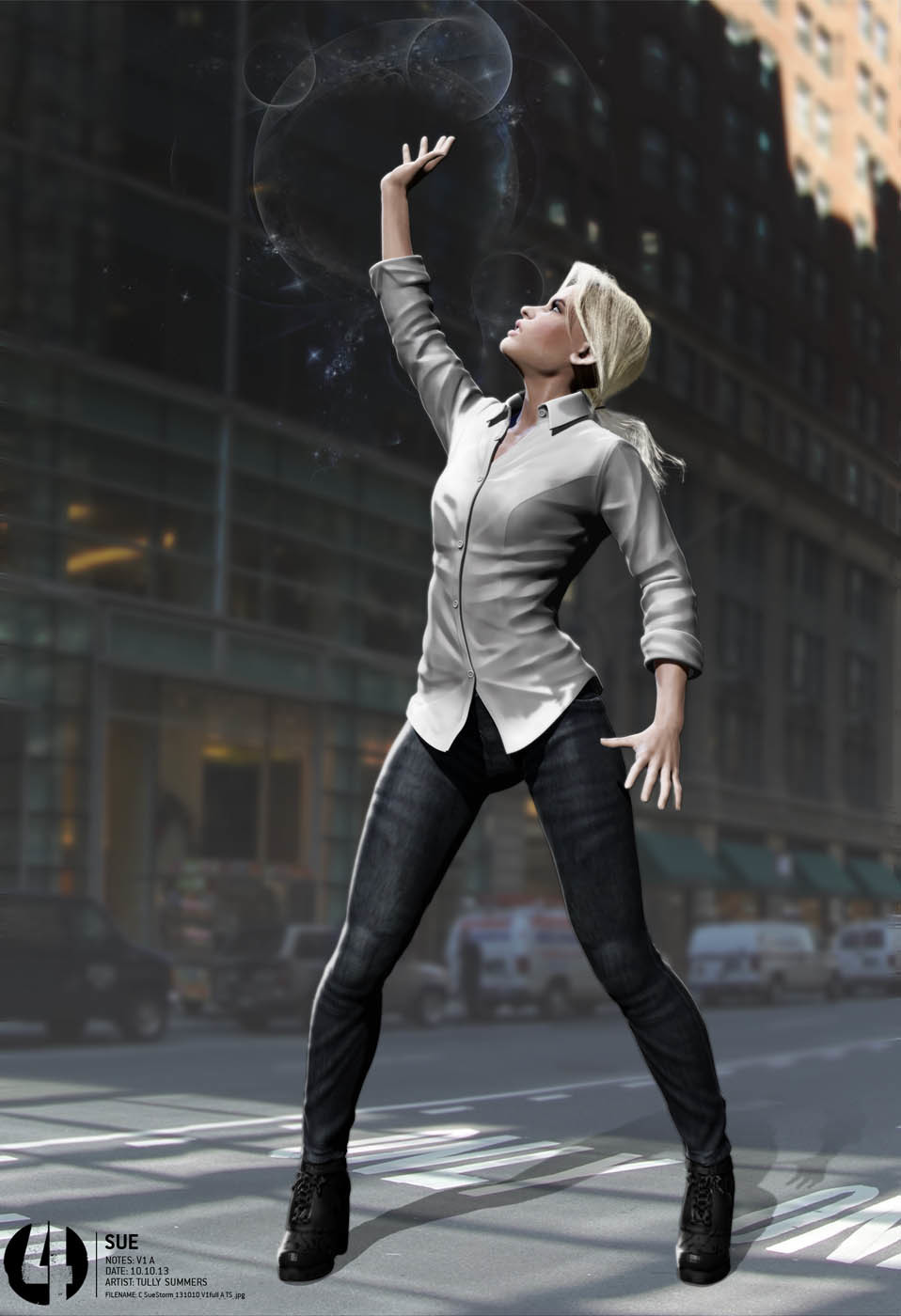 Summers says that he was “Exploring Sue’s shield generation” here and “Playing with the idea that she transfers her own physical particles to create her fields.” 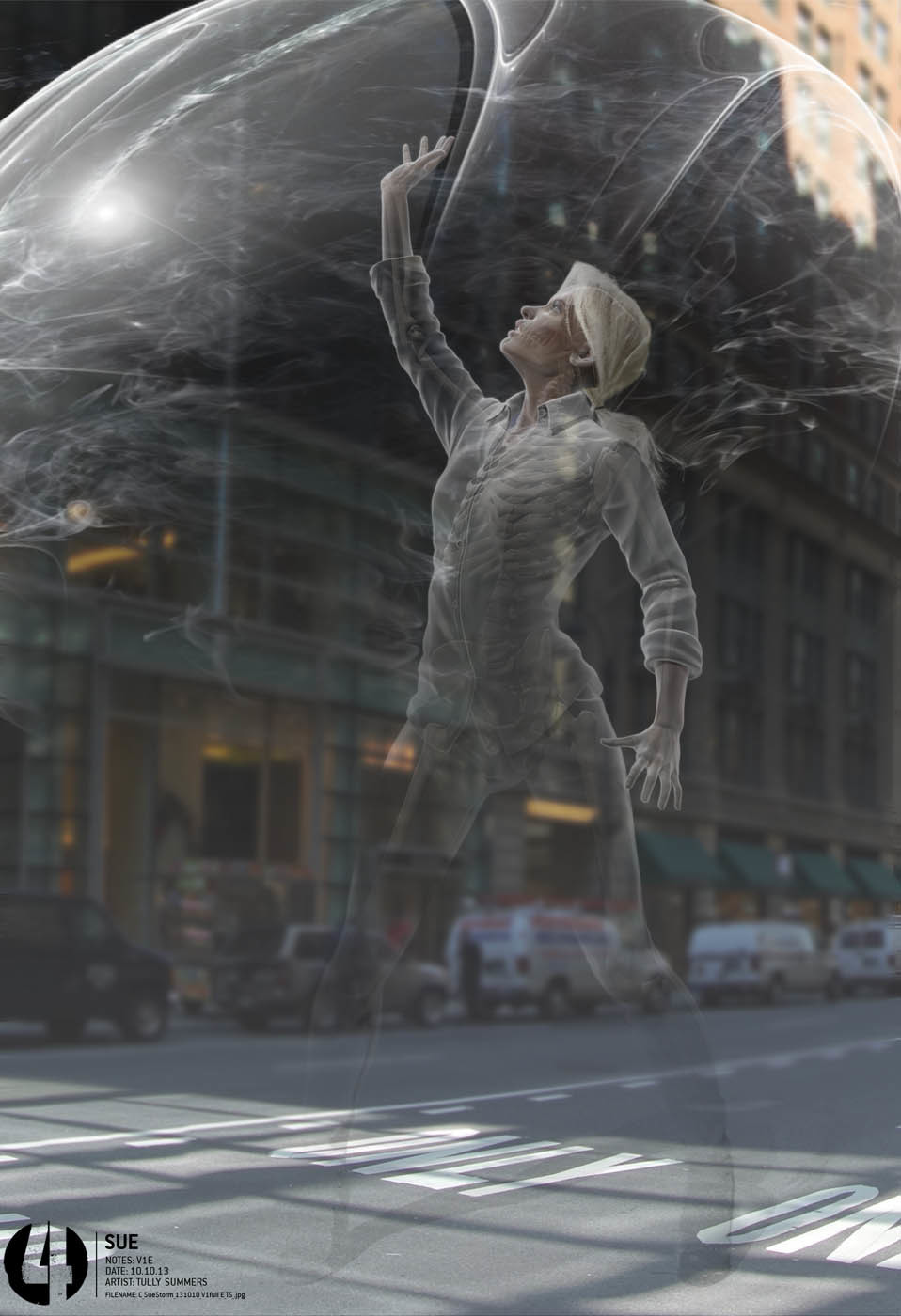 This makes for a really cool visual but it’s also one that’s a little creepy and not something it’s easy to imagine Marvel Studios including should they head down a similar route with the character. 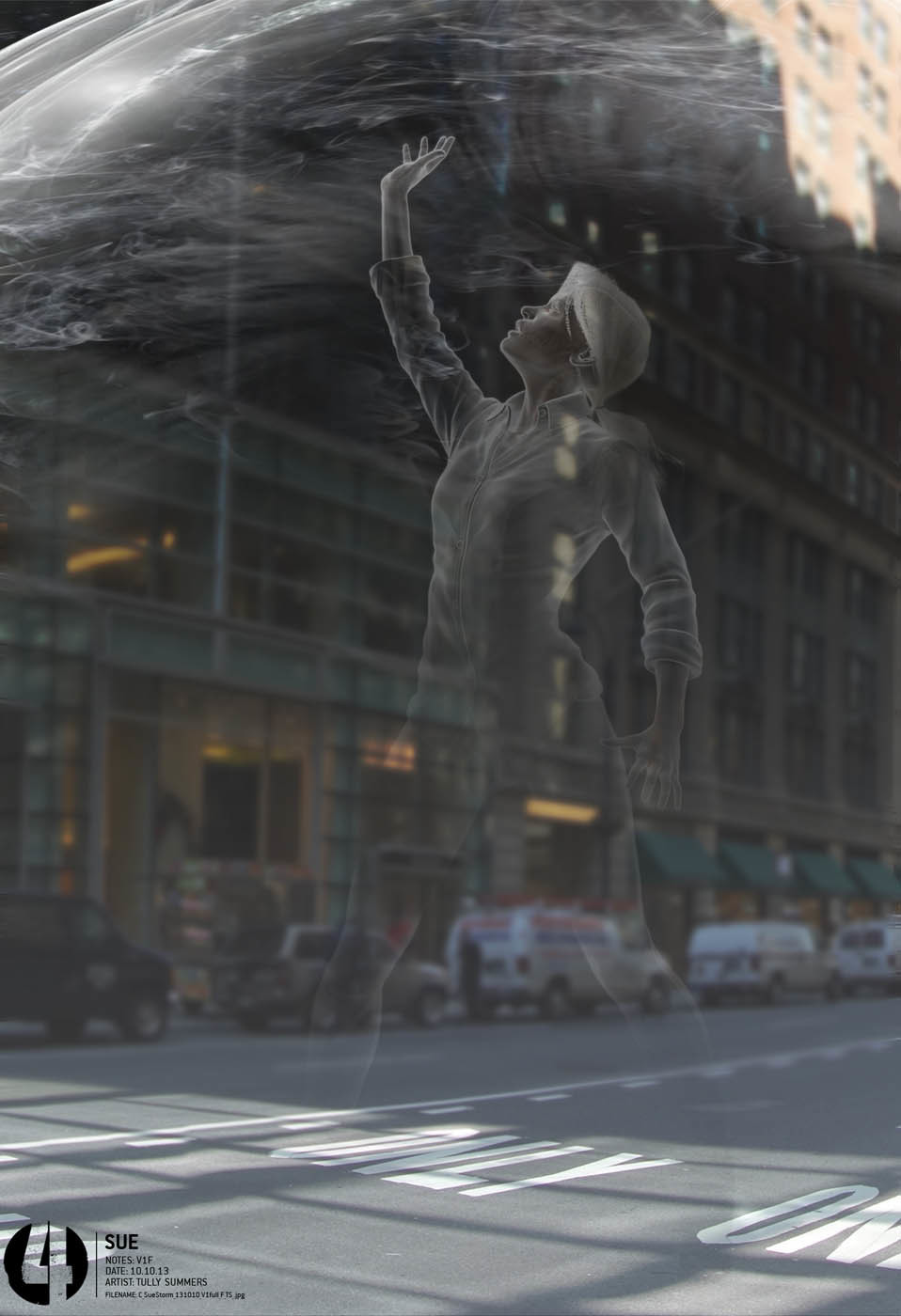 In the comics, Doctor Doom once revealed that Sue is actually the most powerful member of the Fantastic Four and that’s something which is evident from the way she’s using her powers here to create this force field. 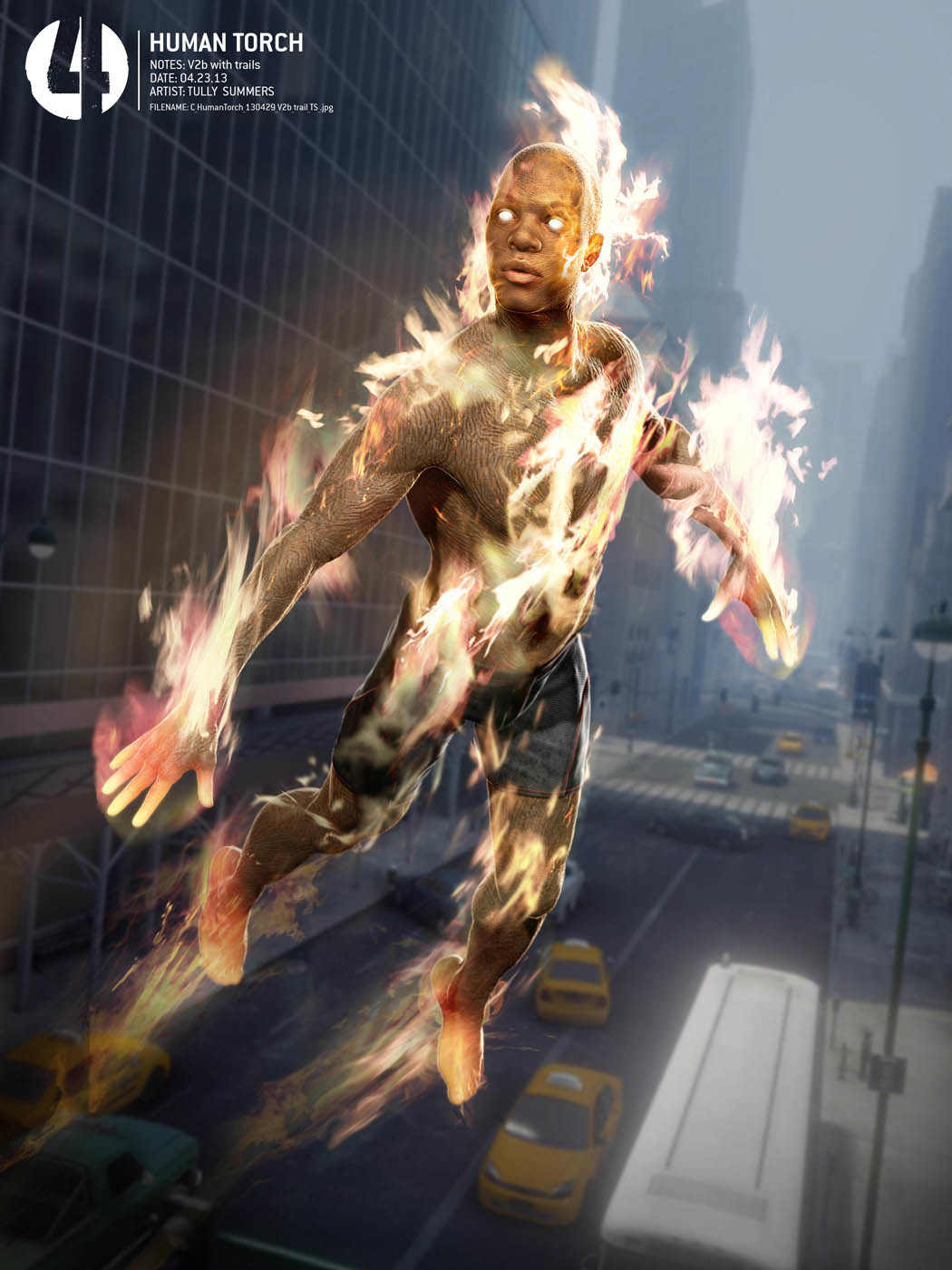 Another piece of artwork created to “address the “powers as affliction” concept,” it’s admirable that the movie tried to explore what it would be like to suddenly find yourself set ablaze! 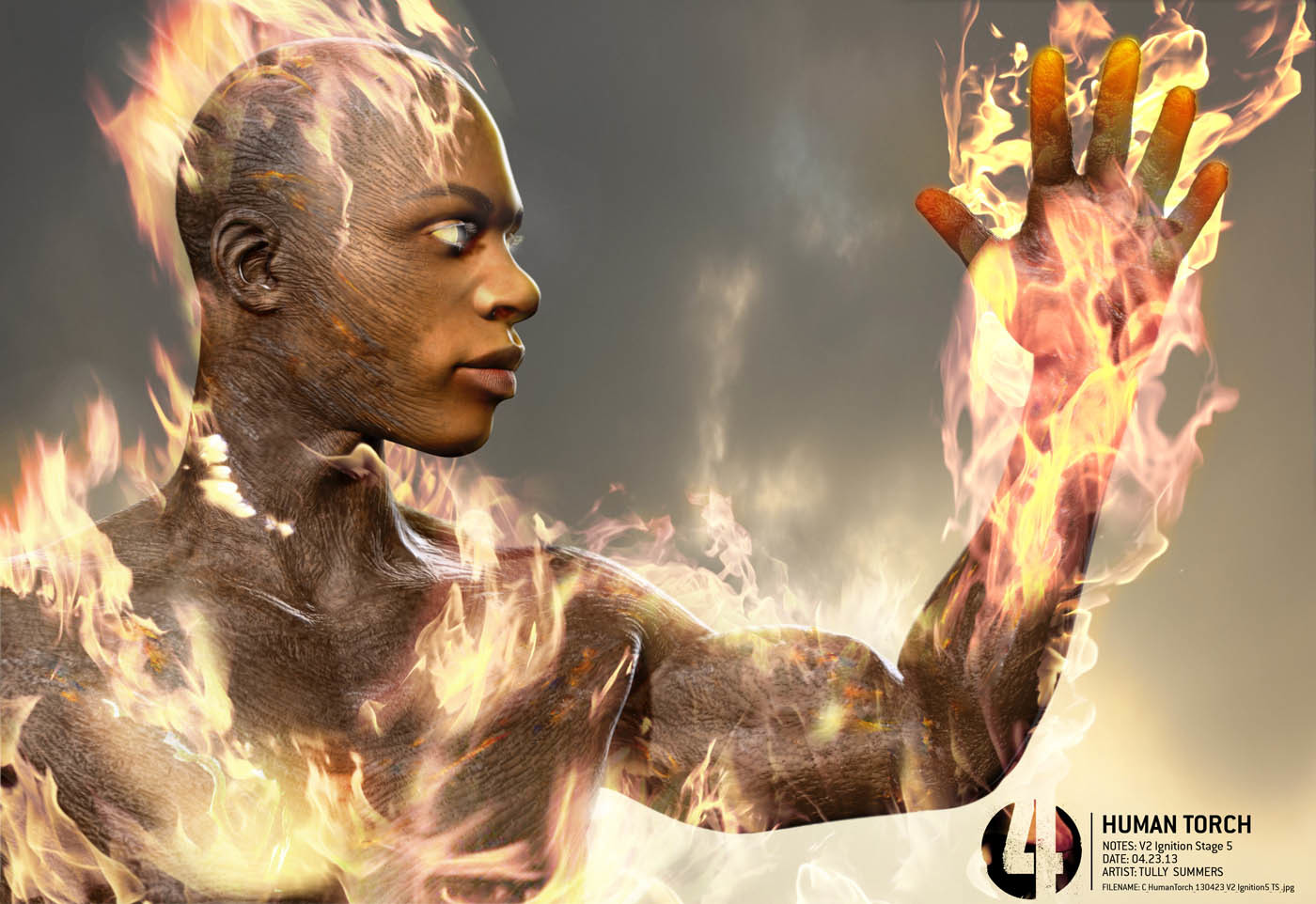 The freaky thing here is that it looks like Johnny’s skin is actually burning, something you have to believe would have fit in nicely with Trank’s initial vision that this movie would be a “body horror” movie. 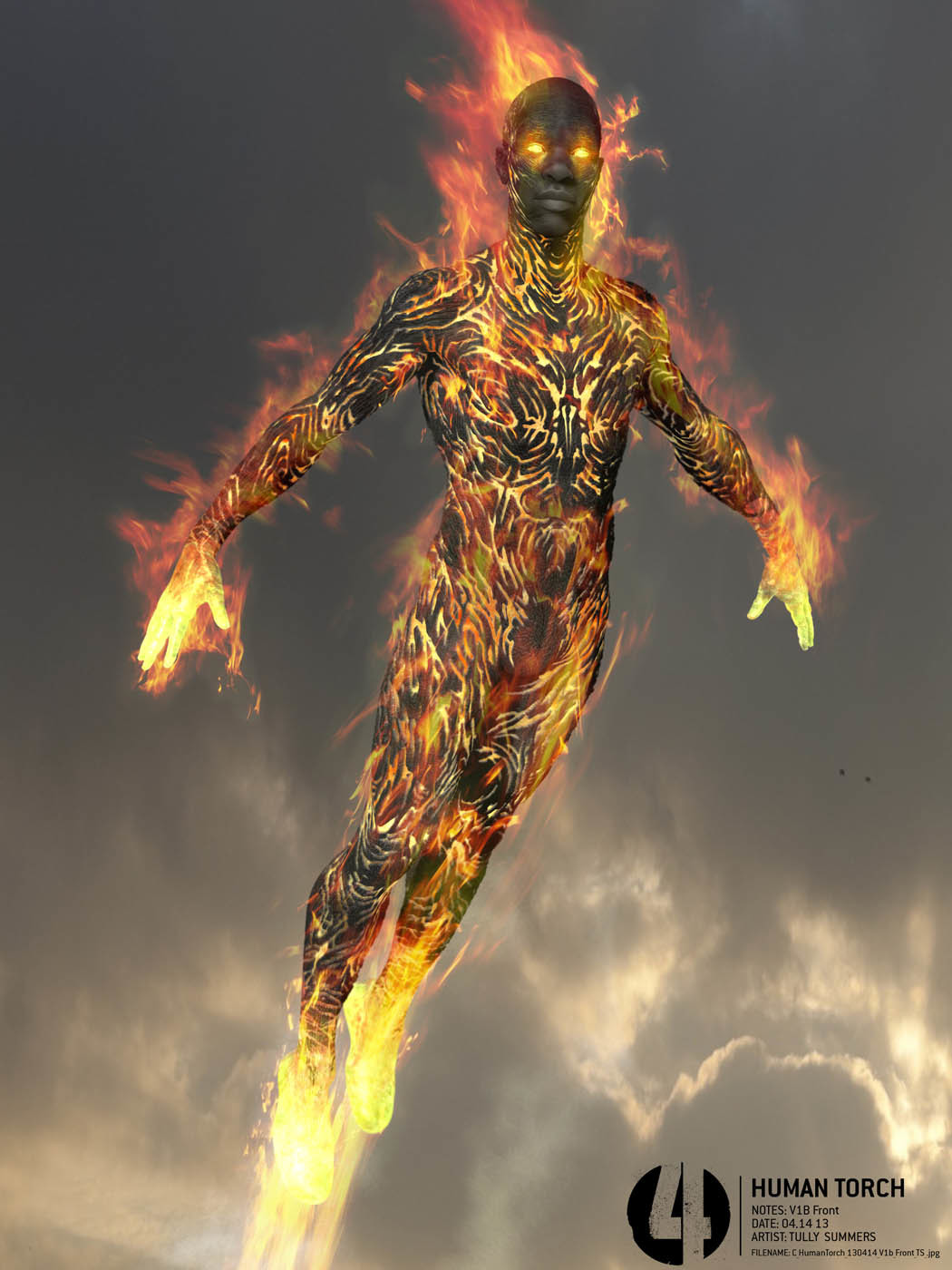 “This was my first take on the Human Torch before I knew Josh [Trank] wanted to take the team in a darker direction,” he says. “It was too confidently god-like, and did not have the element of powers as affliction he was shooting for.” 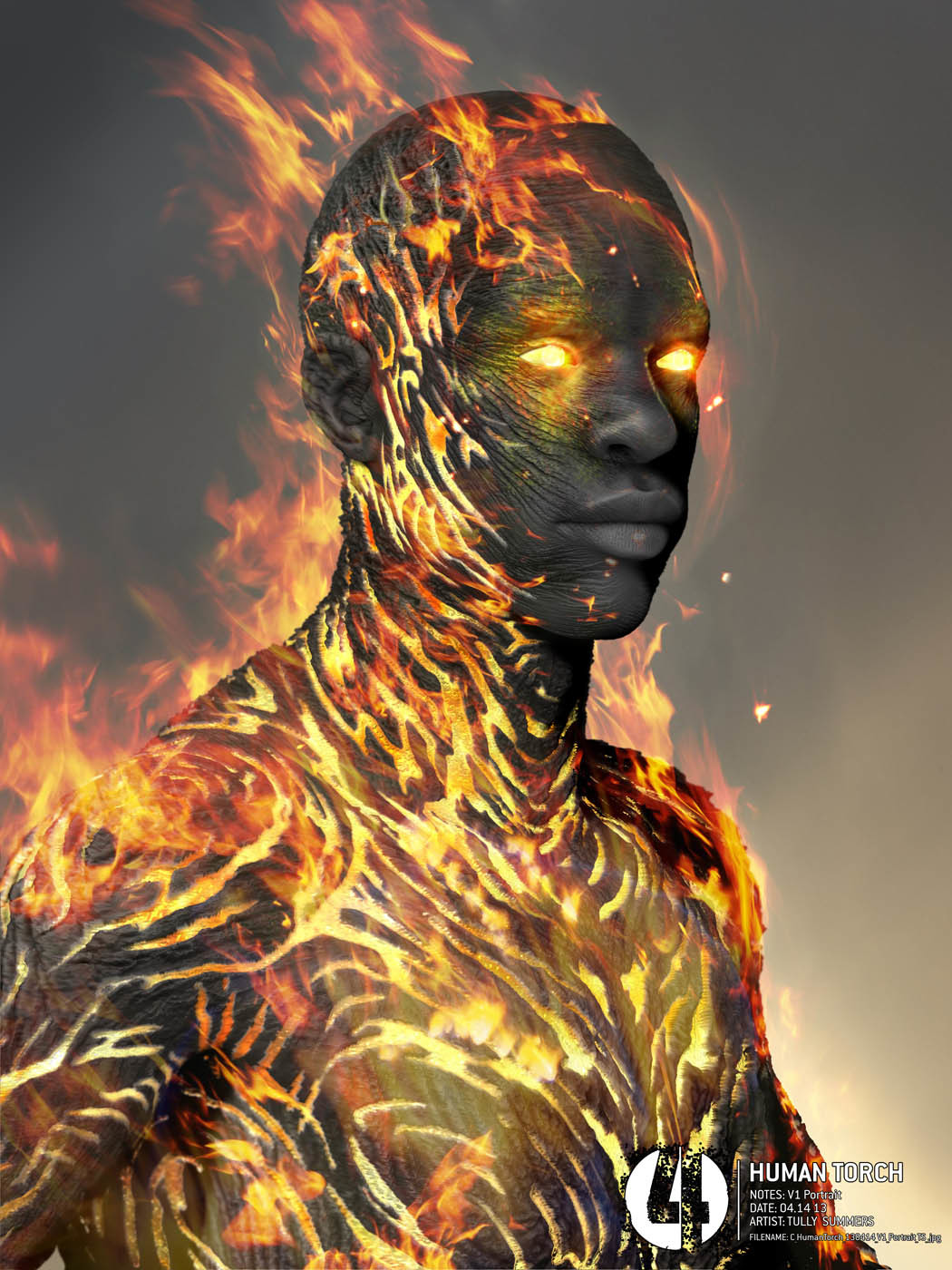 That’s certainly a unique idea for a character like the Human Torch but as Johnny Storm is very much human and his powers are based in science, it’s not hard to see why this one didn’t make the final cut. 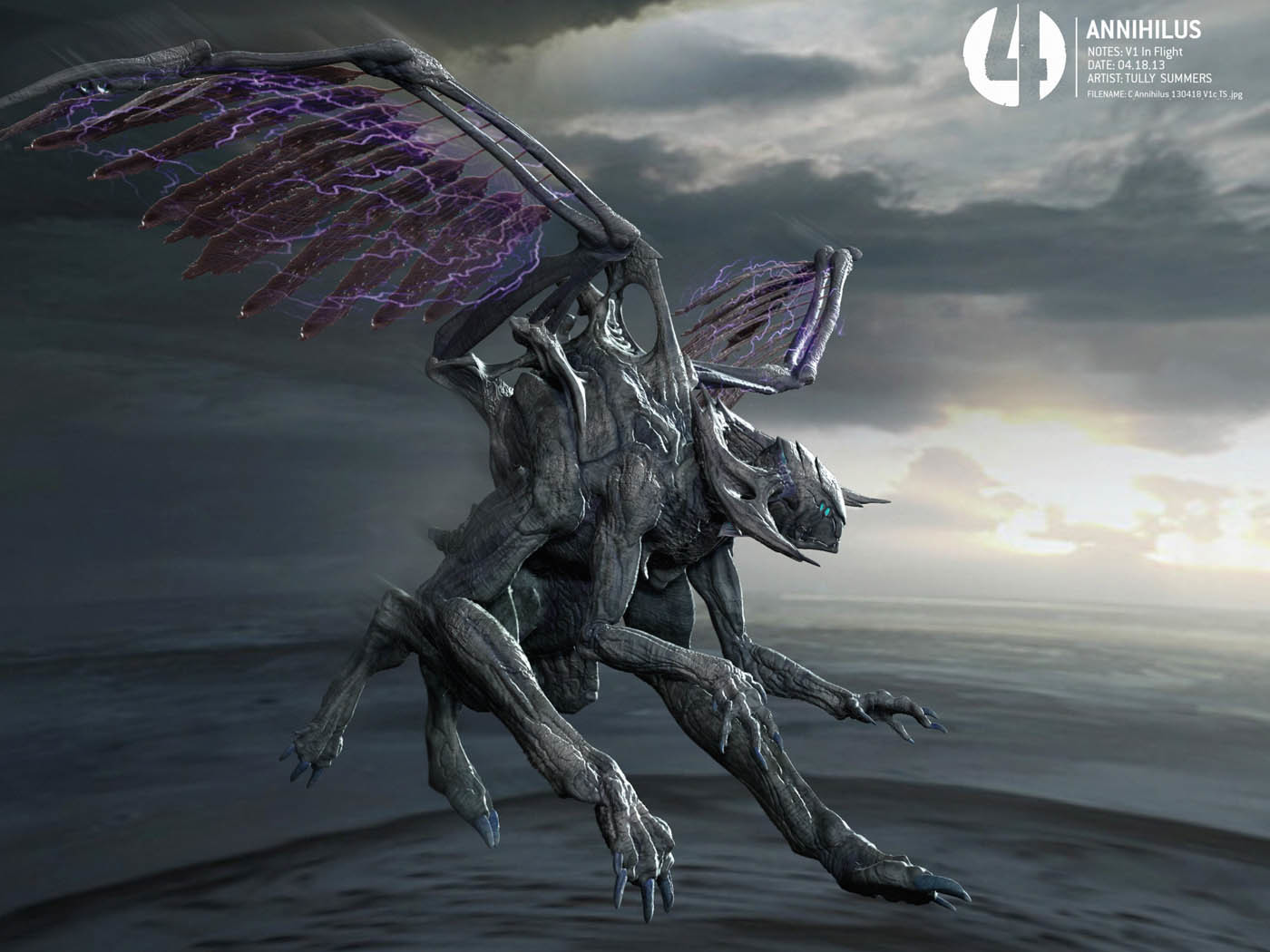 In an early script,” Summers reveals, “Annihilus, in this case an alien creature met on planet zero, is responsible for changing the Fantastic Four into what they are.”

That would have been awesome to see and while this monstrous “Lovecraftian version” looks terrifying, it might have been one step too far removed from the comic books for the liking of most fans. 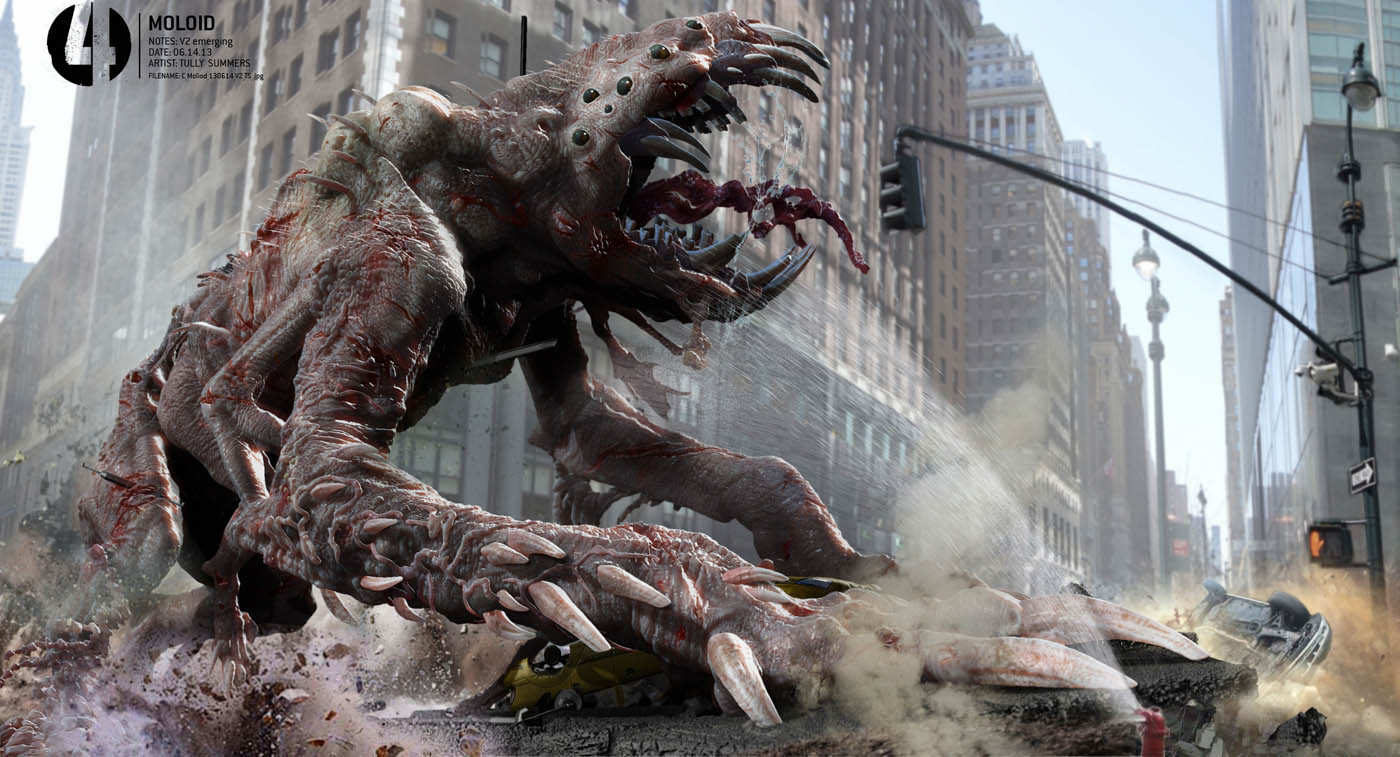 The artist worked on the movie fairly early on and says that “This poor fellow was a mutated abomination created by Baxter Labs” that had “escaped and [was] wreaking havoc in New York.” Alas, the Moloid was “Eventually written out.” 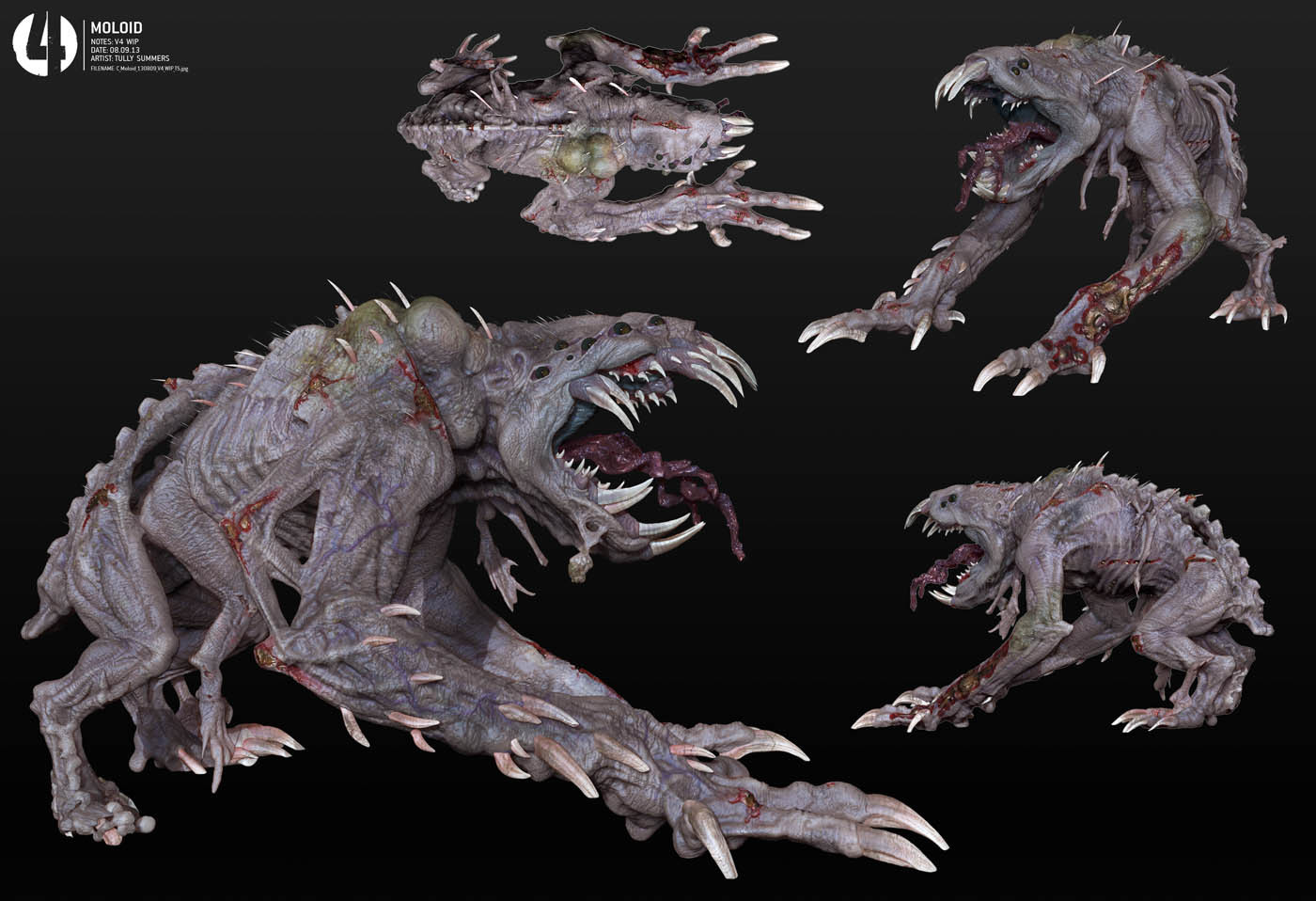 The appearance of a Moloid doesn’t mean that we would have necessarily seen Mole Man appear but it would have no doubt opened the door to a terrifying new take on that classic villain. 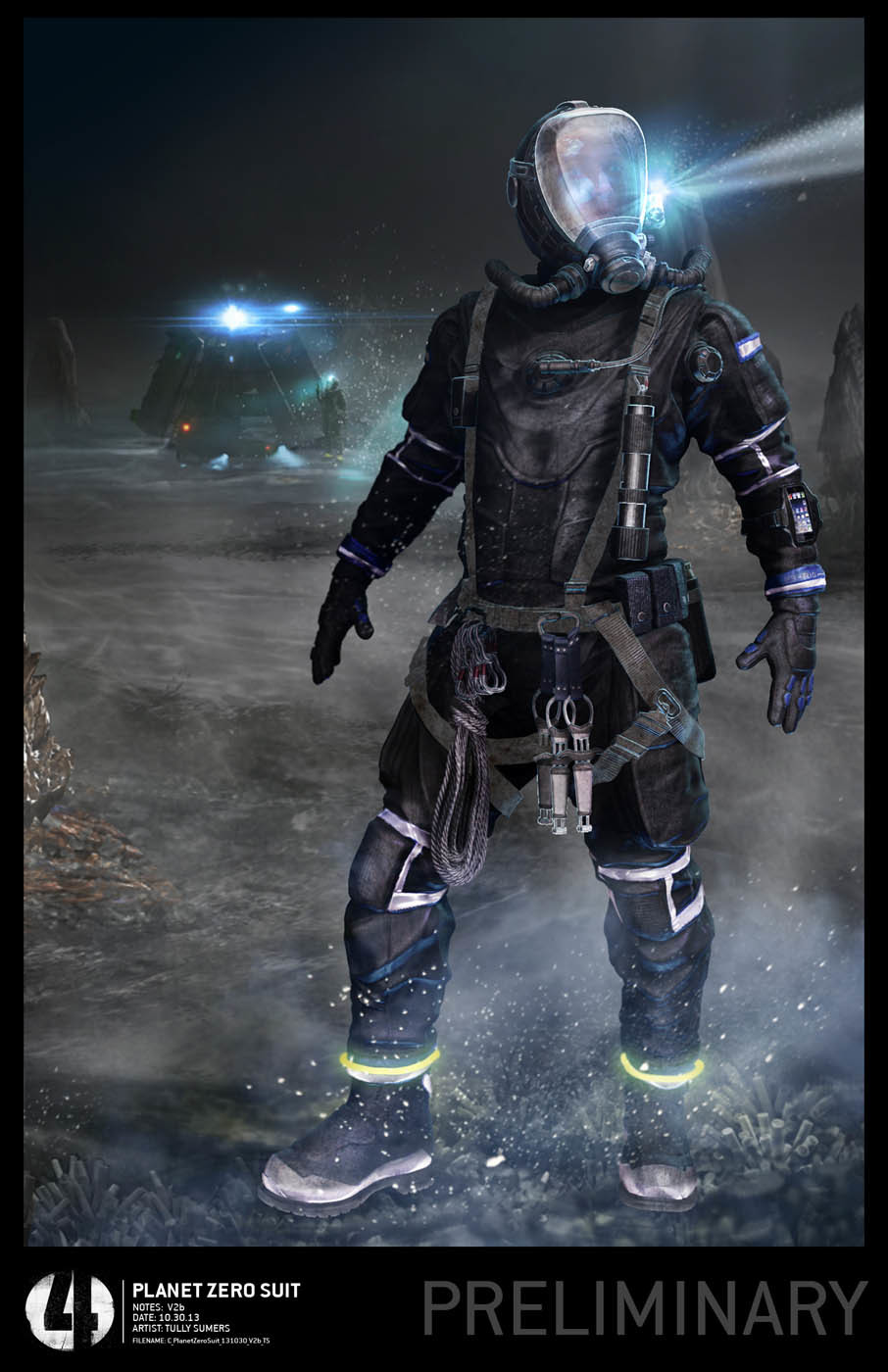 These containment suits for the team were “Meant to be an amalgamation of spelunking, diving, climbing and environmental suits to tackle what ever unknown conditions Planet Zero had.” 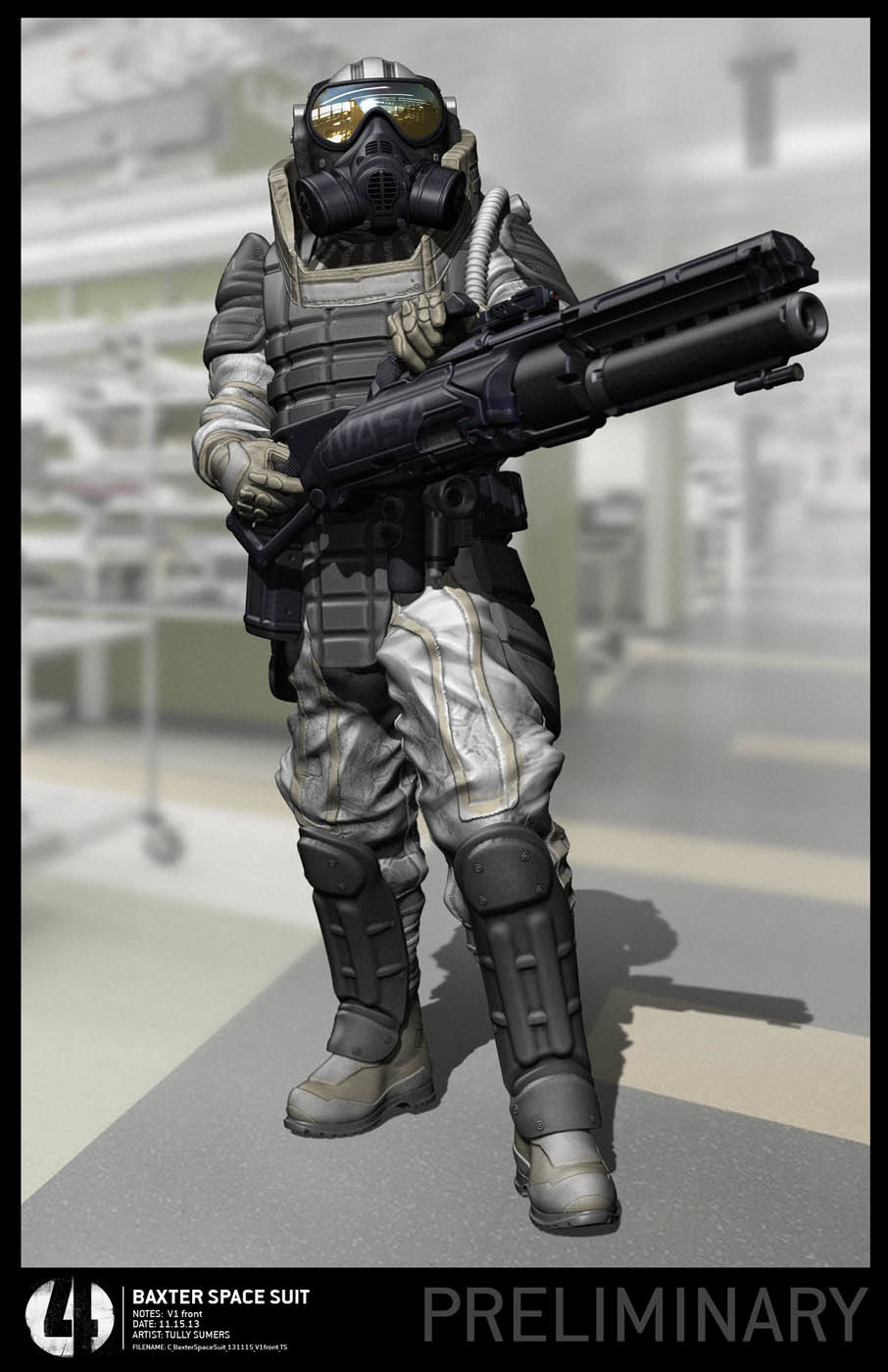 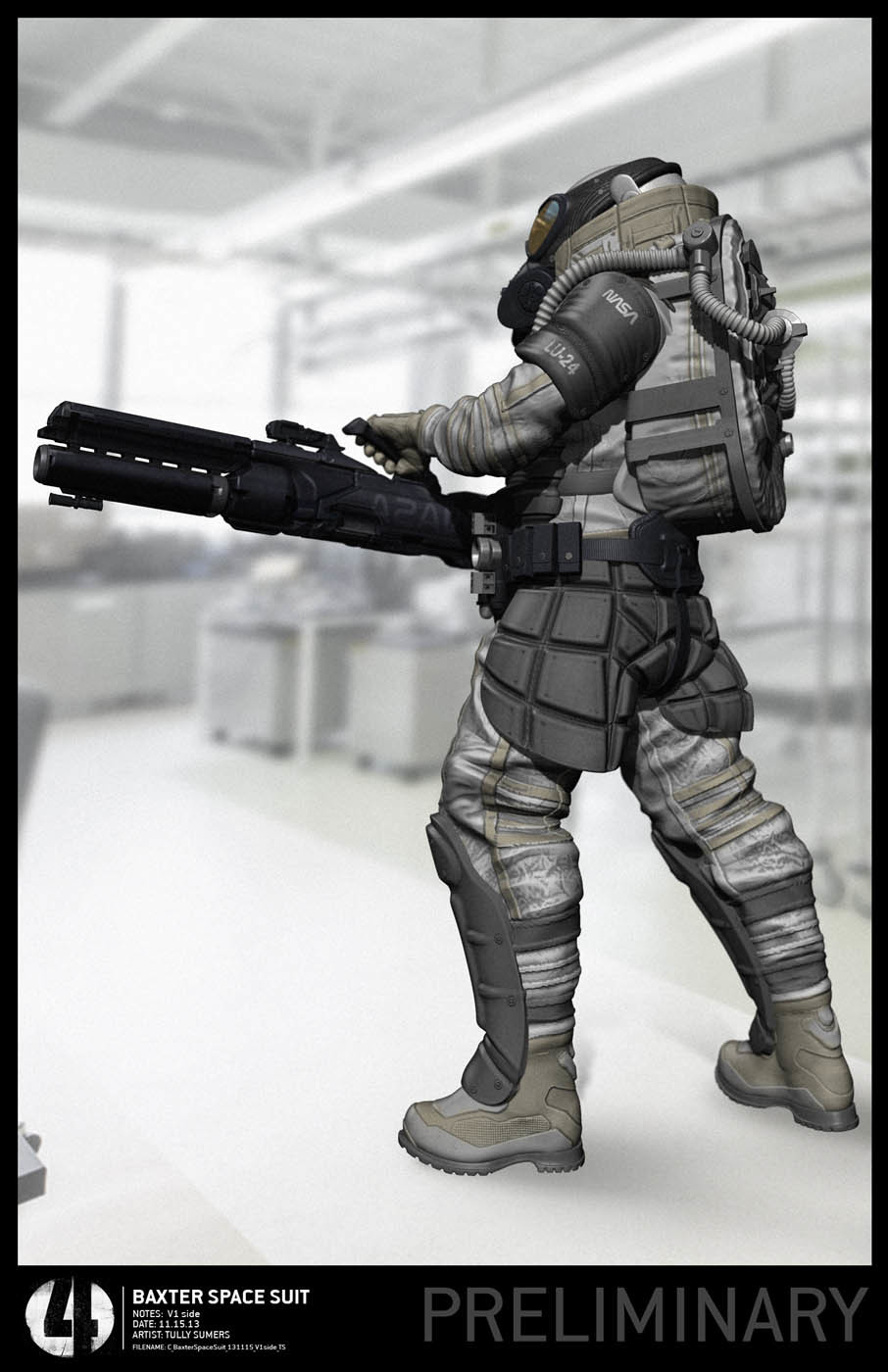 These were also written out of the movie as time progressed but were the Fantastic Four really mean to don these combat suits to head into the Negative Zone? That doesn’t seem like something Reed Richards would do…

Does that castle look familiar? Well, it should because “Victor has exerted his influence over the fungal biomass recreating facsimiles of his home country Latveria.”

Yes, in this version of the movie, Doom would have found a way to recreate Castle Doom while trapped on Planet Zero. Needless to say, that would have led to a very different take on Latveria.

However, it might also explain how a scientist like Victor would become the ruler of his own land and this creepy new take on Latveria could have been explored by Trank in a number of ways.

Planet Zero may have been called, well, “Planet Zero” in Fantastic Four but it’s basically just the Negative Zone from the comic books. Why the name was changed is hard to say. 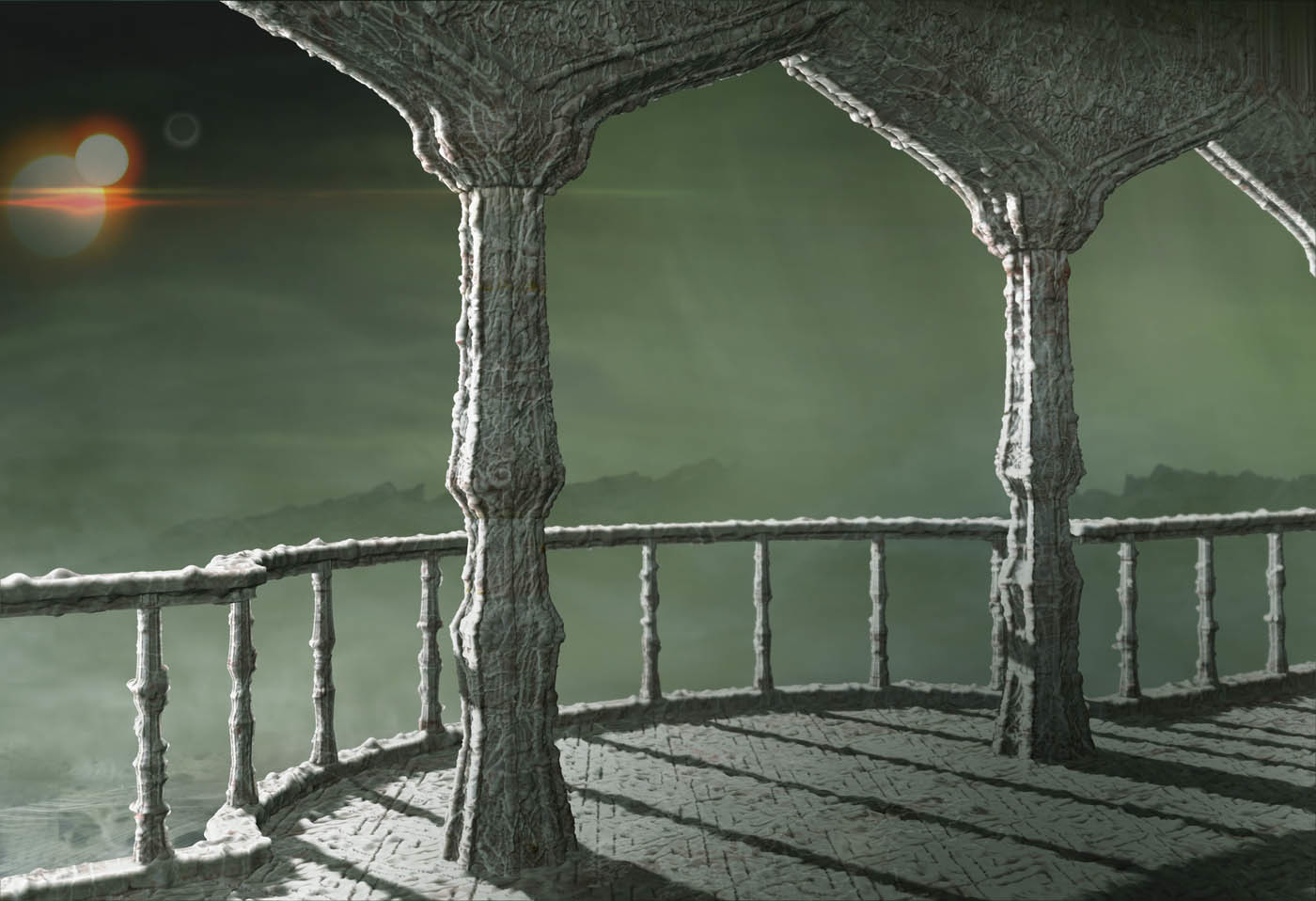 Looking at artwork like this, it’s easy to imagine Fantastic Four being a better movie once upon a time but it was doomed from the start (pun intended) due to Fox’s constant interference.

“These were studies hunting for a look for Planet Zero,” says Summers. “They were meant to be eerie, alien, and revolve around a dominant native fungal biology.”

Watching the Fantastic Four approach this terrifying version of Castle Doom and Latveria would have been awesome and a final act like this would have been so much more interesting than the generic fight executed in reshoots by Simon Kinberg. 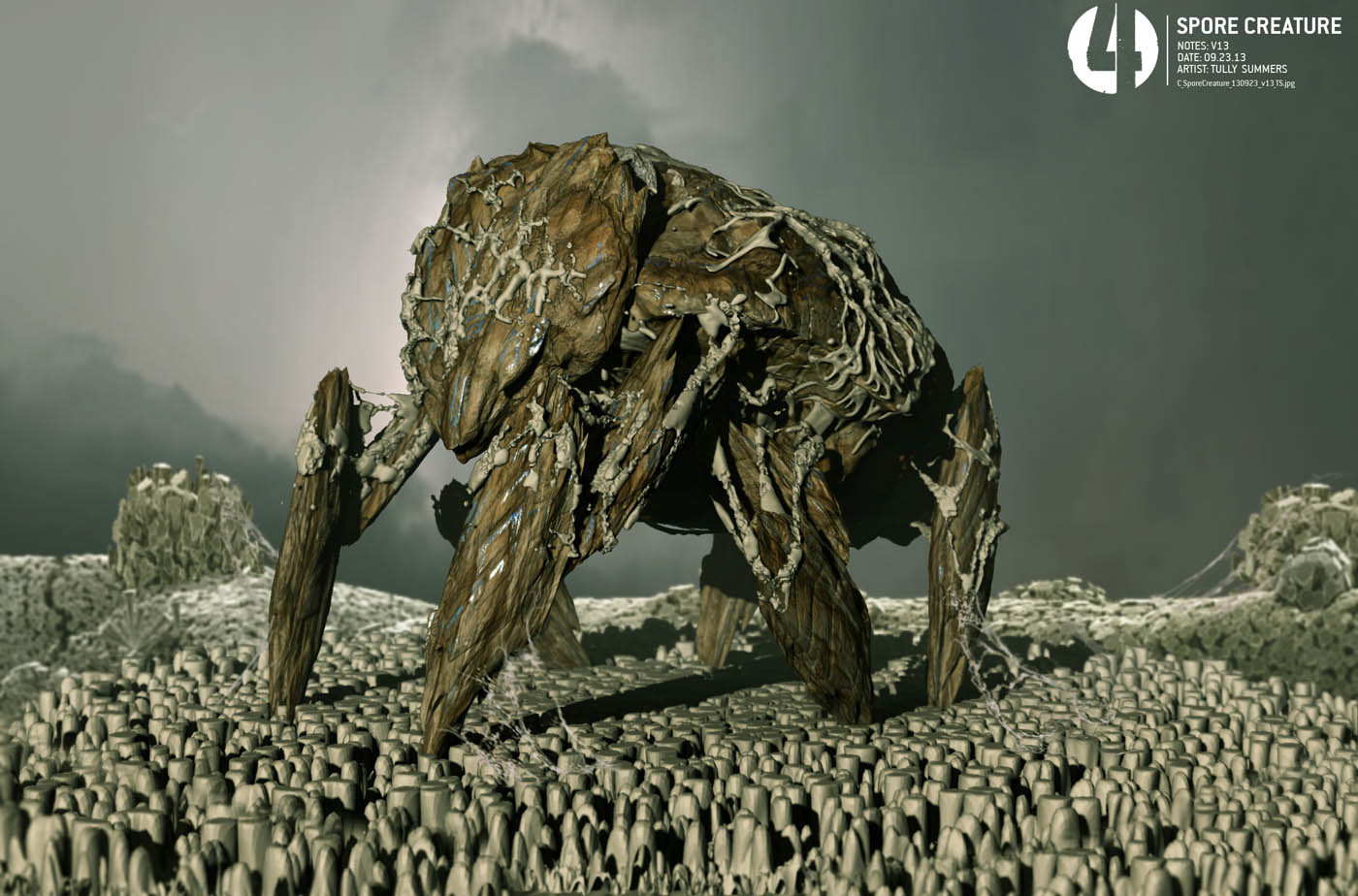 “This was my idea for the dominant fungal life form on planet zero,” the artist points out. “The rock is inanimate matter, but the pale slime mold on it’s surface is semi sentient, and can constrict like tendons to give the fungal colony locomotion.” 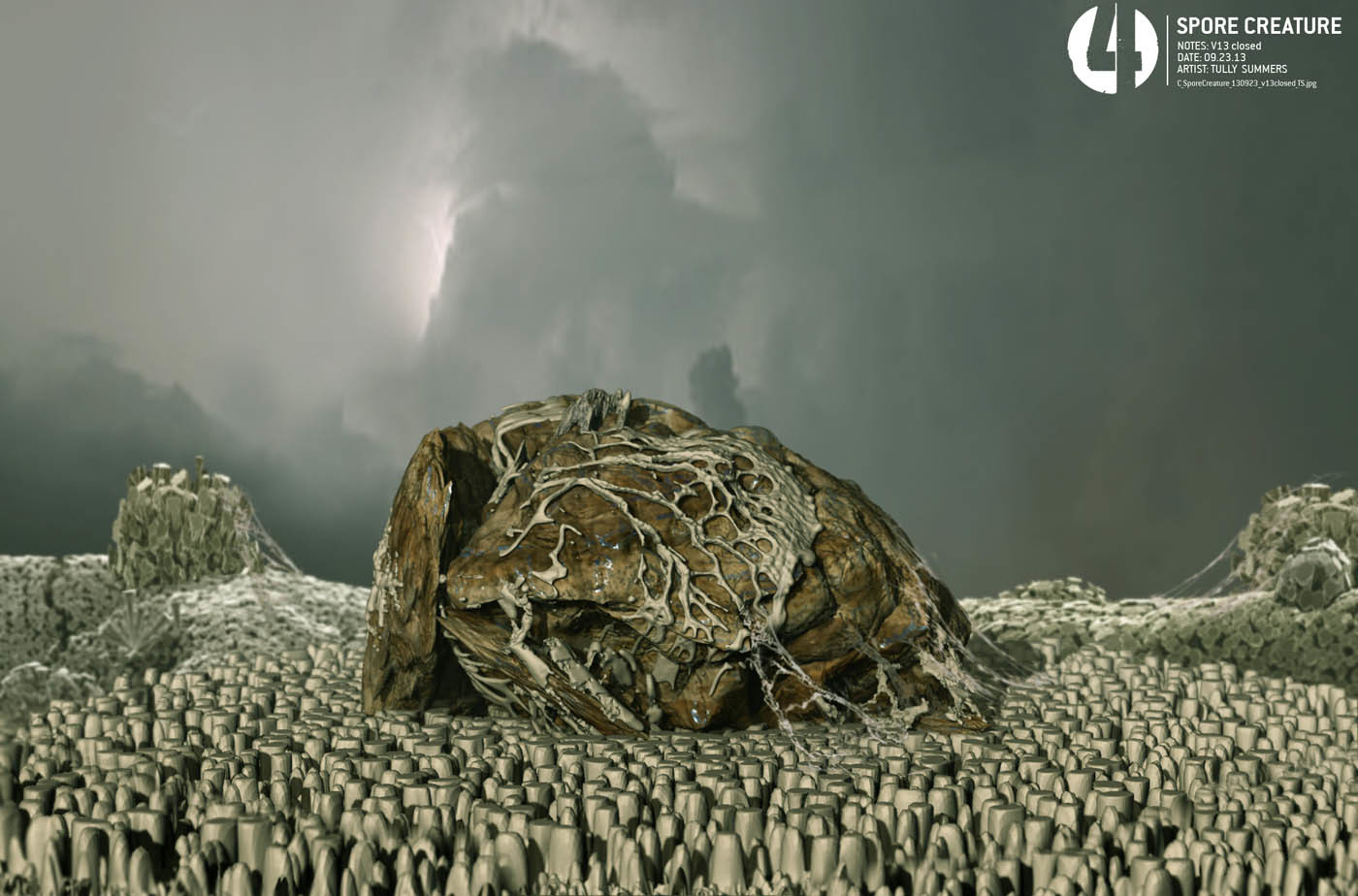 “These images are out of order as a thumbnail of a rock is not very exciting. But it’s meant to be a surprise reveal: walk past an innocuous rock, and then it get’s up and walks away. I did a rough animation as proof of concept,” he concludes.


Many thanks to Tully Summers for the concept art in this post – be sure to head over to his ArtStation page to see much more!