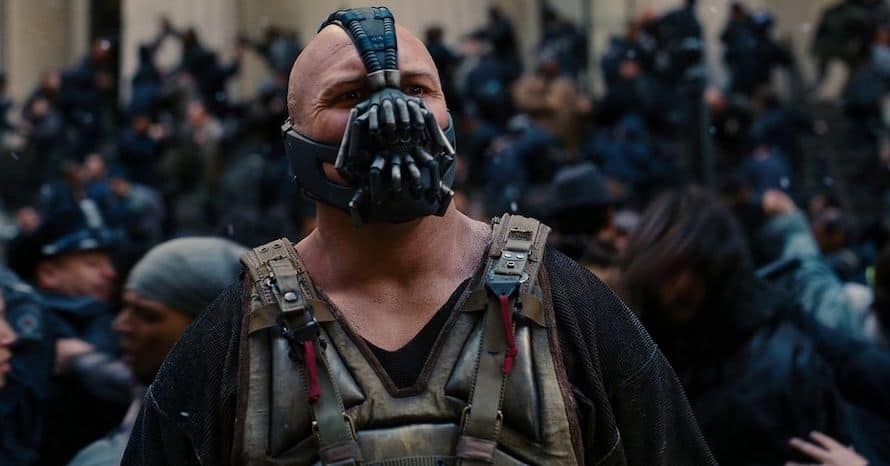 The Dark Knight Rises director Christopher Nolan defends Tom Hardy’s performance as Bane in the final film of the trilogy.

Although there’s a new Batman on the way in the future, Christopher Nolan recently looked back on his trilogy starring Christian Bale. The director appeared on the Happy Sad Confused podcast when he briefly addressed the criticism surrounding Tom Hardy as Bane in The Dark Knight Rises. Although it’s an incredible performance, many fans weren’t happy that the villain’s mask muffled Hardy’s voice in the film.

Christopher Nolan praised Tom Hardy and suggested that he doesn’t think his performance has truly been appreciated yet. The director also pointed out that a huge element in the portrayal comes from Hardy’s eyebrows. Nolan even compared the actor to Hollywood legend, Marlon Brando, explaining that the star managed to convey some “monstrous things” in The Dark Knight Rises. Take a look at Christopher Nolan praising Tom Hardy below.

“There’s no safety net for any of these guys and Tom, I mean… what he did with that character has yet to be fully appreciated. It’s an extraordinary performance, and truly amazing. The voice, the relationship between just seeing the eyes and the brow. We had all these discussions about the mask and what it would reveal and what it wouldn’t reveal, and one of the things I remember him saying to me, he sort of put his finger up to his temple and his eyebrow and said, ‘Can you give me this to play with? Let people see this.’ Sure enough, you see there in the film, this kind of Brando-esque brow, expressing all kinds of just monstrous things. It’s really quite a performance.”

What do you think about Tom Hardy as Bane in The Dark Knight Rises? Do you agree with Christopher Nolan? Sound-off in the comments below.

Here is the synopsis for The Dark Knight Rises:

Christopher Nolan returns to complete the Gotham trilogy that launched with Batman Begins and reached the stratosphere with the billion dollar blockbuster The Dark Knight. Inception’s Marion Cotillard and Joseph Gordon-Levitt join the cast regulars along with Anne Hathaway as Selina Kyle (aka Catwoman) and Tom Hardy as the powerful villain Bane. Christian Bale prowls the night as the Caped Crusader, fighting crime and corruption with the help of Michael Caine, Morgan Freeman and Gary Oldman.

The Dark Knight Rises is now available on 4K UHD, Blu-ray, DVD, and digital. Stay tuned to Heroic Hollywood for all the latest news surrounding Batman and subscribe to our YouTube channel for more video content in the future!