James Gunn explained why he is no longer interested in directing a Thunderbolts movie for Marvel.

The writer/director of the first two Guardians of the Galaxy movies and the upcoming DC Extended Universe film The Suicide Squad previously expressed interest in bringing a movie centered on the villain team known as the Thunderbolts to life. The team is often described as Marvel Comics’ own take on the Suicide Squad.

James Gunn, who is currently shooting the upcoming Peacemaker spinoff series for HBO Max, had another Instagram story Q&A with his followers. One follower asked him about his interest in directing a Thunderbolts movie for Marvel Studios after he completes his work on the long-awaited Guardians of the Galaxy Vol. 3. You can read James Gunn’s response down below: 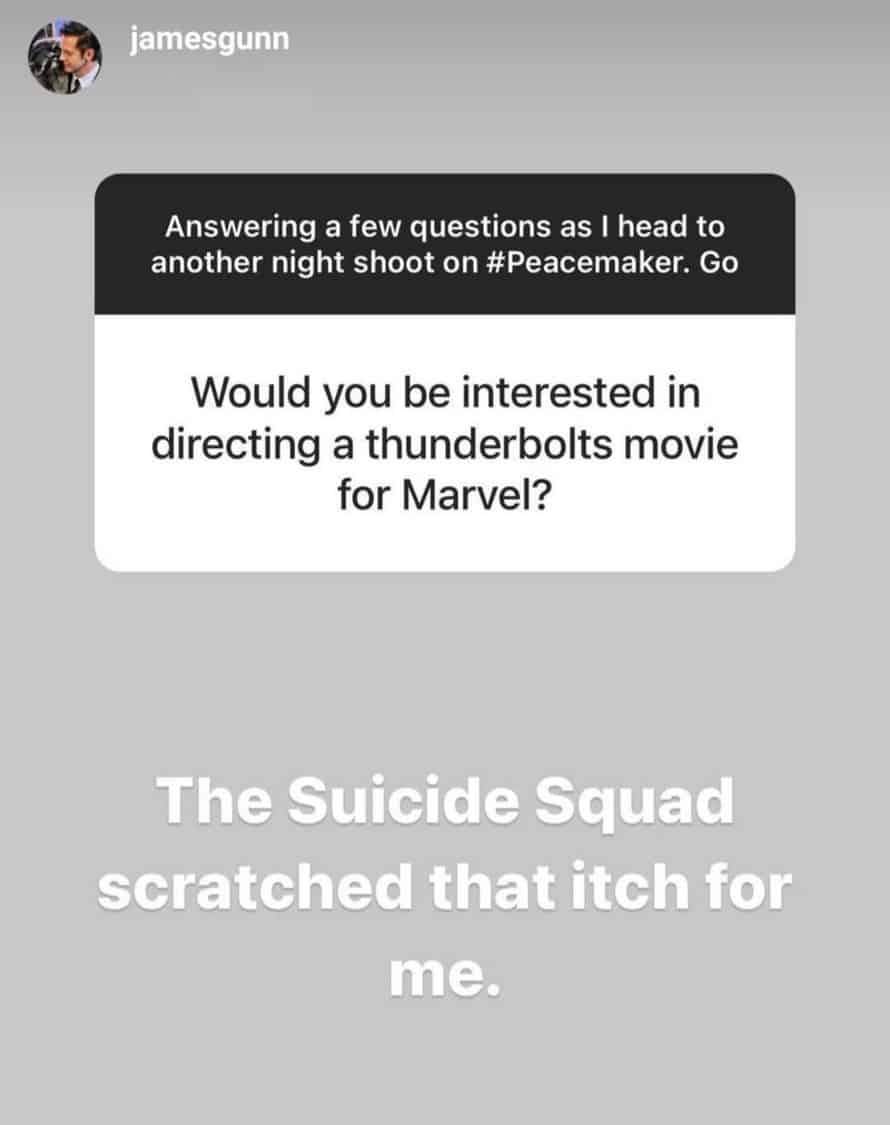 As mentioned above, Marvel’s Thunderbolts are a team of supervillains led by Baron Zemo. Although they originally started out with villainous intentions, the Thunderbolts eventually reformed and became a genuine group of superheroes, albeit with a rogue streak. Given that the team is often compared to the Suicide Squad, it’s no surprise that James Gunn seems to have had that desire to write/direct such a film fulfilled with this new DCEU project.

James Gunn remains one of the busiest people in superhero movie filmmaking. He just completed work on The Suicide Squad and is currently shooting episodes for the Peacemaker series starring John Cena. He will then return to Marvel Studios to film Guardians of the Galaxy Vol. 3 and The Guardians of the Galaxy: Holiday Special, the latter of which will stream exclusively on Disney+.

Here is the synopsis for James Gunn’s new film, The Suicide Squad:

The Suicide Squad is currently scheduled to hit theaters and HBO Max on August 6, 2021. Continue to follow Heroic Hollywood for all the latest news on James Gunn and his upcoming projects and make sure to subscribe to our YouTube channel for more content!