According to Clint Barton himself, Jeremy Renner, the Hawkeye series for Disney Plus has finally wrapped production.

Although we’ve seen a few photos from the Hawkeye set over the last few months, including a look at Hailee Steinfeld’s Kate Bishop costume, details about the series have been relatively sparse. We know that Kate and Clint will team up to fight something, but it’s not yet clear what they’ll be up against. Hopefully we won’t have to wait too long to find out, since Jeremy Renner recently confirmed that filming has wrapped on the upcoming Disney Plus series.

Jeremy Renner took to Instagram to confirm that filming had finished on Hawkeye, explaining that it was his “Last day, for now… This is not goodbye, but a see you soon” before thanking the cast and crew who worked on the project. The Disney Plus series will also introduce a Daredevil character, Echo (Alaqua Cox), and she’s also set to get her own spin-off series. Take a look at the photo from Jeremy Renner below. 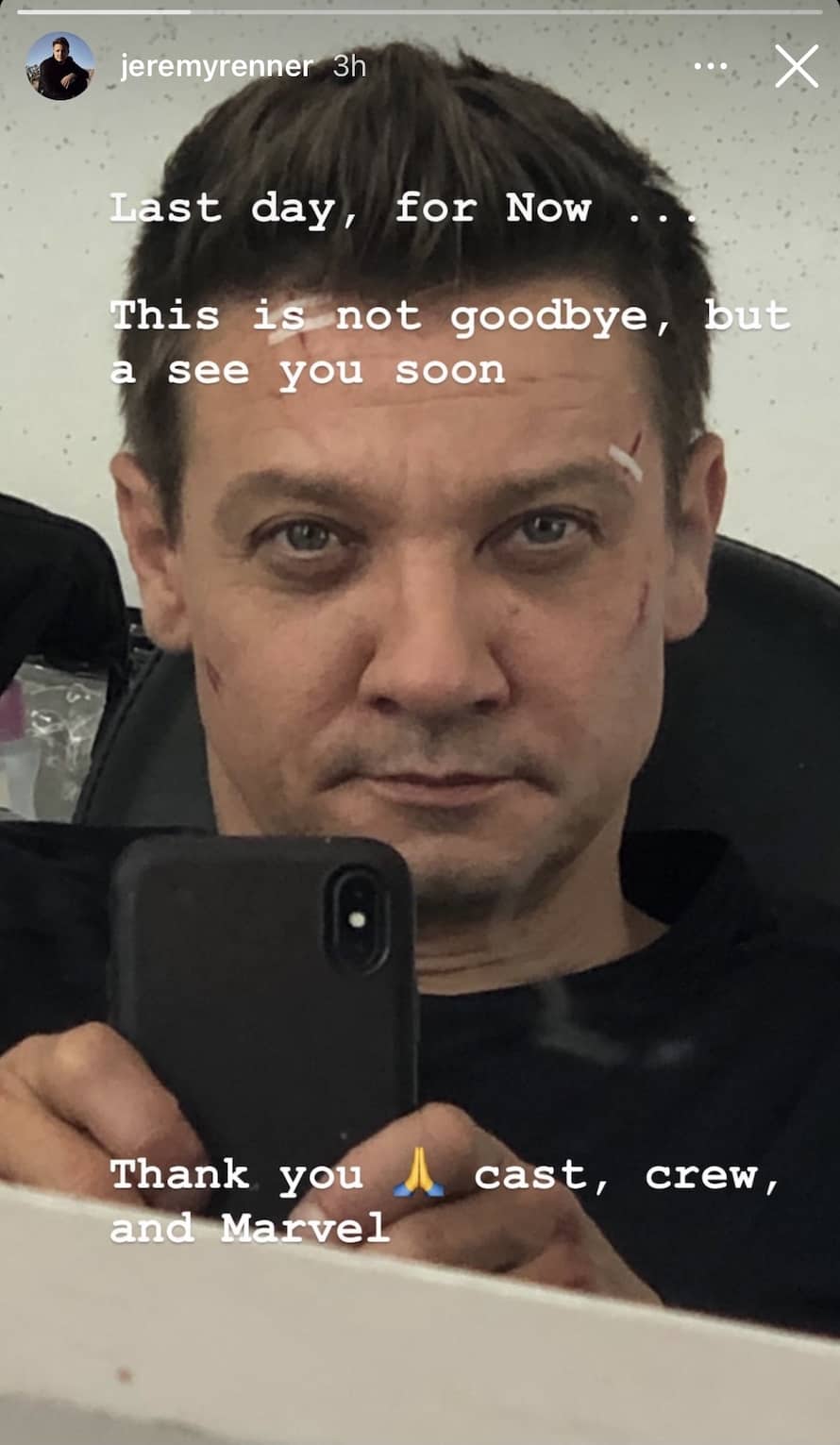 Are you excited to see what’s in store for the Hawkeye series? How do you think Clint will meet Hailee Steinfeld’s Kate Bishop? Sound-off in the comments below!

The upcoming Jeremy Renner series previously added Amber Finlayson and Katie Ellwood to its director list. Amber Finlayson and Katie Ellwood, also known as Bert and Bertie, are best known for helming Amazon’s coming of age comedy, Troop Zero. In addition, the series has also added Rhys Thomas, whose resume includes directing episodes Saturday Night Live and Comrade Detective. It is currently unknown how many episodes these three will direct.

Full details on Hawkeye are currently under wraps, though the Disney Plus series will follow Jeremy Renner’s Clint Barton as he prepares to pass the mantle to Kate Bishop. In the comics, Kate Bishop is the third character and first woman to assume the Hawkeye name.

Jeremy Renner and Hailee Steinfeld’s Hawkeye is just one of the many projects Marvel Studios is developing for Disney Plus. These projects include The Falcon and the Winter Soldier, WandaVision, Loki, What If…?, Hawkeye, Ms. Marvel, Moon Knight, and She-Hulk.

Hawkeye is currently scheduled to premiere on Disney Plus in Fall 2021. Stay tuned for the latest news regarding the future of the Marvel Cinematic Universe on Disney Plus, and be sure to subscribe to Heroic Hollywood’s YouTube channel for more content!