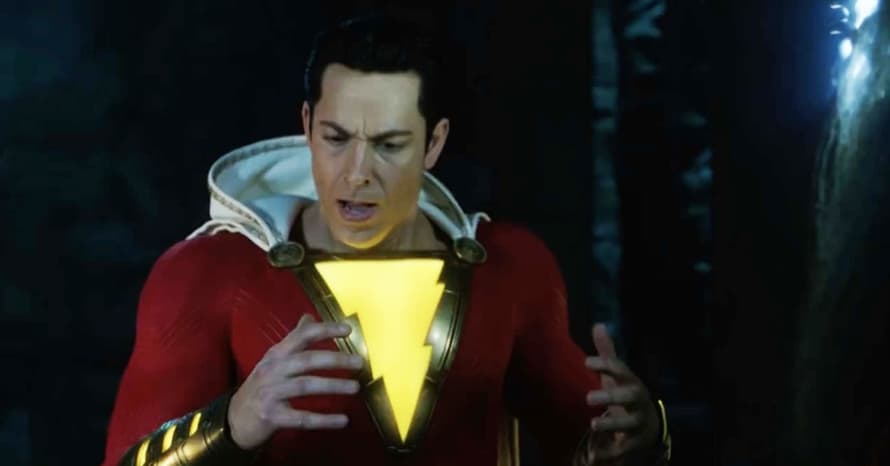 Zachary Levi wore his cape in new set photos from Shazam! Fury of the Gods.

Principal photography is underway on the highly-anticipated superhero sequel to the 2019 DC Extended Universe film. Earlier this week, set photos revealed actor Zachary Levi in an updated suit. The 2019 film, while praised by critics and fans alike, featured a suit that some criticized for its padding that was often compared to those seen at theme parks for meet-and-greet photo ops.

In contrast, the new Fury of the Gods suit showcases a more refined design with minimal padding, looking more natural to Zachary Levi’s body. It also features patterns that feel consistent with suits we’ve seen on other heroes in the DCEU, including Henry Cavill’s Superman and Ben Affleck’s Batman. The first set photos featuring the new suit did not include the white cape, with some speculating that it would be implemented into the design in post-production, similar to how Superman’s cape was created in Man of Steel.

New set photos have hit the internet, showing off Zachary Levi in the suit once again, this time complete with the cape. You can check out the new set photos from Fury of the Gods down below:

What do you make of these new Fury of the Gods set photos? Are you excited to see Zachary Levi return? Sound off in the comments below.

Shazam! Fury of the Gods is once again directed by David F. Sandberg and will feature the return of much of the original film’s cast and will introduce Helen Mirren as Hespera, Lucy Liu as Kalypso and West Side Story (2021) actress Rachel Zegler to the DCEU. Shazam!: Fury of the Gods will soar into theaters on June 2, 2023.