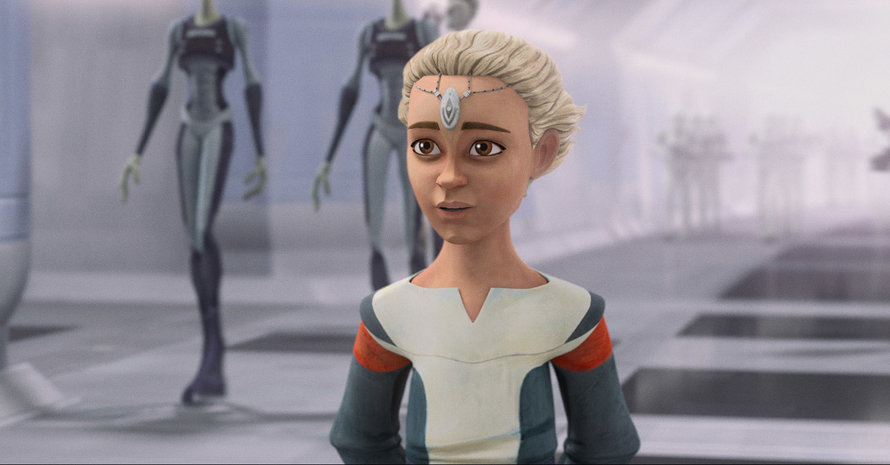 On May the 4th, Star Wars fans got the chance to enjoy the first episode of The Bad Batch, with another episode hitting Disney Plus this Friday. Ahead of the show’s premiere, Heroic Hollywood got the chance to attend The Bad Batch virtual press conference, where head writer Jennifer Corbett, supervising director Brad Rau, and voice actor Dee Bradley Baker previewed what’s to come in the latest Star Wars animated series. Now that the first episode is out, here were some of the highlights from that press conference.

Dave Filoni has been heavily involved with Star Wars animation ever since boarding The Clone Wars. While Filoni still has his hand in animation, he’s also working on the various live-action projects spinning out of The Mandalorian. This has led to a passing of the lightsaber situation that is inherently Star Wars, with a new generation of writers and directors spearheading the new animated shows. “I got to work with Dave on Star Wars Resistance, which was such a great experience.” Corbett shared. “Getting the chance to develop the series with him, it’s like a master class in writing Star Wars.”

Each Star Wars animated series to date has also featured its own style of animation. However, The Bad Batch‘s visuals strongly resemble what we saw in the final season of The Clone Wars. “The Bad Batch is a spiritual successor to Clone Wars, so we wanted to honor the style and the legacy of that.” Rau revealed. “The way that it’s designed is still the legacy of The Clone Wars, but with a little more detail.”

In the premiere, Clone Force 99 encounters Saw Gerrera on the planet Onderon where they get a new point-of-view on the Empire’s reign. It’s expected The Bad Batch will continue to pull back the layers and show different perspectives of a new controlling power ruling over the galaxy. “It’s the early stages, and I found it interesting to show planets and places that were happy that the war is over, and they don’t really understand the implications of what an Empire actually means.” Corbett said. “It’s laying the groundwork for what everyone knows the Empire to be later on.”

The episode also introduced us to the female clone, Omega. As the episode progresses, we quickly see Omega form a bond with Hunter that is very similar to what we’ve seen between Din Djarin and Grogu in The Mandalorian. Omega eventually joins Clone Force 99 as they escape Kamino and search for their new place in the galaxy. “It’s more of an uncle/niece, or a father/child dynamic, but not entirely.” Baker divulged. “Because Omega has her own potential of powers. [LAUGHS] Maybe. It’s interesting to see all of that unfold.”

As many Star Wars fans speculated, Crosshair became an agent of the Empire by the episode’s end, and it appears he will be an ongoing threat for Clone Force 99 throughout the season. “He’s not someone who’s running around with the team, he’s assisting the team, in a very strategic and laser-focused kind of way.” Baker noted before his turn. “It’s in his nature to be apart.”

What did you think of the premiere? Will Crosshair eventually get his chip removed? Is Omega a clone of Palpatine? Feel free to speculate in the comments section below!

Here is the synopsis for Star Wars: The Bad Batch:

The series follows the elite and experimental clones of the Bad Batch (first introduced in The Clone Wars) as they find their way in a rapidly changing galaxy in the immediate aftermath of the Clone War. Members of Bad Batch — a unique squad of clones who vary genetically from their brothers in the Clone Army — each possess a singular exceptional skill, which makes them extraordinarily effective soldiers and a formidable crew. In the post-Clone War era, they will take on daring mercenary missions as they struggle to stay afloat and find new purpose.

Star Wars: The Bad Batch is executive produced by Dave Filoni, Athena Portillo, Brad Rau, and Jennifer Corbett with Carrie Beck as co-executive producer and Josh Rimes as producer. Rau is also serving as supervising director, with Corbett as head writer. Dee Bradley Baker is behind the voices of Clone Force 99.

Star Wars: The Bad Batch hits Disney Plus every Friday. Stay tuned to Heroic Hollywood for all the latest news surrounding Star Wars, and subscribe to our YouTube channel for exclusive video content!