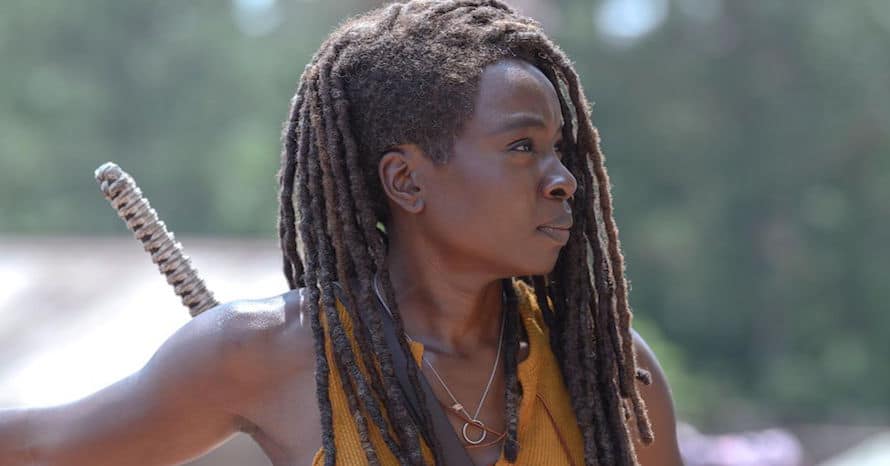 On Sunday, Danai Gurira made her final series regular appearance on The Walking Dead after having portrayed Michonne on the show since the third season. However, the latest episode also sets up the possibility of future adventures for Danai Gurira’s Michonne by having her encounter a new group along her journey to find Rick Grimes, whom she learned may have survived the bridge explosion that was believed to have killed him.

With The Walking Dead franchise set to expand with three feature films starring Andrew Lincoln as Rick Grimes, many fans of the series have been suspecting that Danai Gurira’s Michonne could now be featured in at least one of those projects. During an interview with The Hollywood Reporter, series chief content officer Scott M. Gimple noted that it was “fair” to assume Danai Gurira might reprise her role as Michonne in one of the upcoming films, but also suggested she could a receive her own story as well:

“Is it fair to assume? It’s definitely fair to assume that. There might even be her own story along the way. Some of it has to do with the way we’re playing around with the story right now. There’s this whole new story strand opened up with her departure. Angela and I talked in very broad ways at the beginning of the season that with Michonne, who stopped and helped someone in Andrea, it changed her life. We look at these stories as, ‘What was the point of her story? What was it all about?’ At the end of her journey where she has these unbelievable hints about Rick and a direction to go in, she still stops to help someone. That’s who she is and who she’s become. In some ways, even though she has a whole lot of story ahead of her, that completes her journey on The Walking Dead.:

However, Scott M. Gimple added that at this point, any plans they have for Danai Gurira’s Michonne are only ambitions at this point and nothing concrete has been set:

“With the films, we definitely have plans. But even beyond the current plans, I have some ambitions. I love her and Rick together, but I love seeing her as the pure lead on her own, too. It just so happens that there’s a lot of story terrain to cover. But you’re right: it’s ambitions. Right now, the plans have to do with the feature film.”

Would you like to see Danai Gurira return for a standalone movie about Michonne? Let us know in the comments section below.

Here is the official synopsis for The Walking Dead season 10:

A few months after the end of Season 9, the collected communities are still dealing with the after effects of Alpha’s horrific display of power, reluctantly respecting the new border imposed on them, all while organizing themselves into a militia-style fighting force, preparing for a battle that may be unavoidable.