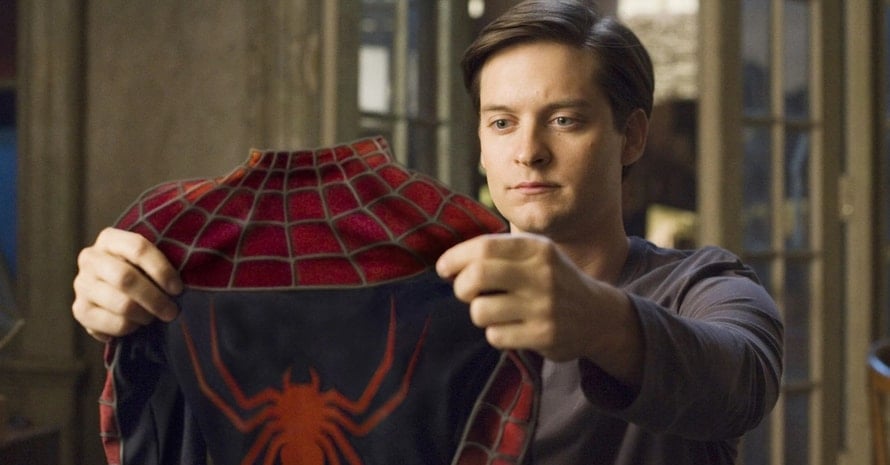 Tobey Maguire was recently seen at a costume store in North Hollywood as rumors continue to circulate that he will be returning as his Spider-Man in Tom Holland’s upcoming sequel.

Tom Holland’s untitled Spider-Man sequel from Marvel Studios is currently shooting in Atlanta as surprising casting news comes out in relation to the project. The first domino to fall that alluded to the multiverse was the news of The Amazing Spider-Man 2 star Jamie Foxx returning as Electro. Then Benedict Cumberbatch’s Doctor Strange was in talks to appear in the next Spider-Man flick before he films his own multiverse movie. On Tuesday, it was reported that Alfred Molina will reprise his role as Doctor Octopus from Spider-Man 2 and now Daredevil star Charlie Cox is the latest name to circulate the sequel.

With all the casting news coming out, it’s expected that we will get to see a live-action Spider-Verse with Tobey Maguire and Andrew Garfield as their respective wall-crawlers once again. As the rumors reach an all-time high, Just Jared spotted Maguire in the parking lot of Wardrobe Workroom in North Hollywood, California for what could be a costume fitting for the next Spider-Man film. You can check out the photos for yourself below.

Tobey Maguire was spotted arriving at a costume shop this morning amid the rumors of him joining the #SpiderMan3 cast – see the new photos! https://t.co/RLpNB4dH1z

Do you think Tobey Maguire in Tom Holland’s Spider-Man 3 is a done deal? Comment below!

Here’s the official synopsis for Spider-Man: Far From Home:

Spider-Man: Far From Home is now available on Digital HD, 4K Ultra HD Blu-ray, Blu-Ray, and DVD. Stay tuned for all the latest news regarding Tobey Maguire and Andrew Garfield’s potential return in the upcoming film and be sure to subscribe to Heroic Hollywood’s YouTube channel for more content.