SYNOPSIS: Bruce Wayne and the city he loves have changed dramatically following the events of “The Joker War,” but Batman and his mission are eternal. But not everyone thinks that should be the case… The mysterious vigilante known as Ghost-Maker has known Bruce since they were teenagers, and he’s made his decision. It’s time Gotham City had a new hero. 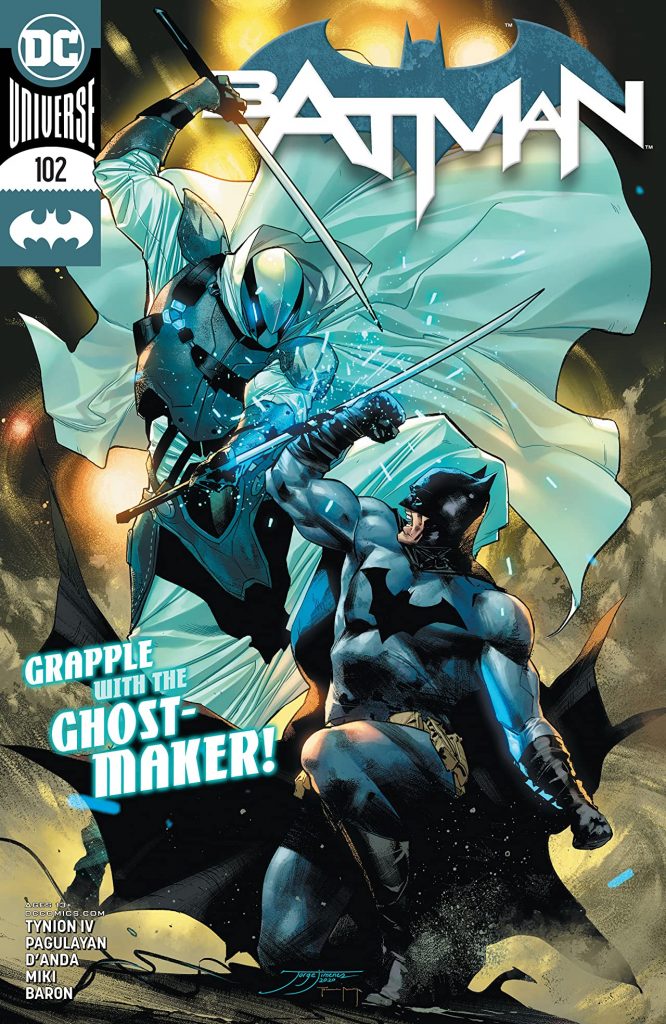 We’re starting a new beginning in the pages of BATMAN this week. The last issue laid the groundwork for what’s to come, so now we’re to see those teases come to fruition, right?

I won’t repeat my usual critique of James Tynion IV, but the time came to deliver on what he said (just two weeks) was coming. And he did. Was it exceptional? Not exactly. It was fine.

After stellar stories concerning Batman in the past few years (THREE JOKERS, DOOMSDAY CLOCK, WHITE KNIGHT), we’ve started getting used to grand storytelling in comic books. That’s put pressure on all of the others to step up their game and get us tuning in to these twice-monthly books. Peter J. Tomasi has done an exceptional job since taking over DETECTIVE, but outside of “The Joker War” (which had mixed results), Tynion’s work has been fine.

And that’s just what this issue is. It’s the definition of a standard. It’s setting the stage for a short arc, involving a new villain with a tie to Bruce Wayne, and ends on a cliffhanger so we come back in a few weeks. That’s how these books have gone and will continue to go.

The art comes from Carlos D’Anda and Carlo Pagulayan is also fine, but a massive difference from Guillem March and Jorge Jimenez. No disrespect towards the hard work from the two, but nothing really stands out here. It’s just more of the same. And that too is fine.

Overall, not trying to be harsh, but fans have been spoiled with dramatic comic stories lately. We’ve spent time and (big money) on these books, and have been rewarded graciously. With DETECTIVE pulling off twice-monthly with style, there’s even more pressure for BATMAN to follow suit.