SYNOPSIS: Tensions are sky-high in Gotham City following the events at Arkham Asylum, and public opinion and unrest are starting to boil over. The Dark Knight has his hands full juggling the investigation of the reappearance of an old enemy and the rise of a new gang in Gotham called the Unsanity Collective…Gotham City is getting more dangerous by the minute! 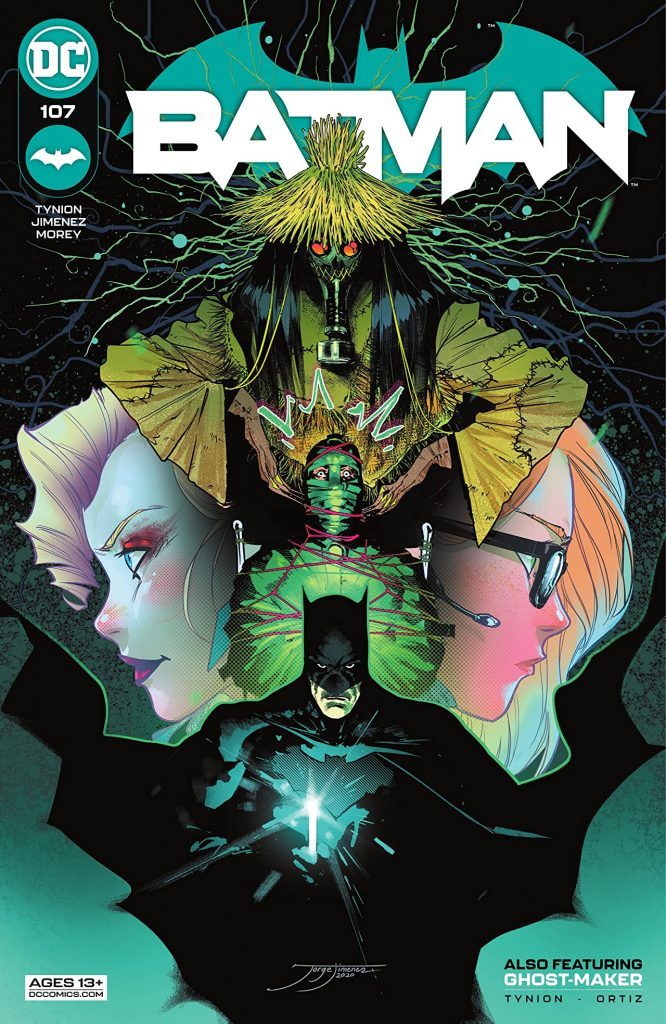 We’re two issues into the post-FUTURE STATE era with BATMAN, and I’m enjoying what we’re getting. Writer James Tynion IV is laying the groundwork for an interesting Scarecrow story while continuing to add tension to Mayor Nakano’s anti-mask drama. It’s patient but effective, and Dr. Crane is creepy as ever.

As for our Dark Knight, he’s there too. If anything, that’s been my biggest critique of the writer on this book. He’s ambitious for sure, trying to tell a massive story. I just think he’d serve best on a team-up book instead of BATMAN. This issue was good, bookending with our hero and end in what’s to be an exciting next issue. However, we also dip into ANOTHER tease for a character, which has become a Tynion gimmick. And perhaps my biggest eye-roll is the use of Ghost-Maker. The character hasn’t sat well with me since his debut and continually feels forced on us. I don’t think he serves a purpose and retracts from more of this story being focused on Batman (not to mention the backup story that we’re forced to pay for). Tynion’s focus is good, but it can be better.

There are no complaints when it comes to the art by Jorge Jimenez. The guy is on fire with his designs, opening the pages in dark, eerie shadows and then transporting us to the bright, futuristic neighborhood also in Gotham. Jimenez has range and brings his best to the variety of elements required in this book. If Tynion is lacking in some areas, Jimenez is making up for them. Solid artwork throughout.

I’ve been hard on the book in the past, but I’m enjoying this tale. Tynion is a really good writer, and horror is definitely a strength. That’s why he’s zoned in so well on the Scarecrow and is delivering the goods. Jimenez is meeting every challenge head-on, lifting this title back toward its acclaimed status.  If Tynion can just keep this Batman story about Batman, then BATMAN will be a must-buy. – Ryan Lower