SYNOPSIS: What happens when the Dark Knight and the Man of Steel wake up on a skull-shaped planetoid packed full of cybernetic versions of their entire rogues galleries? Figure out why they’re being worshipped like gods, that’s what! What is this strange new Brainiac’s endgame-and how did Batman and Superman’s own villain database mutate into this twisted, metallic death planet? The mystery deepens as our heroes’ allies desperately search for their missing comrades. 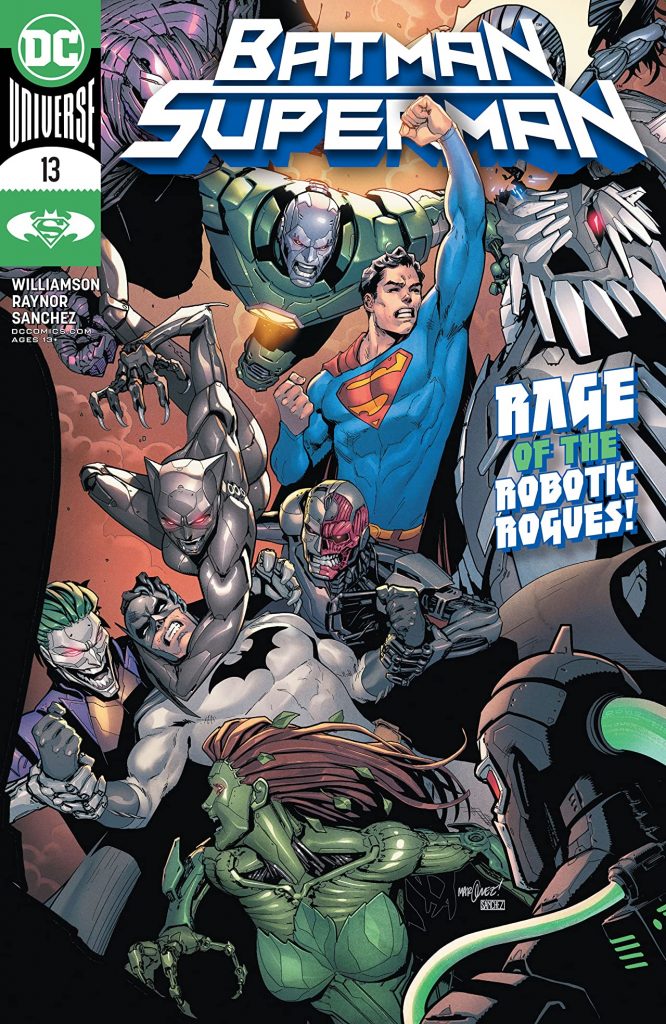 Sometimes you get a craving for a fast-food burger, a side of fries, and a soda. Maybe even a milkshake. You know it isn’t good for you. It doesn’t have any real health benefits. You could probably even get healthier and more nutritious food for the same or less money. It doesn’t matter though. That’s not the point.

Batman/Superman #13 opens with Steel and Batwoman still on the hunt for the missing titular heroes but in “Planet Brainiac” Part 2 the duo has taken the search to outer space where they encounter and (surprisingly quickly) defeat a robotic version of Doomsday before getting swarmed by an army of robot troopers.

The story moves on to a really fantastic splash page featuring a captured and injured Batman taking on a Robo-Riddler in both a match of wits and a giant-sized chess game. But the Riddler isn’t the only robot rogue “challenging” The Dark Knight, the rest of the Gotham baddies are present along with electronic versions of Superman’s villains to take on the Man of Steel. It’s this section that makes up the bulk of the issue, which is a good thing. It works the best of what we see in the issue, delivering plenty of engaging action beats and the fun identifying all the bad guys that get the high tech treatment.

Eventually, Steel and Batwoman are able to locate Bats and Supes just in time to see Brainiac (or wait, not Brainiac…but kind of Brainiac) morph into a Batman/Superman hybrid and attack Earth!

The framework behind the story is actually pretty solid. Batman’s villain database has been corrupted by a bit of “rogue programming” and is seeking both understand the concept of a villain and to help Batman Superman understand their villains better. Batman’s ability to outsmart the program, leading into Robo-Joker’s creation, isn’t just fun and reflective of the character, it’s a smart bit of storytelling as well. Writer Joshua Williams made a smart choice in utilizing it here to balance up the big loud action that dominates the center of this issue.

The “not really Brainiac but a chunk of his programming” thing is a bit weird and clunky. The story is billed as Planet Brainiac, and the robot designs are intended to call back to him but the script awkwardly needs to make the distinction that this is not in fact Brainiac. There may be a purpose for this distinction coming in future entries into the arc, but for now it seems odd and the story did a clumsy job informing the ready of it.

Speaking of clumsy, parts of the narrative here are just goofy and don’t make sense within themselves. A key example of this is found in Batwoman’s presence in space. Not only does it seem out of place for the reader, but Williams feels the need to call direct attention to it while immediately showing her at the controls of the Justice League space ship and talking about her new spacesuit. Why does Batwoman understand the controls of a space ship and why does she have a “new” space suit?!?! It’s also interesting to note just how easily our heroes are able to defeat the mechanized monsters. For being a powerful program, Not-Brainiac seems to create significantly powered down villains.

Generally, the artwork in this book is really pretty great to look at. Max Raynor seems to be having a blast in the visual creation of the rogues and the smash-up fight scenes wiz along at high speed while remaining easy to digest and moving the story along. The only critique I really have is that the head shape and facial appearance of Superman shifts from page to page. It was noticeable enough that it pulled me out of the story at a couple of points and made me question if it was the same character.

Batman/Superman #13 isn’t a healthy or nutritious type of comic story. This is a value meal double cheeseburger. If that’s what you’re looking for, you’re going to come away happy. It’s certain to satisfy you in the moment and will either leave you guilty at how much you enjoyed it or not remember it distinctly at all.

It has plenty of loud superhero fun but falls short of being groundbreaking or very substantive. – Garret Grev