SYNOPSIS: NEW VILLAIN ALERT: THE COMPOSITE BATMAN/SUPERMAN!
Enter the Composite Batman/Superman! The Dark Knight and the Man of Steel are trapped inside the Brainiac protocol’s deadly moon base, and this psychotic A.I. will not stop until it has merged with the beings it believes are its creators! And merging is exactly what our heroes are doing, as the deadly new fusion of the World’s Finest duo emerges to wreak havoc in the name of Brainiac! Can Steel and Batwoman turn the tide and save their friends? 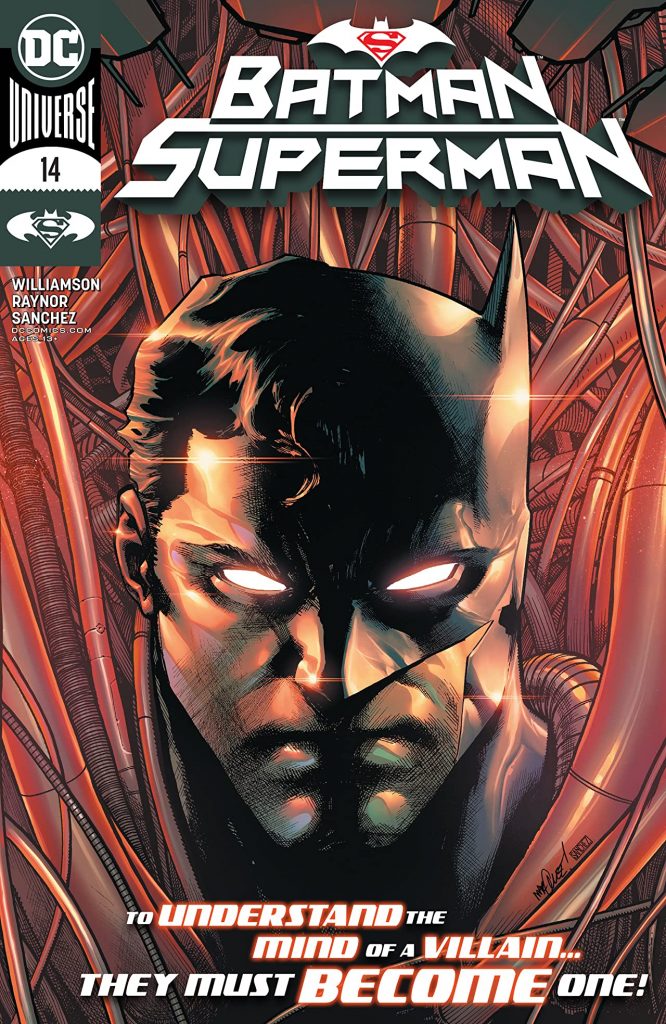 Whether it’s monthly or every couple of weeks, a new issue arrives. You read it. I think about it. You likely read it again and gather your thoughts more specifically. Then you write. At least this is my approach.

The challenge is, particularly with most modern comic storytelling, you are seeing only a part of a whole. You might be getting the set-up, a middle chapter, or a conclusion, and you need to assess each issue on its own merits while not completely ignoring the bigger picture.

Batman/Superman, like Justice League (the other title I review), has been in a period of different creators jumping aboard to tell mini-arcs and each storyline has had bits that land solidly and others that fall a bit short. If you’ve read my past two reviews on this title you’re aware that I thought the “Planet Brainiac” storyline has fallen a bit short. It hasn’t been that they’ve been “bad” issues, but they contained challenging narrative choice, character inclusions, and inconsistent art to this point.

With Batman/Superman #14, the installment is both the strongest of the arc and improves upon the whole overall.

On the surface “Planet Brainiac” is a big goofy loud team-up tale, placing our titular heroes and their allies in a crazy outer space scenario facing villainous robotic doppelgängers and a computer program gone mad. That remains unchanged in issue #14, but the story beneath the spectacle becomes clear thanks to some very strong work by writer Joshua Williamson. Without getting preachy, overly derivative, or redundant, Williamson aptly turns a cartoony saga into a look at intentions gone wrong, misunderstanding, and finding purpose in confusion.

That might sound deeper than you’d expect and you’re right, I certainly didn’t expect the turn that was presented within a comic featuring an android mashup of Bats and Supes, but it’s there for the reader that is paying closer attention to words and themes than punches and explosions. The “booms” and “bangs” are still there mind you and the book never reaches too far away from the fun-times premise, but finding that Williamson has something more introspective to say was a welcome surprise.

One of the reasons that this issue is able to live in both the worlds of “fun” and “thoughtful” is thanks to the artwork of Max Raynor. Raynor deftly delivers the action and awe of a crazy story of heroes vs. robots. The work is appropriately larger than life, in both the frequent use of large panel storytelling and character design. Raynor has a bit of Ed McGuinness bulked-up animation inspired aesthetics which feels right at home in a story that could have served as an excellent Saturday morning cartoon three-parter. The colors by Alejandro Sanchez are rich and stick to the primary palette making the whole visual presentation big and bold throughout.

It isn’t a perfect issue. Odd character choices don’t justify themselves as much as Williamson seems to want to force them to. There is an entire page dedicated to clunky exposition and some inconsistencies around shifting costume design. None of those reduce the quality of the issue consequentially.

Overall, Batman Superman #14 is the best entry in “Planet Brainiac” and serves as a great example of why it is often worthwhile sticking with a storyline that doesn’t “wow” you with its initial issues. – Garret Grev