SYNOPSIS: After the City of Bane, The Riddler’s takeover, The Joker War, and more, the people of Gotham City have had enough. The world is changing for Bruce Wayne, and the question he must ask himself is: What role does the Batman have in a city that rejects him? As the year barrels forward into what will become a turning point for The Dark Knight, Batman must grapple with the very citizens he has sworn to protect…while a familiar face looms large as a new threat on the horizon: Damian Wayne! 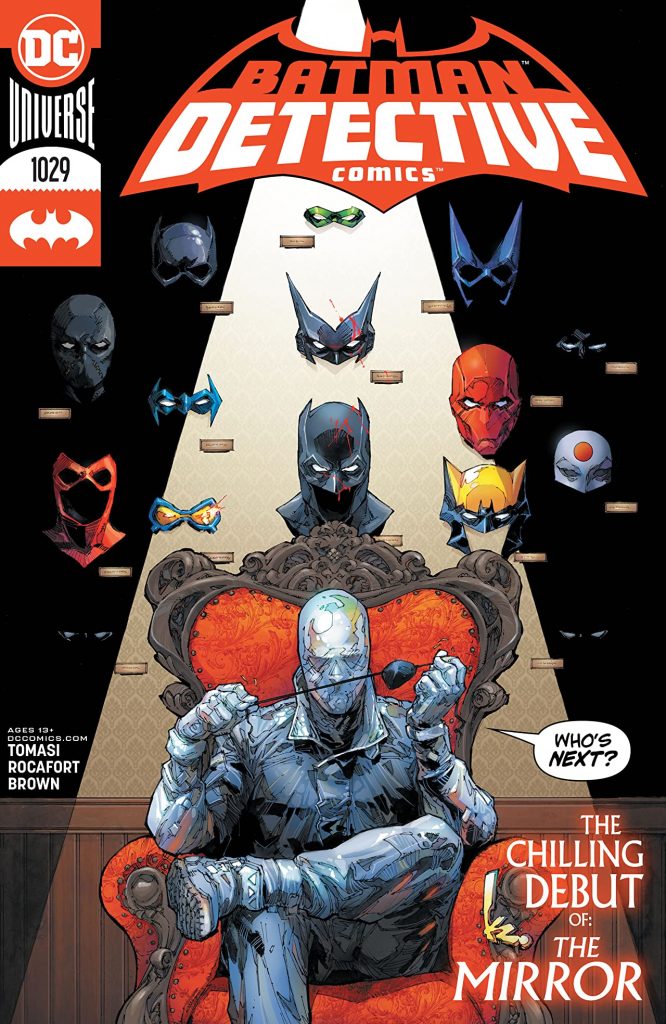 Detective Comics #1029 is a breath of fresh air.  While we are still feeling the effects of “The Joker War,” you get an inside look at how Bruce Wayne is coping.  This is a story unlike any other that Tomasi has given us in his run.  Tomasi is joined by artist Kenneth Rocafort and he brings some interesting elements to the page literally, while adding a new toy to Batman’s arsenal.

Gotham’s favorite son is adjusting to his new life, packing and reminiscing over old photos of Alfred.  Mr. Wayne isn’t the only one adjusting to post Joker-War life. There is a new mayoral candidate in town: Former member of the GCPD Christopher Nakano.  Nakano is politicizing the recent events of “The Joker War” and running a heavy no-mask campaign.  We all know when there is an opportunity to be had in Gotham there is a villain who always rises to the occasion and here Tomasi introduces us to the Mirror.

In the past, I have been a bit critical of writers when they try to create/update members of the Gotham Underground.  Snyder’s Mr. Bloom, Tynion’s Colony Prime, and Tomasi’s Arkham Knight are the first that come to mind.  I believe Tomasi was at his best when he was writing classic villains, Mr. Freeze, Joker, Killer Croc, Deadshot, and Two-Face.  The jury is still out on the Mirror, but I do dig his motives or his manipulative ways, depending on your thinking. Claiming to represent all of Gotham, using the mirror angle to “reflect” the people. Using their outrage with masked vigilantes, even though he himself wears a mask.

Tomasi crafts a wonderful Bruce Wayne story that is very personal.   Recently it seems stories like this are few and far between.  I always appreciate the balance a story like this can provide and Tomasi does it so well.  Bruce is adjusting to his new lifestyle, but he is still keeping up with appearances.  Sure, Bruce does use his favorite coping strategy “Batmanning.” There is just something special about seeing Bruce Wayne in the public eye while still helping those in need.  I like to think of this as Batman incognito.

Kenneth Rocafort is back in Gotham since we last saw him in issue #1026 and he brings a unique page and panel style with him.  The entire book is framed for a lack of a better term.  All of Rocafort’s panels fit within a certain margin.  I can’t really make out the image in the background, but it looks like the panels are almost breaking through something; with bits of debris falling in front of the panels.  This is a very unique style; I can’t say that I have seen this before.  Rocafort does love rectangles; horizontal, vertical; while keeping splash pages to a minimum.  In these tight spaces though Rocafort packs a punch.  The chase scene is exhilarating; hostages and ski mask thugs combined with Batman parasailing from the back of the escape vehicle. Just a typical night in Gotham City.   I appreciate Rocafort’s ingenuity in this scene. After Batman commandeers the escape vehicle the crooks think they have The Dark Knight at a disadvantage. Here we see one of his wonderful toys. Hiding in his cowl is what may be the most creative gadget in recent memory, cowl darts.

Detective Comics #1029 is a nice setup and tease of an issue.  Getting us ready for what is to come in Gotham.  Tomasi introduces a new villain in the Mirror and a new obstacle in mayoral prospect Christopher Nakano and providing an even bigger tease at the conclusion of the book.  All while providing a personal story about a man trying to cope with dramatic changes to his life.  Artist Kenneth Rocafort delivers a great effort with two beautiful action pieces and a very unique take on panels and the pages themselves.  I must say I think this is his best work out of the three issues of Detective that he has drawn.  The creativity between these two is spectacular, the subtle hints of political mask culture, new gadgets outside of the utility belt, cameos by Nightwing and the Bat-Poles are the cherry on top.  I’d call this a must grab for your Tuesday pull list! – Peter Verra