SYNOPSIS: Damian Wayne has made his move against a familiar threat from Bruce Wayne’s past-so why has the former Boy Wonder targeted none other than Tommy Elliot-a.k.a. Hush? It may have something to do with the Black Casebook that Bruce liberated from The Joker’s territory in the monumental Detective Comics #1027…but how far will Damian go to avenge this grudge from his father’s past? 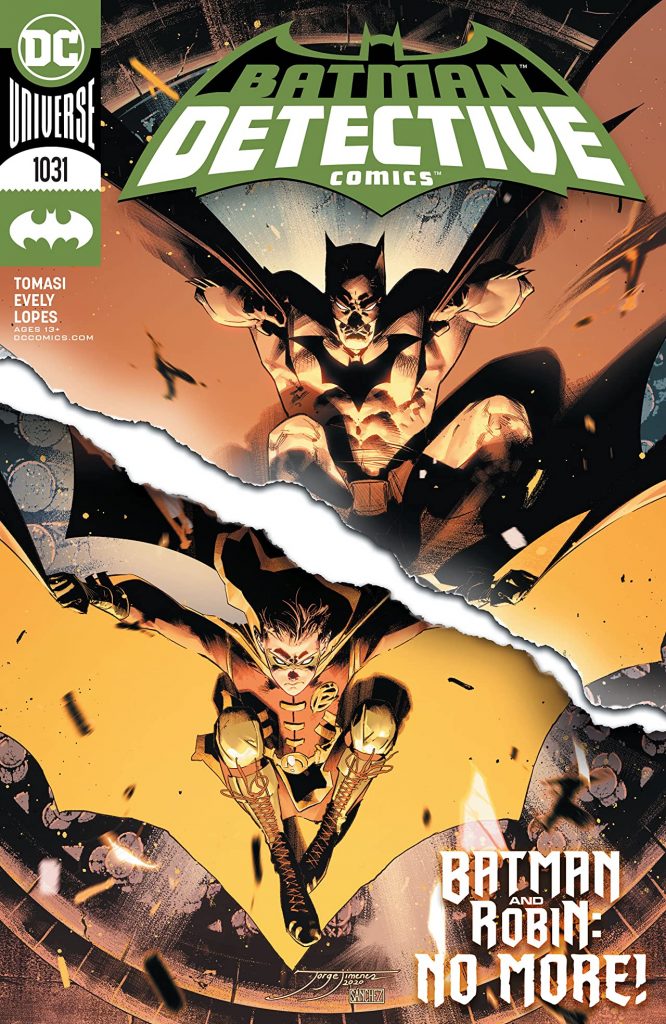 DETECTIVE COMICS #1031 continues the political thriller that has been established previously while adding some wonderful wrinkles.  Tomasi does a fantastic job here juggling an ensemble cast that any fan of the Bat-family will thoroughly enjoy. The artistic pairing of Bilquis Evely and Mat Lopes once again grace the pages.  Evely with her clean pencils, beautifully detailed scenery, and backdrops.  While Lopes continues to shine bright in dreary old Gotham.

The themes that Tomasi presented in the last issue get more fleshed out. The Mirror has much more of a presence than he did prior.  We see The Mirror doing his best to try and play all angles, trying to pit each part of the city against each other.  While reading this issue one can’t help but compare it to current events, much like what is going on in our own country Gotham is a city divided.  With The Mirror leading the charge vs the masked vigilantes that protect and watch over the city.

The two parts of the story that really stand out to me are Damian’s detective work and Batman’s interactions with Gotham itself.  It seems that Damian has been written differently very differently of late.  I first noticed it in Batman: Ninja then again in Batman vs TMNT.  Damian from my past experiences in both comics and animation has been a brash know it all teenager.  Now he is acting more like a traditional Robin, although he has given up that identity. Here his detective and interrogation skills seem to almost be on par with Batman.  I have never been more impressed by Damian; it’s like he is finally getting it and I couldn’t be happier with this transition.

In my last review, it was the artwork that gave me vibes of the 70’s era of Batman comics but here it’s how Tomasi drives the story.  It’s been a while since we have seen Batman acting out in the public with the people, granted here is interacting with an angry mob but we never see him this intimate with the citizens he protects. There is a very powerful scene early in the book where Batman intervenes in a fight between two teens tagging the side of a building.  While it takes place in a modern setting it did bring me back to those back issues of the blue and grey Batman patrolling the city by literally walking down the street.

Towards the end of the book, our normally silent but stoic hero pleads with a large group of Gothamites.  He begs the citizens to open their eyes and take note of who is the true menace to the city, reminding them that the masks they have turned against fight for them and their safety.    Usually, we only see Batman interact with the GCPD or a select few individuals.  Here he has a chance to speak directly to those he has devoted his life to and he makes every word count!  It was a very moving moment in the book.

Bilquis Evely really brings me back to Bat-artists past and in my last review, I compared her artwork to the legendary Jim Apparo; but here in this issue it almost feels more similar to Darwyn Cooke. The more I see of her artwork the more I appreciate her style. Relying on thin strokes of her pencil and the use of shade and shadow to create depth.  Not one character is overly detailed but the backgrounds behind them are full of life.  Her artwork is simple yet effective, you won’t find cleaner pages in any book out there.  What I found so enjoyable is seeing the members of the Bat-family crouched on different rooftops while their capes flow.  Doesn’t matter if they are just surveilling the scene or diving into action, this is some of the best cape work we have gotten in a Bat-book in a while. My only gripe in this issue is that Signal’s cowl makes him look a lot like Wolverine.  It’s a bit too wide for my taste and not vertical enough but that is a minor nitpick.

It’s not often that a colorist gets mentioned in back-to-back reviews, but I feel like Mat Lopes needs some recognition.  I really enjoy how he colors backgrounds that make the heroes pop.  The way he works his magic in Damian’s interrogation scene really gives it that noir feel, the one light source is enough for that dramatic effect.  The mob scene as well is so interesting, the citizens are some shade of red-orange while the heroes are traditionally colored. It’s an interesting take on those horizontal pages, well done.

The latest issue of DETECTIVE COMICS is just as good as the last.  Tomasi is slowly telling a mystery story that feels like it’s the peak of his run.  The relatable environment really draws the reader in while adding the wonderful Batman finishing touches to please all fans.  A city divided, a father and son relationship broken, and the return of a villain who seems ready to pounce on Gotham at its weakest since “No Man’s Land.” – Peter Verra