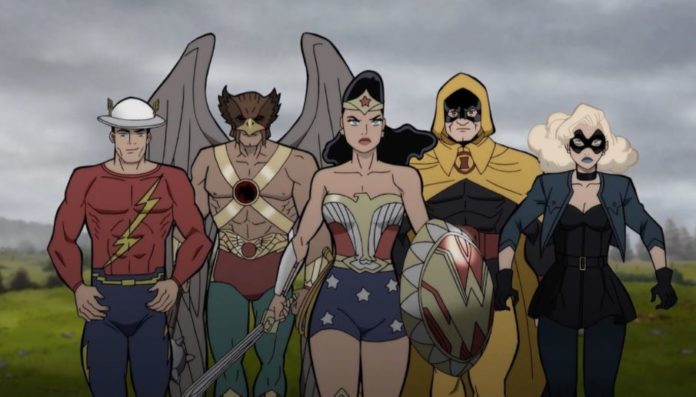 As someone who is a fan of The Justice Society (I guess it’s the history buff/teacher in me as well as being a fan of period films), I’m really looking forward to seeing this. I’m also excited to see the JSA in the upcoming BLACK ADAM movie. In fact, I’ve been advocating/lobbying for a full-on live-action Justice Society movie on the big screen. Hell, I’d be down with a JSA spinoff prestige series on HBO Max after their debut in BLACK ADAM. I suppose this will have to tide me/us over for now (and yes, I know the JSA is in STARGIRL).

JUSTICE SOCIETY: WORLD WAR II finds modern-day Barry Allen – prior to the formation of the Justice League – discovering he can run even faster than he imagined, and that milestone results in his first encounter with the Speed Force. The Flash is promptly launched into the midst of a raging battle – primarily between Nazis and a team of Golden Age DC Super Heroes known as The Justice Society of America. Led by Wonder Woman, the group includes Hourman, Black Canary, Hawkman, Steve Trevor, and the Golden Age Flash, Jay Garrick. The Flash quickly volunteers to assist his fellow heroes in tipping the scales of war in their favor, while the team tries to figure out how to send him home. But it won’t be easy as complications and emotions run deep in this time-skipping World War II thriller.

JS:WWII will debut later this year on Blu-ray and Digital from Warner Bros. Animation and Warner Bros. Home Entertainment.

For more details, hit any of the links provide — like THIS ONE. – Bill “Jett” Ramey