SYNOPSIS: For years Kirk Langstrom has struggled with his monstrous alter ego, Man-Bat, and the serum that transformed him. But he’s finally hit rock bottom following a devastating setback, and he’s going to take his anger out on every single citizen of Gotham City. Will the combined might of Batman and the GCPD be enough to stop Langstrom once and for all? Or will this just be the start of Man-Bat’s devastation? 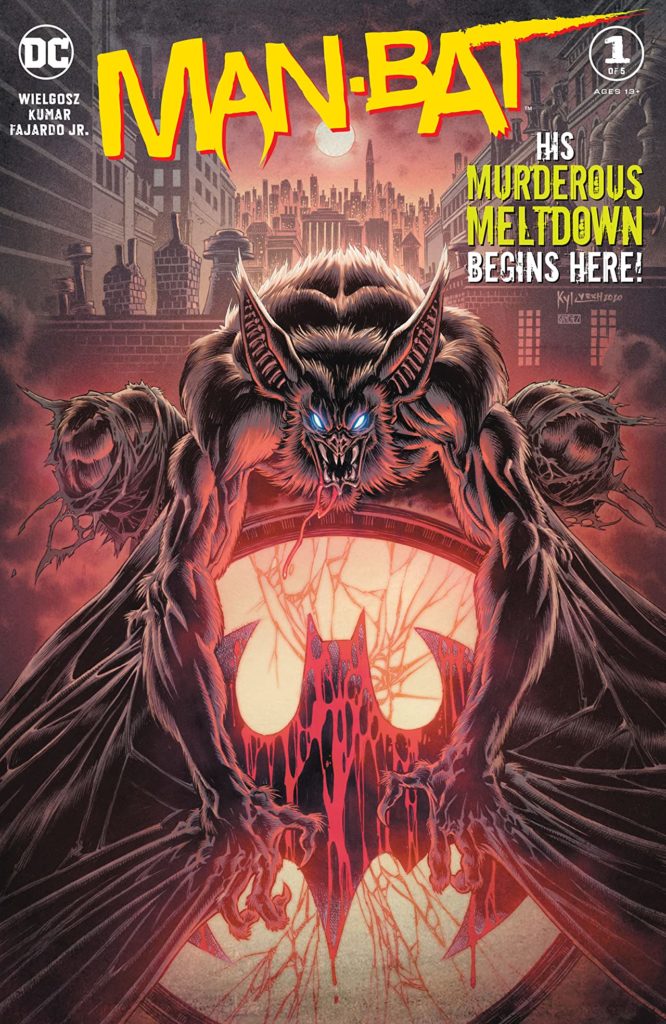 Ironically, I am reviewing this new Man-Bat series after Garrett Grev embarrassed me on the Batman-On-Film podcast’s trivia portion.  So I am going to consider this my redemption piece.

Man-Bat is the fourth volume in the character’s history, and this is a five-issue mini-series by writer Dave Wielgosz and artist Sumit Kumar.   An issue filled with wide ranges of emotion and a few new twists on the other bat in Gotham City.

Wielgosz has crafted an exciting evening in Gotham in the first issue.  The reader gets drawn into the relationship between Kirk and Francine Langstrom.  Wielgosz does a magnificent job writing the couple’s dispute after Francine finds some Man-Bat serum in their home.   The readers will feel distrust and disappointment in the argument.  We have all been in this situation before; we have all let down a significant other at one point in time. People say things they don’t mean; they use family examples to try to reach you.  Moments such as this are beyond relatable.  Kirk is a man who is an addict; he doesn’t see things straight, and Francine is on her last nerve, but it’s just too late. She gave Kirk a chance, and his addiction is just too strong.

Two of the book’s most intriguing parts are the new duality element for Kirk and Man-Bat and Batman’s sense of compassion.  From what I remember in the past, Man-Bat either has control, or Kirk does.  Wielgosz writes the character in an almost Two-Face approach,  where they share the same space and are interacting with each other.  I think this is a fresh idea having the inner battle between the two.  I don’t think I’ve seen a more sympathetic portrayal of Batman in a book recently.  From stopping the GCPD from gunning down Man-Bat to the speech, Batman gives Kirk in the Batcave.  Batman is reiterating Francine’s points earlier to try and reach Kirk and make him see the light.

Wielgosz writes a version of Kirk Langstrom that is truly lost.  Unable to be reasoned with, he can’t come to the grips of reality and refuses to listen to everyone around him.  He can’t understand that he is the one who is getting in his way.  While Man-Bat is taking over physically, Kirk has lost all mental control and is in a free-fall towards doom.

Sumit Kumar provides the interior artwork for the book, and I would compare Kumar’s style of art to Bilquis Evely from Detective Comics #1030-1031.  Thin and precise linework while not relying on hatching instead of utilizing shading.  Kumar shines early on in the book with the Langstrom argument; extreme close-ups, full-body shots, sweeping shots of the dispute wonderfully flow from panel to panel.  The emotion is rich; you see the anger, the shock, and the angst on both characters.  The best panels are the long rectangles on page three. Kumar uses an impressive technique that looks like a rotating camera around the couple, very creative.

That is not the only part of the book where Kumar shows the depth of their emotional spectrum.  Batman and Kirk’s panels in the Batcave bleed through the page as Batman explains the difference to Kirk of what he did instead of what he intended to do.  You see Kirk go from the anger of being captured to the guilt of failure.  In these panels, Kumar and Wielgosz work in harmony, putting this sympathetic Batman on full display.  You feel that at one time, Batman was genuinely pulling for Kirk to find himself. I have only seen Batman this disappointed in one criminal before, Two-Face.  This book’s emotion is on high alert both in words and the pencils—what a thing of beauty it is.

Man-Bat is an all-out blitz on comic book fun!  The reader gets a crisp new take on a villain who has been absent in Gotham for some time.  Wielgosz does a fantastic job setting up this story from the first page, introducing the motivations for this new obstacle in Langstroms’ journey. You get a glimpse of Kirk Langstrom at his most vulnerable moments. You see him try to prove himself, and now it seems like he has bitten off more than he can chew.  The book is filled with a wide range of emotions and is extremely relatable.

At a more than reasonable old school price of $3.99, I’d say this is well worth adding to your pull list for new DC day.  Looking forward to seeing how issue 2 follows up; that was one hell of a stinger at the end! – Peter Verra