SYNOPSIS: An all-new series teams the Dark Knight with Scooby-Doo and the sleuths of Mystery, Inc.! When Batman discovers his original purple gloves have gone missing, Velma, Shaggy, and Scooby-Doo travel back in time to Batman’s Year One to solve the case! Will this “Glove Story” have a happy ending? 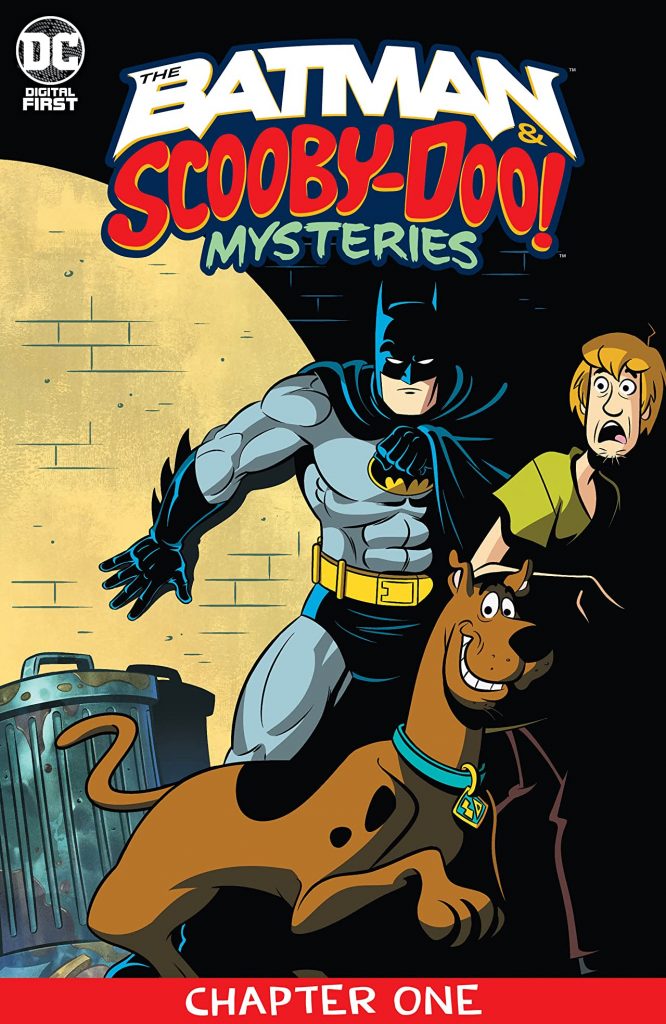 Disclosure: I was already sold on the idea of a Batman/Scooby-Doo team-up comic book the moment it was announced.

Thus, I knew that I was going to love THE BATMAN/SCOOBY-DOO MYSTERIES the moment it was announced and before I even read it.

Well now, thanks to the fine folks at DC Comics (FYI: BOF gets early looks at Batman comics for reviewing purposes), I have had the chance to read the first issue of this new DC Batman title and I did love it, as I expected!

See, Batman, Scooby-Doo, and I go a LONG way back.  Not only did a grow up a Batman fan, but watching the original SCOOBY-DOO Saturday morning cartoon in the early 1970s is one of my fondest childhood memories.  So just imagine how excited I was when Batman first teamed-up with Scooby and Mystery, Inc. in THE NEW SCOOBY-DOO MOVIES back in the day!  (THE NEW SCOOBY-DOO MOVIES episodes featuring Batman and Robin was eventually turned into the SCOOBY-DOO MEET BATMAN animated “film.”)

And don’t even get me started on how much I love the SCOOBY-DOO AND BATMAN: THE BRAVE AND THE BOLD animated film! (I’ve been banging the drum for more of these, so, well, how about more of these, Warner Bros.?!)

Back to this new comic book, it’s a whole lot of fun!  I’d say that Batman is a combination of the Silver Age and Adam West/BATMAN 60s TV series versions of the character.  Scooby and the Gang are depicted as, um, Scooby and the Gang and all that entails.  Based on this first issue, it seems that this series is going to be a love letter to Batman history, so I’m not completely ruling out a “Dark and Serious” version of Batman to show up at some point — though “Dark and Serious” is relative.

The plot of this issue — titled “Glove Story” — involves Batman being robbed and enlisting Mystery, Inc. to help him solve the case.  Apparently, the gloves from Batman’s original Batsuit (yes, the small purple ones) have been stolen and replaced by fake ones.  To find out what happened to them, Scooby-Doo, Shaggy, and Velma are sent back in time to Batman’s first year of crime-fighting, while the rest of the Gang remain and work with Batman.

Yes, it sounds goofy and it is, but it also works and is quite fun!  I’ll leave the plot discussion at that and let you all find out for yourself if Batman gets his purple gloves back and how/why they disappeared in the first place.

So, who is this issue — and this title as well — for, audience-wise?  Certainly, it’s aimed at kids 9 to 12 years old, give or take a couple of years.  If you are of my vintage and grew up watching SCOOBY-DOO on Saturday mornings (as I discussed earlier in this review) and reruns of the BATMAN TV series after school, I think you’ll enjoy this story and comic as well.  And while I know this isn’t everyone’s cup of tea when it comes to Batman, I still recommend Batman comic book fans give it a go too.  As I said, it’s a bit of a love letter to Batman and I think it’s worth at least giving it a try just for that.  And heck, for only a buck, well, 99 cents, it’s a pretty darn good bargain!

I thoroughly enjoyed issue #1 of THE BATMAN/SCOOBY-DOO MYSTERIES — “Glove Story” — and I’m looking forward to both reading the remaining 11 issues and reviewing them for you all here on BOF! – Bill “Jett” Ramey

Read THE BATMAN/SCOOBY-DOO MYSTERIES #1 for $0.99 by CLICKING HERE!