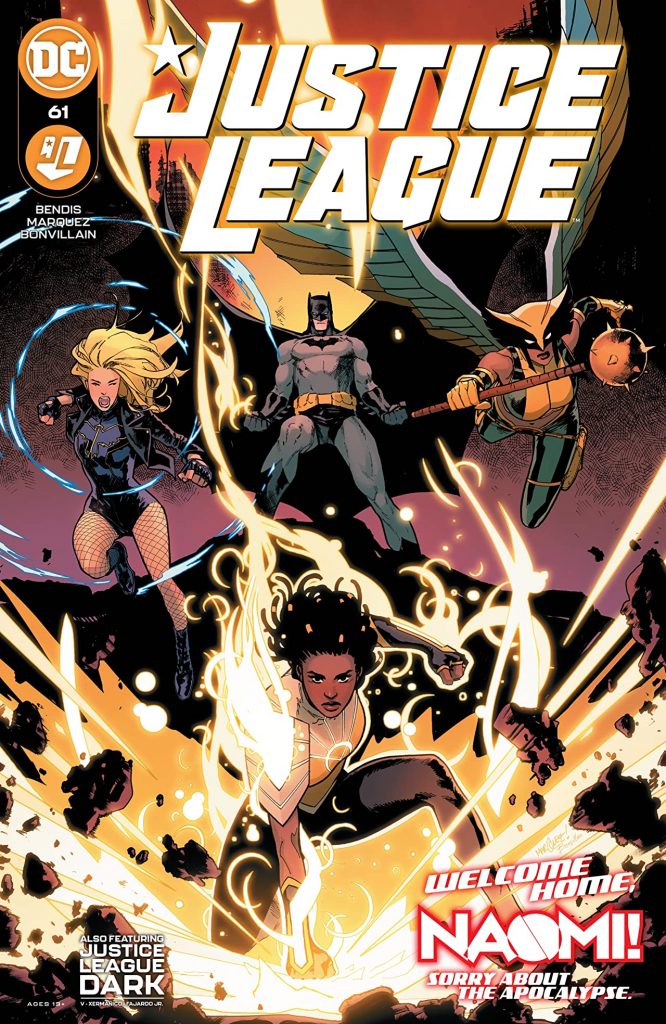 Justice League #61 finds the team on the homeworld of new “Mega Power” Naomi and would-be invader Brutus. It’s a desolate wasteland, a world torn apart by super-powered battles, with only stench, toxicity, and villains left to populate it. Here we are introduced to Brutus’s teammate McMurph, the inventor of transportation between worlds. Brutus fills her in on his experiences on Earth, of which he is a big fan despite his inability to conquer thanks to the presence of the Justice League.

These are far from the only foes on the planet and the Justice League has followed Brutus back to see this for themselves. The tricky thing here is all of the powered league members are having issues either acclimating to the planet or see their powers fluctuate. Hawkgirl seems to be having the best time as it seems Nth metal responds well to the environment while Aquaman is only shown in tears, unable to do anything besides utter the word “Death” before passing out and getting dragged away by a shadowy figure.

There’s a great big battle between Superman and Brutus, poorly timed for Supes as he has not control over his heat vision leaving him unaware of Brutus’s attack. There seems to be something else tilting the fight in Brutus’s favor as he shows strength and power he didn’t seem to possess on Earth. Even Black Adam isn’t able to be of much help and the issue ends with the two powerhouses of the league indisposed while the rest of the league looks on.

From a plot mechanics standpoint, the issue is “big” without really accomplishing too much. Bendis is on his third entry into the “Prisms” storyline but we don’t have a lot more clarity on what he has up his sleeve. In short, a mysterious big bad wants to invade Earth because his homeworld is awful so the league follows him to learn more and meets up with the rest of his people while their powers go a bit goofy. There are cool action scenes and some hints at Brutus’s boss Zumbado. That’s a lot of “doing” for one issue but not a lot of “developing.” What development we get comes is the explanation of Brutus’s motivation as well as a nice scene between Batman and Naomi. I get the feeling Bendis is using the story as a Zaomi vehicle, but I haven’t personally felt that the build-up as delivered to this point.

It’s a little thing, but I really like the opening page recap Brian Michael Bendis is doing at the beginning of each Justice League issue. Storylines are tricky things in comics, particularly in team books. There can be so many moving pieces that it is all too easy to lose track of what’s going on and who is all involved. In “Prisms,” the first storyline in Justice League as a part of “Infinite Frontier,” this hasn’t been an issue thanks to the opening page. It makes it easy to get caught up if you don’t remember exactly where things have left off or if this is someone’s a first-time reader of the title.

The art in the book is solid. David Marquez does a nice job depicting the war-ravaged and rotting planet long with its post-apocalyptic residents. Character work is strong and personalized, making sure the audience doesn’t lose track of the individuals making up the team. The panel work is fairly straightforward but he knows when and how to open up the scope of key pages.

Overall this is a fine entry in the current storyline. “Prisms” is proving to be an entertaining Justice League story but I’m hoping the upcoming issues do a bit more to move things along and provide some depths. It’s fun and pretty to look at but hasn’t quite found itself just yet. – Garret Grev

Garret Grev is a Batman On Film Senior Contributor and the host of the BOF Podcast.  Follow him on Twitter @GARRETWATO. 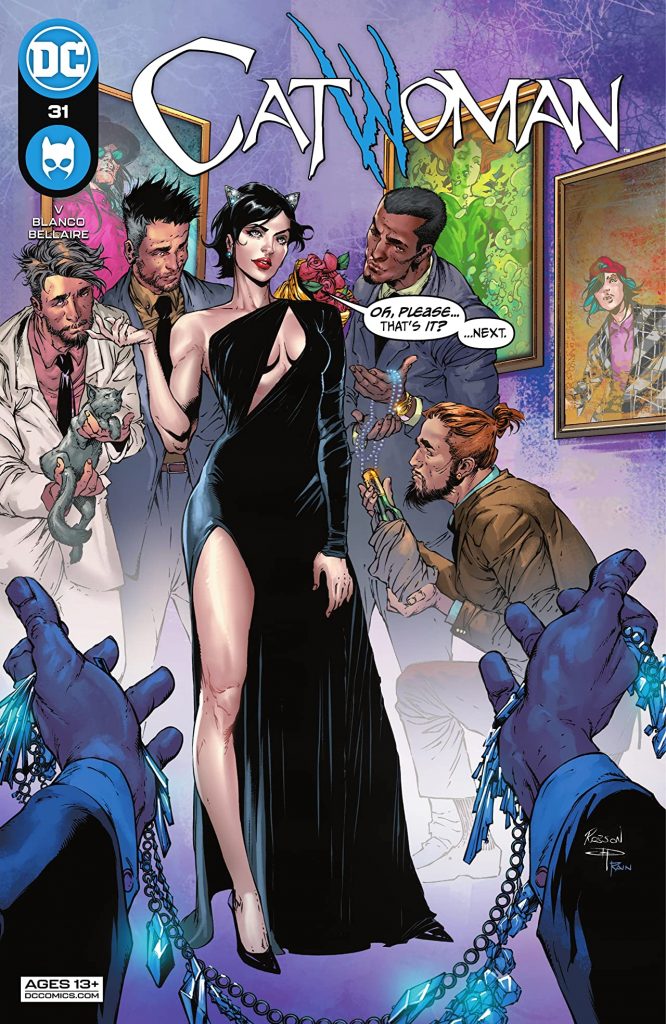 Mr. Roy, a procurer of unique items, is throwing a swanky party to show off his collection to Gotham’s most affluent socialites.  Selina and her Alley Cats have infiltrated the festivities to retrieve the most valuable thing that Mr. Roy has in his possession – Poison Ivy.  It’s a classic Catwoman caper!  It’s a good thing these kinds of heists always go off without a hitch… right?

Man, we’re lucky to have Ram V writing this book.  He is treating us to some darn good Catwoman stories.   This month, we have a dash of Mission: Impossible and a soupçon of Ocean’s Eleven – but make no mistake, it’s 100% Catwoman.  The storyline Ram’s been telling over these last few months is evolving quite nicely, but to be honest, I’m not entirely stoked about the inclusion of Simon Saint, which invariably ties this narrative to the Future State timeline (which on the whole wasn’t all that great).  But we’ll see how Ram V uses him moving forward.  He’s handled everything else pretty well so far.

Artist Fernando Blanco keeps the book in good shape – everything looks solid – but it’s the colors in this issue that are especially striking.  The heavy reds of Simon Saint’s offices and vivid greens of Ivy’s chamber make a bold impression.  And speaking of red and green, bringing Poison Ivy into this gritty crime drama really adds an extra layer of intrigue (and color) to the proceedings.  She’s welcome anytime.

If you’ve been enjoying this series lately, there’s absolutely no reason to stop here.  Pick it up!  And hey, be sure to check out the variant cover by Jenny Frison — it’s out-of-this-world gorgeous. – John Funderburg 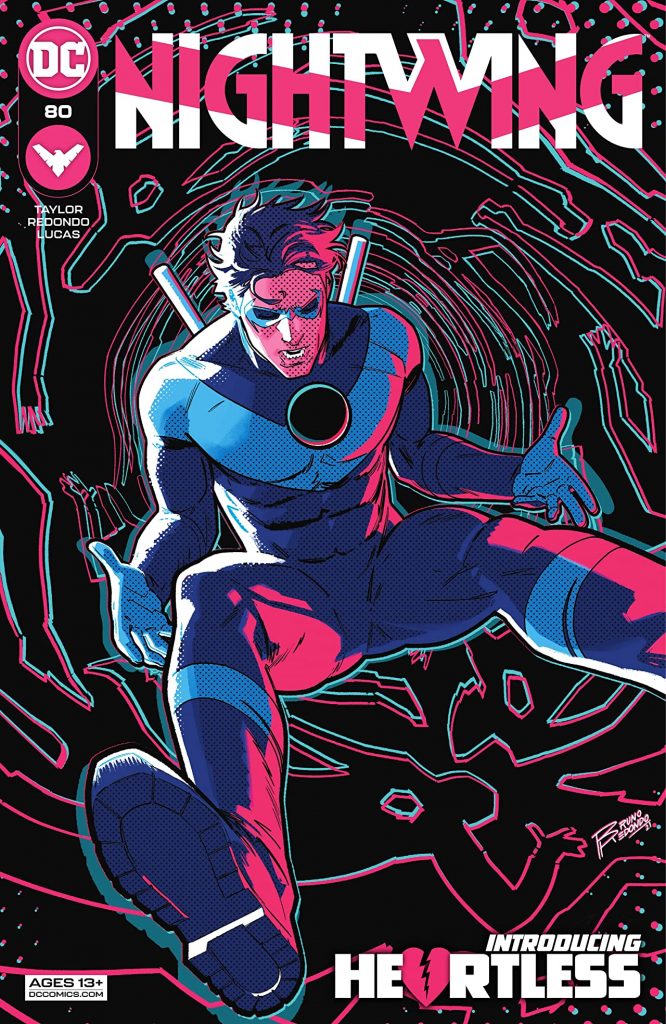 NIGHTWING #80 picks up the day after the events of the last issue. Dick Grayson is suspected of murdering a homeless man he had helped, the man’s heart having been ripped out by the new villain: Heartless.

If it wasn’t apparent three issues into this run, the artwork by Bruno Redondo is an embarrassment of riches, and the colors by Adriano Lucas glorious. The cover is pretty trippy and gives the impression that it’s paying homage to a classic Saul Bass title sequence. One page in this issue, where Nightwing and Tim Drake’s Robin team-up, could in itself be a comic book cover or framed.

The panels where we see characters move across rooms and upstairs are particularly fun to take in and give an extended look at Grayson’s new digs. I think they stood out because a few days before reading this story the cover for NIGHTWING #83 was posted and it featured the same movement tracking. Like a well-shot film this makes dialogue scenes play out much more smoothly.

Side note: the cover to the second printing of NIGHTWING #79 is beyond cool and, even though I own the first printing, I’m totally going to hunt down that cover soon!

On the writing side, Tom Taylor gave us another well-paced story. The focus is on the murder and other plotlines we’ve seen before, namely the Melinda Zucco stuff, are absent here. All for the best since it would only be a distraction and will be addressed fully following this issue.

NIGHTWING #80 is a very quick read that will be over before you know it. But pace yourself to enjoy the art and top-notch easter eggs, particularly the Gotham Rogues logo from THE DARK KNIGHT RISES and the immortal image of Adam West’s Batman trying to get rid of that darn bomb.

All in all, NIGHTWING #80 is another hit from this team. If there are any points taken off I’ll chalk that up to personal taste over the design of the goons … and a certain thought bubble Grayson has over who the best Robin is! – James Armstrong