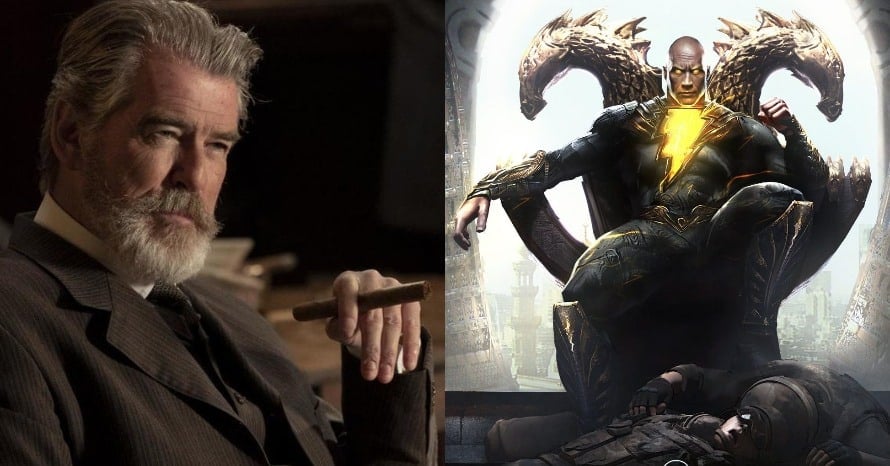 Perhaps being most-recognized for his tenure as James Bond 007, Pierce Brosnan is set to join the DC Extended Universe in the upcoming film, Black Adam. Alongside the film’s larger-than-life movie star Dwayne Johnson, Pierce Brosnan will portray Doctor Fate, a member of the Justice Society of America.

Black Adam recently wrapped production, and fans are excited to see Dwayne Johnson and Pierce Brosnan bring their beloved DC Comics characters to life for the first time in a live-action movie. While promoting his new film Cinderella in an interview with Collider, Pierce Brosnan was asked about working on Black Adam, and he had nothing but enthusiasm for the project:

“It’s an ensemble piece, Black Adam. You have Dwayne [Johnson], who’s at the pinnacle of his fame and fortune and success and popularity. He is magnificent as Black Adam. We are the Justice Society and there’s four of us, so we became a strong quartet of actors. The writing was very good. There was just enough beats. You just want three good beats. If you have three good scenes to hang your hat and your heart on, then you can make something of your days. For me, Black Adam had that, and Cinderella had it, in its own specific way.”

“It’s exhilarating. I had the most magnificent time and with Jaume Collet-Serra, who’s the director of Black Adam and the most recent film with Dwayne Johnson, Jungle Cruise…

With Jaume on Black Adam, I could say, ‘What about this line? What about that line?’ He had a very good ear and sensitivity.”

In addition to Dwayne Johnson and PIerce Brosnan, the DC film stars Aldis Hodge as Hawkman, Noah Centineo as Atom Smasher and Quintessa Swindell as Cyclone. Sarah Shahi, Marwan Kenzari, James Cusati-Moyer, and Bodhi Sabongui are also on board in undisclosed roles. Dwayne Johnson, Dany Garcia, and Hiram Garcia of Seven Bucks Productions are producing the movie with Beau Flynn of FlynnPictureCo. FlynnPictureCo’s Scott Sheldon serves as an executive producer.

Black Adam will hit theaters on July 29, 2022. Stay tuned for all the latest news surrounding the DC multiverse on the big screen, and be sure to subscribe to Heroic Hollywood’s YouTube channel for more exclusive video content!